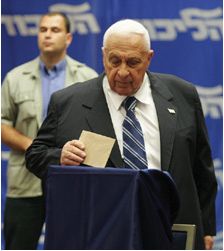 Ariel Sharon has good reason to be pleased with himself. Although his position as leader of the Likud Party is under threat from former Prime Minister Binyamin Netanyahu, his decision to unilaterally end the Israeli presence in the Gaza Strip last month appears to have paid rich dividends, particularly in diplomatic terms. An increasing number of countries, including several in the Muslim world, now seem inclined to agree with George W. Bush’s description of Sharon as “a man of peace.” They may not have forgotten his role as the architect of many of the illegal settlements in the occupied territories, as the overseer of the Sabra and Chatila massacres, or as the provocateur who catalysed the second Palestinian intifada; yet they see him as a changed man: a long-time hawk who, having seen the light, has metamorphosed into a dove.

If only that were true. If only there were some guarantee or even a reasonable likelihood, that the Gaza evacuation will turn out to be the first step in a much wider disengagement, and would be followed in short order by a withdrawal from the West Bank, leading to the establishment of a Palestinian state. But that is not going to happen.

One does not need to look to critics of Israel for confirmation of that view. Sharon’s acknowledgement of the continuing consolidation of West Bank settlements and revealing comments over the past year by some of his aides suggest that it doesn’t get much better than this: the Gaza pullout was undertaken without negotiations with the Palestinian side precisely because the intention is not to go much farther. A few strips of the West Bank may be used as a bargaining chip with Mahmoud Abbas’s Palestinian Authority, but the entire exercise was intended chiefly as a means of putting paid to any prospect of a viable and coherent Palestinian state.

If and when the occasion arises, there will be no shortage of excuses. “Liberated” Gaza is still effectively a prison, cordoned off on all sides by Israeli and Egyptian troops. Within the territory, the guards are now all Palestinian. Israel’s preferred model for self-rule on the Strip would be a totalitarian dictatorship, with Hamas disarmed and, preferably, disembowelled. Any demonstrations of militancy are likely to entail Israeli military incursions, although possibly not a reoccupation, given that the cost of maintaining that would be too high — unless Netanyahu becomes prime minister. 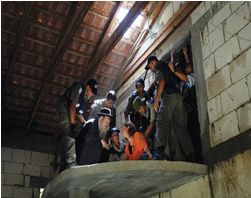 The end of 38 years of occupation cannot, of course, be dismissed lightly; even though “end of occupation” may be too optimistic an interpretation, it is nonetheless a significant development. Why did Sharon do it, in the face of vocal opposition from a small but vituperative bunch of Zionist extremists? Because as an experienced pragmatist the old warhorse envisaged a range of advantages, and the move was supported by a majority of Israelis. While the move was intended to effectively cripple the peace process, it could simultaneously be passed off as a brave step down the road to a two-state solution, with the United States playing its customary public relations role for the Sharon regime.

No surprises there, but it did seem a little strange when Muslim states started falling over each other in an effort to shake hands with Israeli representatives, for instance at last month’s United Nations summit. They have chosen, by and large, to feign ignorance of any devious motivation behind the Gaza move, whereas, on even the most optimistic interpretation, there hasn’t been so much as a substantial hint, let alone any evidence that it is the first in a series of measures aimed at establishing a long-term peace.

On these pages a little more than two years ago, I made the case for Pakistan’s recognition of Israel, provided the step wasn’t taken for the wrong reasons — among which I included pressure from the US and inordinate faith in the inadequate “road map” that was supposed to lead to a permanent settlement. That view is not incompatible with the argument that it would be a grievous error to offer diplomatic relations as a reward for a move that thus far remains unworthy of wholehearted commendation. Besides, there are compelling reasons for suspecting that the US, directly or otherwise, has been instrumental in facilitating the latest thaw.

As part of its recent free trade agreement with Bahrain, to cite but one example of extraordinary pressure, the US stipulated that the Gulf state must abandon its economic boycott of Israel. The tiny Gulf states, all of them keen to be seen as significant American allies — and all of them thriving on commerce while wary of Arab nationalism — are particularly vulnerable to hints and nudges from Washington. Qatar has had open connections with Israel since the 1990s, and the prospect of full diplomatic relations has lately been broached. The UAE has been denying persistent reports of exploratory contacts with Israel, but not a great deal of credence is attached to these denials. 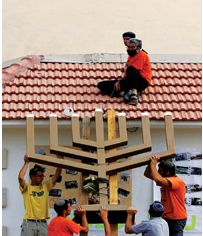 Less than 10 years ago, it was customary for the UAE press to refer to Israel as the Zionist entity. Still more ridiculously, Israel used to be obliterated with black marker in atlases and dictionaries sold in Abu Dhabi and Dubai. These absurd manifestations of supposed support for the Palestinian cause weren’t, of course, restricted to the Emirates. But when it came to Realpolitik, even Saudi Arabia was more than happy to turn a blind eye to Israeli assistance during the first Gulf war. By the same token, although the puppet regime of Jalal Talabani may be unwilling to establish open relations with Israel because it would thereby risk alienating a substantial proportion of its constituency, it couldn’t possibly be unaware of Israeli operations in parts of Iraq — not least in Kurdish areas, where the Israeli presence dates back to at least a decade-and-a-half. It’s worth remembering that a part of the neo-conservative establishment in the US turned its back on Ahmed Chalabi precisely because he was unable to deliver on his promise of ties with Israel.

There can be little question that Israel’s boast of establishing ties with 10 more Arab and Muslim states before the year is through must have been based primarily on assurances from the US, which is likely to have leaned on its allies to respond enthusiastically to the Gaza withdrawal. General Pervez Musharraf’s well-documented eagerness to ingratiate himself with the White House devalues his avowed stance that direct contacts with Israel will enable Pakistan to be more effective in advocating the Palestinian cause. Nor is it particularly surprising to discover that contacts between the two countries date back to 1984, when another general beholden to Washington recognised his reactionary government’s ideological affinity with Israel, but lacked the courage to openly acknowledge as much. Egypt, Jordan, Turkey and Mauritania have long enjoyed formal ties with Israel, while a number of other states — including Morocco, Tunisia and Qatar — have teetered on the brink of official recognition. At the UN last month, Israel’s Foreign Minister Silvan Shalom revealed that luminaries from several other Muslim countries had also been in touch, albeit “deep in the shadows, away from the public eye.” He held talks with Indonesia’s foreign minister in New York, and Spain is expected to facilitate further Israeli contacts with Jakarta as well as Kuala Lumpur at a conference in Madrid later this month. At the time of writing, Shalom was expected to visit Tunisia and Morocco, while Jordan’s King Abdullah and Egypt’s Hosni Mubarak were due in Israel.

It may not be too hard to argue that direct contacts with Israel are potentially a more effective means of influencing that country than a hostile approach that is all too frequently grounded in anti-Semitism. Demonising all Jews is as offensive and counterproductive as any other form of racism. Nor is there much merit in pretending — or believing — that everything that goes wrong in the world is somehow part of a Jewish conspiracy. Muslims in Britain have lately reiterated their objections to Holocaust commemorations, a negative approach that threatens to place them on a par with neo-Nazis. Some anti-Zionist Jews have, to their credit, decried what they see as a Holocaust industry. However, the Nazi campaign of extermination against Jews can unequivocally be condemned as one of the biggest crimes of the twentieth century without subscribing to notions that imply a Jewish monopoly on suffering.

As a certain proportion of Israelis recognise, however, the European Judeocide of the 1930s and ’40s makes the subsequent treatment of Palestinians all the more reprehensible. What’s more, there has been no indication thus far that this approach is about to change. Barely two weeks after the withdrawal from Gaza was completed, Israeli missiles were once more raining on the territory, supposedly to retaliate for rockets fired by Islamic Jihad, which in turn were said to be a response to the killing of three Jihad leaders in Tulkarm. Sharon, meanwhile, has warned that Palestinian elections scheduled for January will not be allowed to go ahead if Hamas is allowed to participate. Should that happen, Hamas intends to call off its ceasefire.

Gaza at the moment is in limbo: if it isn’t actually occupied, it isn’t exactly independent either. Will it, a decade or two down the line, be seen as a turning point or as a deceptive confidence-building measure? The latter must be considered the likelier option for as long as the US, Israel’s chief sponsor and financier, refuses to push its client towards the concessions that can bring peace to the Middle East.

Meanwhile, Uncle Sam’s other clients, all too eager to extend the benefit of the doubt to a nation whose history spells out the folly of blind faith, are meanwhile likely to fall flat on their faces. Will they, by then, have learnt their lessons? I wouldn’t bet on it.