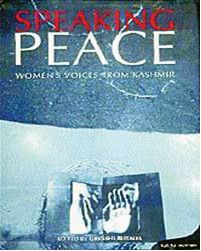 Whenever Kashmir is discussed, the most authentic voices come from the Kashmiris themselves. Preferably from the women of Kashmir, because they have been the victims of the worst atrocities throughout the conflict, and especially since 1989. For anyone who doubts this statement, Speaking Peace: Women’s Voices From Kashmir, offers complete evidence.

Urvashi Butalia, editor of the anthology, however is not content with merely describing the experience of women through years of conflict. The purpose of producing the book, she says, is to “mark a moment in the history of conflict in Kashmir and the involvement of the state and militants in it…, a moment when the presence of women, whether as victims, agents or perpetrators can no longer be ignored, a moment which makes it clear that any initiative for peace and resolution of the conflict must take women into account and involve them centrally.”

Additionally, she urges the women’s movement to rethink its involvement with the questions raised by women’s experiences. Besides accounts by Kashmiri women who have been victims of all kinds of excesses, the volume contains reports by human rights activists who visited Kashmir to ascertain the truth.

The first account in the book has been excerpted from Krishna Mehta’s all-time classic narration of the experiences of 1947. The wife of the district officer at Muzaffarabad, she lost her husband and then went through a harrowing experience while she tried to stay a step ahead of the tribesmen who had been let loose not only against the hated Dogra ruler but also against peaceful citizens of the state. She met both villains and knights, and offers cameos of peaceful inter-community relations as well as the destruction of these relations by hatred. Many Hindus were killed and deprived of their property but many also survived because of the local Muslims’ courageous stand in their defence. Women especially were vulnerable and many were driven to self-immolation.

Yoginder Sikand offers a condensed course in the history of women’s role in the development of Kashmiri traditions in Sufism/Rishiism. Two reports by the investigation teams, one by the Committee for Initiative on Kashmir and the other by Women’s Initiative offer testimonies of a sizeable number of families affected by the conflict. The former, after noting widespread violation of human rights of the people of the valley by the security forces, argues that “if the security forces continue to be used for internal security duty and there is no check on the abuse of power by the civil authority, there will be no possibility of arriving at the real solution of the problem.” The second describes the plight of Kashmiris as they are caught between “state terrorism and militants.”

An excerpt from Pamela Bhagat’s report on women’s health in Kargil district introduces us to Zaima, a middle-aged woman whose “health is waning but she has no time or thought for herself… she cannot think beyond September 5, 1999 when she lost two of her sons to anti-personnel landmines long after the war was over.” That is not all. The son who survived was grievously traumatised when he saw the dismembered bodies of his younger brothers and became incapable of doing anything at all.

Uma Chakarvarti’s “Kashmir Diary” enables us to meet, besides victims of violence, several women who have courageously battled in the cause of justice. She begins by recognising the “grim reality” in a valley that is “under siege and the army is an army of occupation” and we meet brave women like Shaukat Apa, Zareena, Mehbooba Mufti Saeed and finally Parveena Ahangar. Her 17-year old son was taken into custody in what seems to have been a case of mistaken identity and then never came back. The shock inspired her to establish and run the Association of the Parents of Disappeared Persons, which has been hailed as “one of the major civil society responses to state terrorism in the valley of Kashmir.”

Ritu Dewan visits Kunan Poshpora which became the most “famous” village in the valley when a unit of the Indian army raped over 30 women and children in a single day. In Bijbehara town, she meets Saira who was gang-raped by soldiers six days after her marriage. Her husband was forced by militants to take her back but having become “impure” she is humiliated and beaten at the slightest pretext. In Malangan village she finds Maryam, whose husband was stripped and his stomach ripped open by BSF and she was publicly gang-raped. The state of fear for children that haunts women is brought out in Munira’s decision to shave her son thrice every single day to save him from security forces because their manual describes “a typical militant as a boy between 15 and 27 years of age who is bearded.”

Neerja Mattoo and Hameeda Bano move away from tales of rape and plunder to look at courageous women of another kind, those who established educational institutions and fought against heavy odds to acquire eminence for integrity and commitment to human rights.

Sonia Jabbar’s journey to the sun temple is interrupted by the massacre at Chittisinghpora. From the very beginning, she doubts the story that the innocent Sikhs were gunned down by militants, and eventually “my hunch was proved right about the killers of Chittisinghpora. The incident was to become the infamous Panchaltan/ Pathripal case. The security forces were under pressure to prove the identity of the killers, so some of them picked up five civilians took them to a secluded hill, killed them, burnt their bodies, and then claimed that the victims were Chittisinghpora killers, killed, alas, in a fierce encounter.” The volume is rounded off with some interviews by Pamela Bhagat and a selection of reports in a New Delhi daily by Muzamil Jaleel, whose insightful coverage of the conflict provides passionate arguments for sanity.

The volume is not only a tribute to the heroism of Kashmiri women, victims of the worst forms of violence but also to a number of courageous activists who did not mince words while describing what they found in Kashmir and who could criticise the Indian state and its security forces and put their denunciation in print without anybody doubting their integrity or their love for their motherland.