The miniature painter, who gave us delightful teasers like the tongue-in-cheek Krishna series and the nuancedburqa paintings, sheds his humour as he struggles to distinguish and define the subtleties of primordial desire and reverent adoration. In his recent show of paintings at Chawkandi Art Gallery, Waseem Ahmed shifts from populist art probing an East-West friction and pointed gender discriminations to boudoir fantasies where he tries to locate the fine line between the sacred and the profane. In this move from apparent cultural conflicts to disturbing inner realities, his art turns away from chromatically vibrant pictorials within miniature boundaries towards stark monochrome effects on open-ended waslis. This swing in mood and application adds a new dimension to his artistic repertoire in terms of aesthetic vocabulary, painterly ability and conceptual breadth — not essentially as a miniature artist but as a modern painter.

The current body of work comprises sparse compositions of the nude body, enveloped in fiery veils of desire. The elated, consumed, helplessly entangled and readily succumbing postulations of the bare figures spell a losing battle of the senses. Waseem Ahmed lavishes much attention on the expression and body language of the partially revealed figure — male and female — to suggest an encounter between carnal desire and hallowed sentiment. Misty, vaporous clouds, composed of clusters of fine lines, fan out like flames emanating from an inferno, while some configure into fiendish animal profiles to enact a tableau of human passion pitched against inner demons. The theme initially appears to be bold and strong, but on prolonged engagement, fails to grip the viewer’s imagination as the issue is not resolved successfully. The artist’s projection of self as the male protagonist does not really add to the drama, in spite of the emphasis on theatrics. The emotional pitch is not palpable enough, most works seem contrived and repetitive. Playboy magazine visuals, mixed with acts of repentance and self-immolation, make for confused viewing. 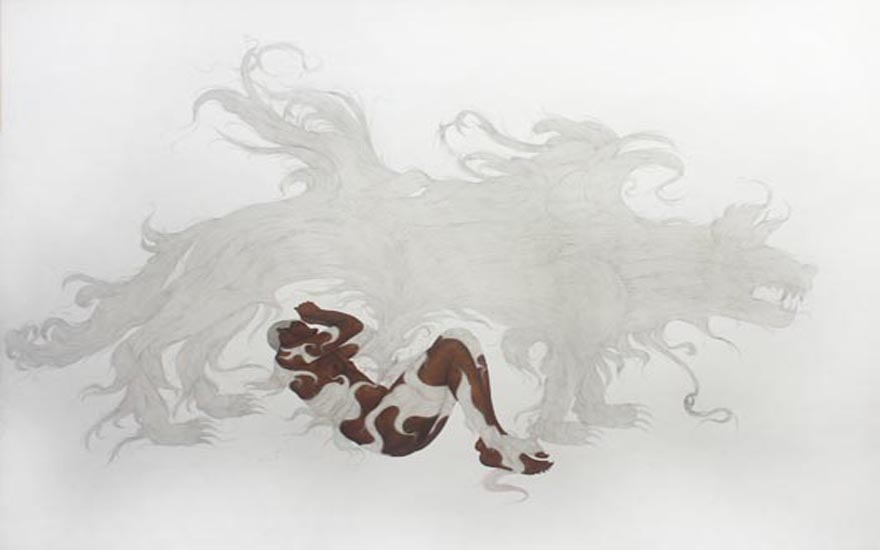 In the small group of dedicated miniature painters, Waseem Ahmed is among the few who consistently maintain their painting and drawing skills. He paints with an even more measured hand than before in this series. The brushwork is close and deliberate. Precise, well-blended tonalities animate the nudes with dimensional projection, as in the photo finish of western academic painting, but quite unlike the flat colour applications of the true miniature mannerism. Even his colour palette is a departure from the true spirit of album painting. It is the minutely intricate and striking ornamental qualities of the miniature that endow it with its brilliance, but these works echo the monochrome effects of sepia-tinted or black and white photography. Yet another aspect which goes against the ‘true miniature’ grain is the size of the works. Simply by being ‘miniaturised’ in scale, with no recourse to the genre’s technicalities, is not enough to declare the works as miniature paintings.

Today, the contemporary miniature enjoys a wide berth and such liberties are common but Waseem Ahmed’s evolution has always retained the spirit of the miniature, even during his abstract phase; however, in this collection there is a greater shift away from the principal genre. Most of the miniature painters who pioneered this contemporary revolution are moving towards hybrid stylisations but, fortunately, the genre’s contemporary format is still alive and kicking.

Waseem Ahmed has the ability to constantly strike out and break fresh ground. Carrying works to their logical conclusions, however, requires reasoning and logic. His innovative streak has brought forth some engaging earlier series followed by some not-so-interesting mid-career works, and now we have his new paintings which are well executed but fall short of being truly dynamic.