A blistering river of garbage splits the slapdash neighbourhoods of Karachi’s Muhammadi Colony in two. But on either side the effect is the same: a powerful stench pokes and taunts like a sweaty, swelling mob. Worse still, disease is rampant.

“Everyone dumps garbage in the nullah,” says Parvez Akhtar. Hearing this is shocking. Yet it has nothing to do with the littering. It’s simply that it’s impossible to tell that there’s a nullah where we stand. It seems more like a sprawling roadside dump: mounds of motionless garbage. Besides, it’s dry.

“No, it’s not dry,” says Akhtar. The 40-year-old has worked for an NGO within this katchi abadi for most of the past decade. “It’s only hard on top. It’s six metres deep.” That’s 20 feet — three men could stand one on top of each other, from the canal floor up, and still not reach the surface. As we continue along the nullah’s edge, I see just how hard it has become. Two boys crouch on the garbage-strewn drain. One holds a blue plastic bag and the other a stick. They dig through the mess, pulling out silvery strips that shine in the sun. I’m not sure what it is. “Machi (fish),” says a voice behind us. A young girl, maybe six years old, is watching us watch the boys. I turn around to see the boys flipping discarded fish parts into the bag. They’re gathering food for a mutt, which is sniffing around behind them on the hills of blue, green and pink plastic bags. The kids and the dog all move about as sure-footedly as they would down any alley. Somehow the garbage has concreted the nullah — and its serpentine mass of crap — completely over.

Dubbed Machar Colony by Karachiites, Muhammadi Colony is the epitome of a crowded, desperate and haphazard community. It’s suggested that as many as 700,000 people live here. If that’s true, then on a patch of land about 4.5 square kilometres, the settlement has a population density that not only is more than 75 times higher than that of Karachi as a whole, but also rivals some infamous slums of Mumbai.

Problems abound in this cramped squalor. And so much seems to stem from the nullah.

“I want to show you something important,” says Akhtar. Our van stops on the far side of a small bridge and he points towards the wooden shells of boats less than 100 metres away on the shore. This is where the sewage empties out into the sea. As my eyes follow the channel out, the dark, thick water stays behind. Small currents trickle seaward, but they just curl back along the left bank. It’s a vortex of currents. “How can the nullah get cleaned?” asks Akhtar rhetorically. “This is the endpoint.”

Designed to flush out the colony’s waste, the flawed sewage canal has broken down instead, providing zero benefit and much harm. Dogs and kids poke through the festering waste teeming with bacteria. And they’re not alone. Adults fiddle about too, trying to link hoses and pumps to the cracked communal waterline that piggybacks the river of garbage. Sadly, less than  1% of the residents make attempts to purify their water. With a stinking open sewer as everyone’s backyard, anaemia, malaria, scabies and typhoid are common. It’s as if the colony’s one and only kidney has failed, slowly poisoning the residents with the stored up filth.

But out of all the diseases that seem to be thriving, there’s one illness that has dominated medical radars: tuberculosis. TB is contagious and deadly — and seems to be unbeatable here. In Machar Colony there are no full-service hospitals to care for the three-quarters of a million people. Fighting TB rests on the shoulders of a few dozen private medical clinics in the shanty town. But the majority don’t have licensed doctors. Quacks undermine the entire anti-TB campaign: administering the wrong medication or an inadequate dosage leads to multi-drug-resistant TB. When that happens, TB takes up to four times as long as, and costs 100 times more than the standard eight-month treatment. Between 2000 and 2005, TB rates in the slum climbed from 15.5% to 19%. 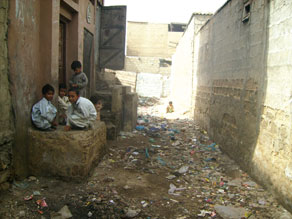 Dingy settlements of wood and straw huts amplify the problem. Each hut is small and narrow like a farmer’s tool shed but, somehow extended families of 10 or more people live inside. Brick-sized holes below the roofline constitute windows. They’re fine for keeping the sun and rain out, but unfortunately, are also good at keeping an airborne disease like TB in.

With the sun arcing overhead, Akhtar directs the van down a narrow lane. A group of kids follow behind. Some slap the back, others try to grab hold of the bumper and run with us. When we stop and get out, the kids tag along. Only three in the group of nine children wear chappals (slippers). Akhtar points out the greenish, scarred foot of a young girl. He describes it simply as “foot rot” and says it’s common here.

Earlier in the day, we went to a government-run school. The ground floor was flooded with stagnant water. All classes had to be shifted to the first floor. But the school’s only washroom was downstairs. Children still had to wend their way across the filth on a makeshift path made from a few bricks standing on end. It had been like that for weeks.

When I suggest to Akhtar that sanitation is the biggest problem, he replies first with a gentle shake of his head. “Eighty per cent of the work needs to be on health awareness first.” Akhtar says sanitation is futile without education. You can’t give people clean water and good sewage systems and expect them to maintain them if they don’t understand their critical value, he says. “People here don’t understand diseases and how they’re spread.”