A model caked with make-up posed and pouted at the entrance to Sab’s Salon for a photographer who merrily clicked away. I had arrived at the salon, not to be groomed and pampered but to interview a well-known face from our glam industry. Once inside, I waited in the shadows, behind the flash and glitz the camera clicks sparked off.  The door opened and in walked Nadia Hussain, finally, slightly late — but fashionably so — her four-year-old boy in her arms and her two-year-old girl dawdling beside her, holding on to her nanny’s hand. It was a show-stopping appearance, but then Nadia must turn heads anywhere she goes as she stands a head above the rest in all her 5 feet 10 inches.

After courteous apologies and explanations from Nadia for her late arrival, we took our place at the nail station. It was clear how much interest she evoked in everyone — from the workers in the salon to her colleagues — all of whom looked up at her with stars in their eyes. Once the kids were settled down, we began our chat, while the manicurist went about the task of buffing and painting Nadia’s nails.

Q:  We have seen you on the ramp, in TV commercials, in TV plays and on talk shows. How do you manage to juggle so many projects at one time?

A: Nobody in this field (media) is doing one single thing. Everyone diversifies in order to grow. If they are actors, they are not only acting but are also engaged in directing plus working outside the media, for instance designing clothes. This is how people like Humayun Saeed, Vaneeza Ahmed and Aijazz Aslam, to name a few, have all diversified their work. And I feel that’s almost a necessity. So I went from modelling to acting to hosting.

Q:  You have even hosted some shows on TV.

A: Yes, I had my own shows and some successful TV plays too. Other opportunities kept coming up. It all started when I was a guest in a show called Lux Style ki Duniya where a director spotted me and wanted me to work in his play. He even gave me four months’ time to think about it, since I was very unsure whether I wanted to get into acting at all. Eventually I consented, because he was so patient and I just wanted to give it a shot. From there, I went on to doing a serial with Rubina Ashraf called Phir Yun Love Hua, which was a big hit and received a tremendous response from both audiences and critics alike. Then there was Manay Na Yeh Dil on Hum TV, which was also a great success. But acting is very time-consuming and a lot more difficult to manage than modelling shows and fashion shoots. That’s why I do less and less of it.

However, I won’t shut myself off totally from certain options as they’re a good source of income, but I may take up certain types of projects less frequently — for a while at least. I switched from dentistry to showbiz for the same reason: I thought you can make much more money for the same amount of time that you invest in doing your house job or working full-time at a clinic. You get paid far better than a professional doctor who’s just starting out,  even when you are only doing fashion shoots. Also, I have come to a point where no one will refuse what I demand for any project, be it acting, modelling or hosting. So, the income is a good incentive to keep doing various assignments in the media. 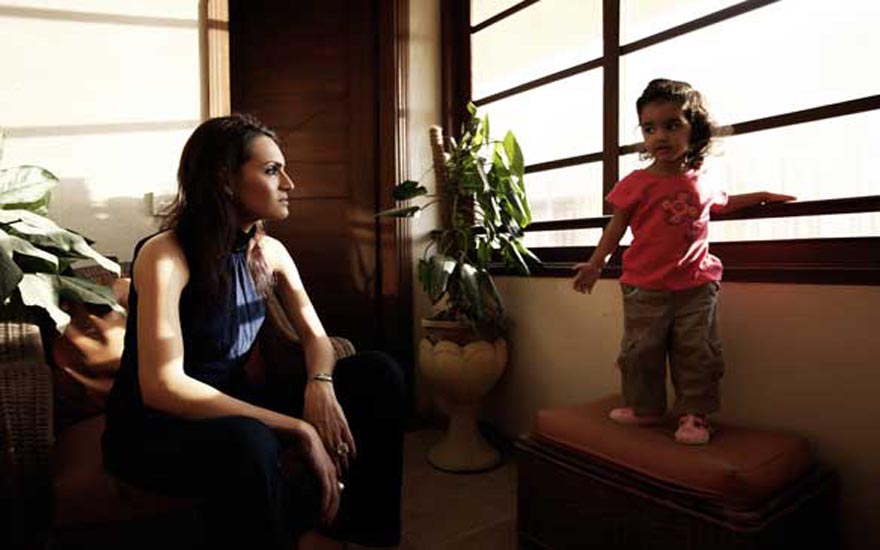 Q:  How do you balance a full-time career and with a family comprising kids?

A:  You need to know how to divide your time between work and family. At times, it can still get out of hand; for example, I was called in for a shoot a week before I was scheduled to go to New York for a show and I couldn’t refuse them. For five days, I was busy working for the shoot and then immediately after, I left for NY for another five days. And my husband interjected with “Excuse me! You really need to stop and do something, you know.” So sometimes the schedule can sort of slip out of your hands. But it is my family’s support network that really helps me get through my work regimen. For instance, just recently I had to go for a shoot in the morning and the same day I was scheduled for a recording in the afternoon and some other engagement in the evening. My kids were looked after by my mother and my husband. And even though I was in and out of the house that particular day, they were well settled.

Q:  There is a certain stigma attached to being a model. Also people view models as easy prey? How do you deal with this stereotpying?

A: In this industry, if you stay clean there is no one who can affect you. I would never expose myself in a manner that is questionable in the public eye. For example, if I am doing a shoot for a billboard, I am very particular that I do not wear anything too revealing. And I have not faced censure so far. Maybe its because of my personality: I come across as an intimidating person. People think I’m not very approachable, so it keeps them at bay. [Fortunately] my family and I don’t move in circles that would look at me and my career with a critical eye.

Q:  Has the situation changed for the better?

A: Well, society has become a little more liberal — but in a small way. However, with Talibanisation rampant in our country, I think a large part of society will always be chauvinistic.

Q:  How do you deal with all the attention and adulation? Has it given you a sense of power over your fans?
A: I think it has given me an added self-confidence. But I would never use it to exploit anyone. I think I have acquired enough of a name to demand respect.

Q:  Has your career enriched your personal life in anyway?

A: Patience is running low, in both men and women, in these taxing times. Any woman who just stays at home handling maids and housework will go crazy; a career will help. If you don’t have something to call your own, you will just end up biting your husband’s head off and vice versa.

Q: To what extent are you involved in the ‘Our Country, Our People’ movement?

A: I’m helping out with ‘Our Country, Our People,’ a movement launched by Atiqa Odho to address not just women’s issues but civic problems as well. I am a willing spokeswoman for them.  I believe that we are faces that people recognise because they keep seeing us on television again and again, and they might just listen to us. However, at the moment the movement is still at a very preliminary stage and we don’t know where it will lead to or what the people’s response might be.

Q:  Your role model, a woman you look up to?

A: I derive inspiration from the women around me: my khala Tina Sani and my phuppi Tabinda Chinoy. Both are women I look up to. My phuppi has always been so classy. She is impeccably dressed and she carries herself so well. As far as my khala is concerned, I can discuss anything with her, from raising kids to money matters and how not to forget to pamper myself.

Q:  Where do you see yourself headed in a few year’s time?
A: I see myself still in this field. I also have an offer to open up a cosmetics clinic, which I am seriously considering.