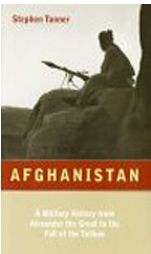 Who would not be attracted to a book that promised to relay the military history of Afghanistan ‘from Alexander the Great to the fall of the Taliban’? For the lay reader, the book offers an easy run through history and makes for an enjoyable read in many places. However, Stephen Tanner is not content with only recounting the armed conflicts the Afghans have had, either among themselves or with outside forces, over more than two thousand years. His book titled simply ‘Afghanistan,’states that the principal cause of Afghanistan’s backwardness lies its failure to emulate Switzerland, a country which transformed itself from a warlike nation into an army of skilled workers. Like the title of the book, however, Tanner’s thesis is much too bare to explain Afghanistan’s complicated history. Further, he describes Afghanistan’s conquest by the “wealthiest nation in history” as an unprecedented blessing, and declares that Fukuyama’s ‘end of history’ theory “has succumbed to the prescience of Samuel P. Huntington’s 1993 essay, ‘The Clash of Civilisations’”.

Such opinions that do not touch upon the socio-political history of a people, cannot claim to raise a writer’s stock as a historian — especially if no questions about the rights and wrongs of war are addressed.

Tanner begins by reminding the reader that “when American B-52s went into action on either side of the Hindu Kush in the fall of 2001, the military history of Afghanistan came full-circle.” That is, the conquest of Afghanistan by Alexander 2,300 years earlier, had begun to be replayed. Between the two points in time, the people of Afghanistan paid heavily for having their homeland at the crossroad of empires.

There is a reasonably well-condensed account of Alexander’s rise; his victorious march through Mesopotamia and Persia; the superiority of the Macedonian army’s battle technique; Alexander’s personal courage in combat; his suspicious nature that brought doom to close associates; and the suppression of his successors by new challengers: the Mauriyas, the Kushans, the Mongols, and the Turks. This is followed by a narration of battles among Afghan tribes and the emergence of Afghanistan as a state. The British expeditions to subdue the Afghans, the costly retreat from Jalalabad and what is titled as the ‘Victorian vengeance’ are described in gory detail. The people in our part of the world will perhaps be more interested, however, in the account of the Soviet military operations, the success of the mujahideen, the rise of the Taliban, and how the US further developed the technology for fighting wars without risking the life of its soldiers. Much of this part needs to be read, not only in the context of the recent past, but also as a guide to future prospects.

Here and there, bits of little-known information creep into the narrative. For instance, years before the September 2001 incidents, US investigators had uncovered a plan to crash a hijacked plane into CIA headquarters. A critical moment came in 1989 by which time “the original architects of Pakistan’s war strategy, President Zia and ISI chief Akhtar, had been assassinated. Yousuf, who had been head of the ISI branch that directed mujahideen field operations and weapons supply and training, had retired after being passed over for promotion. Under the new head of ISI, Hamid Gul, the CIA finally won its long struggle to control the arms flow to particular commanders in the field, “a prerogative that Zia and Akhtar, both devout Muslims, had jealously guarded.” One may pause here to question how their status as “devout Muslims” should have affected arms trafficking. While the war against Afghanistan was still going on, we are told that “hawks were clamouring to expand the war by next attacking Iraq…Clinton’s former advisor Dick Morris was prominent among those advocating that the US repeat its new formula of warfare by using Shiites in the south and Kurds in the north of Iraq as proxy troops in the next round.”

However, Tanner is not always careful to check his sources. He is quite wrong in his reference to the Holy Prophet’s (pbuh) death and his legacy: “In 632, the Prophet Mohammed ascended to heaven from Jerusalem, leaving behind a fanatical army of horsemen to spread his message.” He asserts that Zia-ul-Haq was assassinated. He apparently accepts the Northern Alliance’s report about “a stream of Pakistani aircrafts flying into Kunduz’s airfield at night, taking their nationals to safety.” In addition a story which lays the blame on the Muslims for the Gujarat carnage has been accepted without any reservation.

The author is not only a raconteur of battles, he obviously likes war. For him it was “fortunate” that the Taliban did not exile bin Laden. That would have relegated “the American response to September 11 to the level of counterespionage or police work.” He also advises the US not to abandon Afghanistan in a hurry. It should also settle other flashpoints “that fuel Islamic militarism”- Palestine and Kashmir. Islamabad should be quite happy with his prescription on Kashmir: “Not only the United Nations but America should prioritise a resolution of the dispute. A plebiscite, combined with judicious consideration for each nation’s self-defence requirements, enforced by the intense focus of the world community, would be welcome to both sides and especially to the people of Kashmir.” So defence is the key consideration.

The only part of the book that can be taken seriously is the detailed analysis of the conflicts in Afghanistan. It would have been better if the author had restricted himself to this subject. However, even if one disagrees with his assessments, it is useful to understand the mindset that offers new challenges to weaker states and societies.