The change has been swift as well as melodramatic. Only a month ago, the nuclear rivals India and Pakistan were trading threats of war, vowing to obliterate each other. But the situation has suddenly been transformed, with their leaders now holding out the olive branch. The peace overtures signal a significant breakthrough in the relations between the two nations that had come perilously close to triggering a nuclear holocaust just a year ago.

Both sides now seem keen to mend their badly tattered relations. Diplomacy is back in business as both countries move to restore full diplomatic relations and agree to return to the negotiating table. But most analysts agree there is still a long way to go before a sustainable peace process can be assured and the longtime foes can learn to co-exist.

In yet another highly symbolic gesture, India has announced the resumption of bus links with Pakistan. The twice-weekly coach service between Delhi and Lahore was abruptly suspended 18 months ago after Islamic militants attacked the Indian parliament in Delhi. The bus service, which started in February 1999, has a significant symbolic value. Indian Prime Minister Atal Bihari Vajpayee travelled to Lahore by the inaugural coach for his historic meeting with Pakistan’s then Prime Minister, Nawaz Sharif. The two leaders signed the Lahore Declaration that could still provide the basis for a renewed peace process. “Symbolism in the subcontinent can sometimes mean business,” says Maleeha Lodhi, Pakistan’s former ambassador to Washington.

Given their deep-rooted mistrust of each other, the process is likely to be a slow diplomatic dance with the two governments circling one another warily, each making tentative offers. Pakistani officials maintain that at the moment efforts are aimed at de-escalation and restoration of the situation that existed prior to the military stand-off, rather than any great leap forward.

“The move is not expected to be taken in spectacular steps, it will be an incremental process,” maintains a senior Pakistani ministry official. India’s Foreign Minister, Yashwant Sinha, has also tried to curb soaring expectations by warning that the peace process would be a slow one. Pakistan’s cautious approach reflects its traditional suspicion of its much bigger and militarily powerful neighbour. It is still reluctant to open its airspace to Indian planes and remove all trade barriers. The government fears that lifting the overflight ban could provide India an opportunity to establish close trade links with, and consolidate its influence in, Afghanistan.

Pakistani officials are guardedly optimistic about the normalisation process leading to any substantive outcome. “This could prove to be another false start if India raises the size of the table, rather than picking up the thread from the previous talks,” said a senior foreign ministry official. 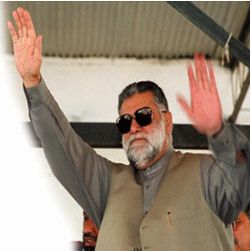 Pakistan’s cautious attitude also indicates that the government was not fully prepared for the dramatic change in the situation after Vajpayee unexpectedly extended the ‘hand of friendship.’ “Vajpayee’s call for peace and the scale of change caught us by surprise,” admits a senior Pakistani official. Pakistan sought to capitalise on the improved diplomatic atmosphere by announcing the resumption of full ambassadorial, transport and sporting links with India. But unnecessary delay in naming its new High Commissioner and lack of a clear policy direction has taken away the initiative from it.

Most analysts agree that it is much more in Pakistan’s interest to adopt a proactive approach. They believe that recent developments provide an opportunity for easing of the military tension that carried a heavy cost, in external as well as domestic political and economic terms. “For economic and political stability, it is extremely important for Pakistan to have peace with India,” asserts retired general, Talat Masood.

Kashmir remains the thorniest issue as the two countries move towards a rapprochement. The events of May and June last year indicate how quickly even skirmishes along the Line of Control could escalate into full-fledged conflagration with both countries appearing all too willing to engage in nuclear sabre-rattling. With one million troops facing each other and deployment of nuclear-capable missile batteries, the threat of a nuclear war was real. The military tension climbed down after the two countries, under pressure from the United States, pulled back troops from the forward position. Ironically, the leaders of both countries were quick to claim victory. President Musharraf boasted that Pakistan defeated India without going to war. Indian leaders were not far behind when they claimed they were close to a decisive victory.

There is no sign of flexibility on the Kashmir issue on either side. While India is eager to demonstrate that the Kashmir insurgency is totally Pakistani-sponsored, Pakistan appears equally adamant to keep the pressure on Delhi. Although the military government last year, under American pressure and threat of war, agreed to clamp down on militant groups and stop cross-border infiltration, the situation on the ground did not change. India’s refusal to engage in dialogue put Pakistan in a tight spot. India’s hardline position provided an opportunity to the military leader to resume support for the militants.

With India agreeing to resume peace talks, Pakistan now faces increasing pressure to completely stop cross-border infiltration and curb Islamic guerrilla groups. During his 90 minute one-to-one talk with President Musharraf, Richard Armitage sought a recommitment to imposing a total curb on cross-border infiltration. Some analysts partly credit US pressure on both countries for the current thaw. Washington has pushed President Musharraf to rein in Kashmiri militants, and Prime Minister Vajpayee to offer talks with Pakistan, giving Musharraf the political cover he needs to crack down further on the guerrillas. 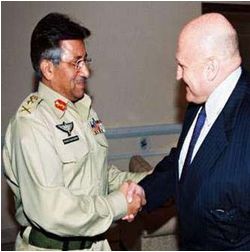 A serious international concern is that Pakistan’s inability to contain militancy may continue to be a significant obstacle to easing tension in the region. Armitage acknowledged there has been a decrease in infiltration and the level of violence in Kashmir had declined compared to past year. He added, however, that he was not fully satisfied with the situation. President Musharraf assured him that camps, if any, in Pakistani-administered Kashmir, would be removed.

Pakistan’s promise of a complete halt to the support for the Islamic militants does not seem credible at this stage. Pakistani military officials contend that a total turnaround in Pakistan’s policy may not be possible without some reciprocity from India, for example, reduction of troops and an end to human rights violations in the state. “We will loose all leverage if we just pull out our support to the Kashmiris without any show of flexibility by India,” said a senior Pakistani official. “In the absence of any light at the end of the Kashmiri tunnel, it would be hard for the government to sell any proposal for peace with India to its own people.” It is quite apparent that the military backed administration is not ready to put the Kashmir issue on the backburner.

Fears of a backlash from Islamic groups, which have emerged as a powerful political force following their stunning success in the last parliamentary elections, have also been a factor in Pakistan’s reluctance to abandon support to Kashmiri insurgency. “We don’t want them to turn their guns against us and ultimately take over state power,” said a senior military official.

Many Pakistani analysts dismiss this contention saying, continuing support for the militancy poses a greater threat to Pakistan’s own political stability. “Such a policy is fraught with disaster and has only helped in strengthening extremism in the country,” said Masood.

Finding a solution acceptable to both sides would be the most difficult task even in the best of circumstances as Kashmir is so deeply intertwined with India and Pakistan’s perceptions of national security and identity. Domestic political compulsions have made the issue more complex. What makes the prospect of peace more difficult is the past baggage of mistrust and suspicion the two nations continue to carry. “It is such an accident-prone relationship that any incident could derail the whole process,” says Maleeha Lodhi. In the existing situation, one cannot expect the two sides to begin negotiations on the more complex Kashmir issue and resolve it to both countries’ satisfaction. But there is an urgent need to achieve at least a “cold peace” in the meantime. It is important that Islamabad and Delhi continue the peace process while maintaining their position on the issue. We have seen such a situation in 1970 and the 1980s when the two countries improved trade relations and took other confidence-building measures, putting the Kashmir issue on the backburner.