“We will continue our struggle to liberate Kashmir”

Well-built with long hair, S. Yusuf Shah aka Syed Salahuddin is the chief of the largest Kashmiri militant group, the Hizbul Mujahideen, and head of an alliance of Kashmiri groups, the Muttahida Jihad Council. Hailing from Ameer Kadal village near Srinagar, in the early 1980s he was a cleric at a local mosque. In 1987, he contested elections for the State Assembly of Kashmir, but lost in polls which the Kashmiris dubbed as rigged. Subsequently trained in Gulbuddin Hikmatyar’s Hizb-e-Islami guerilla camps in Khost, he participated in the Afghan war against the Soviets until 1994. Later, he took over the leadership of the Hizbul Mujahideen, and now is its powerful ‘supreme commander.’ He is currently based in Azad Kashmir. 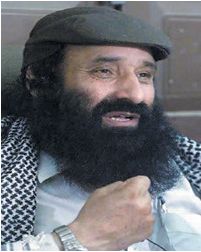 Q: How do you see the future of Kashmiri militancy in the changing scenario?

A: We believe our movement is getting closer and closer to its logical end. The sacrifices made by Kashmiris… the blood of thousands of innocents will not have been shed in vain. Now Vajpayee has been compelled to offer Pakistan friendship. He knows India cannot crush the Kashmiris in Indian-occupied Kashmir.

Q: But don’t you think that if the process of negotiations progresses well, the Kashmiri militants will inevitably be sidelined?

A: We know the shrewd Indians and their tricks. They talk of negotiations only to lessen the pressure they have been put under [in terms of] human and financial losses by the mujahideen in Kashmir, not out of sincerity. That is why we say we will continue our struggle to liberate Kashmir.

Q: Is there any truth in the increasingly widespread perception that the Kashmiri fighters are losing their support in Pakistan?

A: No, it is not true. The Pakistani government and President Pervez Musharraf will not end their moral and diplomatic support to us. They are sincere to the Kashmir cause. The mujahideen struggle serves as a defence line for Pakistan. God forbid, if the movement weakens, the war could be fought inside Pakistan due to the naked aggression of the Indians. So one should stop thinking that Pakistan can distance itself from the Kashmiri movement.

Q: Pakistan is a key ally in the US-led war on terror, and after 9/11 it has clearly become difficult for the militants to continue their operations. In such circumstances, don’t you think there will be a distancing between the Kashmiri mujahideen and Pakistan?

A: Lots of things have changed after the attacks on America. We have seen the fall of the Taliban regime in Afghanistan. We have witnessed the way Saddam Hussein’s rule in Iraq ended. But the relationship between Pakistan and the mujahideen is of a different nature. Ours is an indigenous movement, not a terrorist movement. It is a struggle for freedom. Pakistan has always extended [the Kashmir struggle] its moral and diplomatic support, and will continue to do so. But it has never helped us cross the LoC which we do not consider a border — Kashmir is our territory, our land.

With the blessings of Allah, the mujahideen are self-sufficient. We know how to make explosives. This is evident in the recent increasing attacks against Indian security forces in Kashmir.

A: The Muttahida Jihad Council (an alliance of Pakistan-based Kashmiri groups) has decided that the mujahideen will continue their struggle. Talks [between the two countries] and the mujahideen can take place simultaneously, as has happened in the past. Look at how Britain has dealt with both the Sinn Fein and the IRA in Ireland.

Q: Don’t you think Kashmiri fighters will attempt to stymie the peace process?

A: No. Not at all. We also want peace, but are familiar with India’s tactics. If India is willing to restore the confidence of the Kashmiri people, it can do so by announcing that Kashmir is a disputed territory and the issue should be resolved according to the wishes of the Kashmiris. As a gesture of goodwill, if India releases the thousands of innocent Kashmiris [in its custody] then we can talk of a ceasefire. India has to show its sincerity. But the Indians have always adopted delaying tactics.

Q: It is commonly believed that the changing situation has weakened the freedom movement. Even young Kashmiri militants seem to be disillusioned about the future…

A: Mujahids do not have a clear picture of global and regional politics, but they are influenced by international events. They also see Pakistan’s changed policy towards Afghanistan. However, they should not lose heart. Militancy will be strengthened by the grace of Allah.

I believe the movement will not be affected due to international events. It is a mass movement and a deep-rooted one. And that is why Kashmiris are able to counter Indian security forces despite the presence of 750,000 troops in Kashmir. Movements do have ups and downs. Sometime the intensity of attacks increases and sometime it decreases, but these tactics are strategic in nature. A mujahid cannot understand this. The responsible commanders have the knowledge. It is this movement that has forced Indians to come to the negotiating table. My message to the mujahideen is to be united and continue their jihad. Soon success will be theirs.