The fate of over 300 Iraqi nationals, many of whom fled to Pakistan after the 1990 Gulf war, remains uncertain. With the ouster of Saddam Hussein’s regime, the refugees — of which a sizeable number are based in Balochistan — are looking to return to Iraq and have appealed to the governments of Pakistan and the United States, as well as assorted international organisations, to help repatriate them as soon as possible. With the situation in Iraq as it stands, however, this may not happen any time soon.

Several hundred Iraqis have crossed into Pakistan over the last 12 years illegally, via Iran, in the hope of being accepted as refugees by the United Nations High Commission for Refugees (UNHCR), reportedly so that they could eventually find asylum in Europe or the United States. However, because of the increasingly stringent curbs on immigration, only a few of them have succeeded in this objective, with the majority of them having to live in Pakistan in the hope that they would make it to the west some day.

While the UNHCR granted some of the Iraqis refugee status, and a limited monthly stipend, the rest who are in a majority, have had to eke out a living by mustering their own resources.

Individuals granted refugee status by the UNHCR receive 2200 rupees each month, while a family gets between 3000 and 6000 rupees, depending on the numbers.

While the Iraqis’ intent to find their way to greener pastures in the west is commonly known, none of them admits that they fled their country to seek better prospects elsewhere or that they planned to apply for political asylum. They contend that they fled Iraq only to escape persecution by Saddam Hussein and his henchmen. Since most of them neither managed to make it to the west, nor earned refugee status, they have been in dire economic straits, often living off charity, and with two or more families sharing a single room.

Despite numerous appeals and protest demonstrations staged in front of the UNHCR Quetta office, however, the UNHCR officials have maintained a lukewarm attitude towards the refugees. An incident involving an Iraqi man — a father of six — who attempted to throw petrol bombs at the UN office two years ago, increased the miseries of the Iraqis manifold since, following the attack, they began to be viewed with suspicion by the UN authorities, who inevitably felt less sympathetically inclined towards them.

“What should I have done — my family had nothing to eat. I had only two options: either to see my already malnourished children die or to shake up the officials of this agency that supposedly works for humanity,” said 51-year-old Abdur Rahman Majid, the perpetrator of the attack. 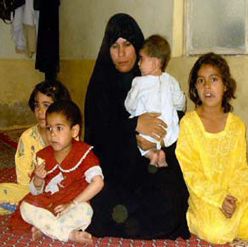 Majid says that he was so desperate, he even contemplated suicide. He claims he did not have any intention to harm anybody or the UN building, merely to draw their attention towards the Iraqis’ plight. Majid was arrested and handed over to the police after the incident, but was released on bail after a month.

Many others complain about the attitude of local UNHCR officials and claim they employ “delaying tactics” while processing the refugees’ cases. “The local officials have no human feelings, they do not even talk to us properly. When we go to the UNHCR office they drive us away like beggars or animals,” said Sajid Mahdi Abbass.

While some of the Iraqis have found employment as labourers, they say locals and Afghan (refugees) are preferred over them, due to the language barrier. A few of them opened small businesses, including hair-dressing salons, but maintain they do not earn enough even for basic necessities. Some years ago some Iraqi women were forced into prostitution. However, following a police crackdown, they left Quetta for an unknown destination.

Given their circumstances and bleak prospects for migration to western countries, the Iraqis are now setting their sights back home. They hope that under US control a new Iraq will emerge which will enjoy good relations with western countries, and in turn open new doors for them.

“We will remind President Bush of the pledges he made in his speeches before and during the war. He promised that Iraqi refugees would be allowed to come home once Saddam was gone. Now he should honour this commitment,” said Basim Karim Majid, a father of five, who lost his eyesight because he could not afford the required treatment.

The Iraqis are demanding that either the UNHCR organise a voluntary repatriation programme for them as it has done for the Afghan refugees, or that the government of Pakistan or the US arrange their early repatriation to their country.

“We do not have enough money to travel even up to the neighbouring town, but if the funds were provided, we would not stay here even a single minute longer — we’d head home,” says 48-year-old Abbass.

Recently, a number of Iraqi nationals gathered in Islamabad to seek an appointment with either Pervez Musharraf or Prime Minister Jamali to urge them to organise their early repatriation. However, security officials did not allow them to meet either.

“Twenty-five of us Iraqis from Islamabad, Lahore, Karachi and Quetta gathered to seek the attention of the Pakistani authorities, but we failed in our effort,” said Fawad Shahab Ahmad. He added that, apart from repatriation, the Iraqis also wanted to draw the authorities attention to 25 Iraqis who were languishing in a Rawalpindi prison for the last six years under the Foreigners Act. Two of them died of natural causes, and three of them had to be sent to a mental hospital.