Shrouded in black from head to toe, wielding bamboo sticks and vigilantly manning their posts around the clock, they are ready to die as “martyrs.” This is not mere posturing. Their determination, in fact, seems unshakeable. They have rigidly stuck to their demands and have vowed that “there will be no retreat.”

It has been more than two months since several hundred female students from the Jamia Hafsa, a women’s seminary, took over the only children’s library in Islamabad. Since then, the government and its various agencies have unsuccessfully tried every tactic to dislodge them.

The trouble began with the government-sanctioned demolition of certain mosques with several dozen more mosques and seminaries under threat as well. The central administration had swung into action after intelligence agencies reported that certain mosques were situated along routes used for VIP movement. Given the precarious security situation in the country, reports suggested that these points could be used to carry out terrorist attacks.

In the wake of these reports, the Capital Development Authority (CDA) carried out a detailed survey of mosques and madrassahs across Islamabad and found that 127 seminaries were being run in the capital. Of these, 77 were registered — 42 of them in the year 2006 alone — 31 were unregistered and 69 were deemed ‘unauthorised’. In addition, nearly 84 mosques were found to be built on illegally occupied land. The CDA then served evacuation notices to the heads of the relevant mosques. The Jamia Hafsa, which provides free Islamic education for some 6,500 female students, was also served such a notice. In response, the students of the Jamia Hafsa occupied the children’s library, which lies across from their madrassah.

The occupation of the children’s library is intended as a stark warning to the Musharraf government against “succumbing to western pressure” to streamline the country’s network of roughly 20,000 religious schools. Many of these seminaries are seen as nurseries where impressionable young minds are tutored in lessons of intolerance against religious minorities and the West. “We are justified in our actions because we are protecting our rights,” Uma Aymen, a 22-year-old seminary student told a local reporter. “Our Muslim government is behaving like this only to please America, and I want it to wake up now.”

“We will do whatever we have to for the protection of Islam,” said another student. “The government can bring in its weapons, but we will never give in.”

The takeover of the library building has caused major embarrassment and comes at a time when President Musharraf’s popularity is at its lowest ebb. Meanwhile, he is also under immense pressure from international allies to do more to rein in the Al-Qaeda and Taliban, who are allegedly using Pakistani soil to launch offensives against NATO troops in neighbouring Afghanistan.

In the early days of the crisis, President Musharraf dispatched a contingent of over 700 police personnel, including women officers, to free the besieged library building. But they had to withdraw in the wake of agency reports that Ghazi Abdul Rasheed and Maulana Abdul Aziz, two cleric brothers who head the adjacent Lal Masjid, had asked their students to lay down their lives if any force was used to evict their sisters-in-arms. It was also reported that the brothers had addressed the Friday congregation, urging the faithful to launch suicide attacks if the government went on the offensive.

The report submitted to the interior ministry suggests that the clerics would have welcomed a violent confrontation with government forces to add fuel to the mosque demolition controversy. In fact, the word is that they are setting up an anti-government force, and 150 activists hailing from banned sectarian outfits, especially the Jaish-e-Mohammad, were summoned to Islamabad recently. Yet another report revealed that several dozen militants from North and South Waziristan are sheltered in the Lal Masjid. They contend that any raid on the library or attempt to free it from the female students could trigger a violent clash that will have repercussions across the country. 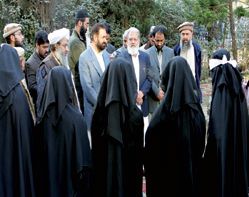 The Lal Masjid, which is also adjacent to the ISI headquarters in Islamabad, has always been considered a hotbed of militancy with links to the Taliban and Al-Qaeda. Its walls reverberate with slogans such as, ‘Jaan luta dain gai, Islami nizam lain gai’ (We will sacrifice our lives and will enforce the Islamic system); or ‘Jis ki zameen uss ka nizam, Allah ki zameen Allah ka nizam’ (Whoever’s Earth, his administration, Allah’s Earth, thus Allah’s administration).

Both Ghazi Abdul Rasheed and Maulana Abdul Aziz, who head this mosque and are well known for their fiery speeches, are the alleged brains behind the inflammatory religious decree issued in 2004 when the Pakistan army launched its operation in the tribal areas. The decree stated that any army personnel killed while fighting in South Waziristan should be denied a Muslim burial. This decree was signed by 500 clerics and scholars from across the country. Some reports also suggest that the Lal Masjid and madrassah served as a dumping ground for explosives, which were later used in an assassination attempt on President Musharraf.

Warrants have been issued for the arrest of the two brothers, but the government has been unable to apprehend them since they are said to be hiding inside the seminary. The madrassah is now guarded round the clock by masked students who can be seen standing on the roof of the Lal Masjid, monitoring the activities of anyone who comes near the building. Reportedly, nearly 500 seminary students have been assigned to patrol the area around Lal Masjid and Jamia Hafsa and to resist government troops.

To avoid a violent confrontation, the government sent several leading religious scholars, including four leaders of the Wafaqul Madaris al-Arabia (Maulana Saleemullah Khan, Justice (r) Mufti Taqi Usmani, Maulana Abdur Razzaq Iskandar and Maulana Sher Ali Shah) to persuade the two clerics to vacate the library building. But the brothers refused to comply and instead sought the visitors’ help to ensure enforcement of an Islamic system in the country. The visiting scholars later dubbed both the brothers as “lunatics.”

Later, Ejaz-ul-Haq, the federal minister for religous affairs, who enjoys cordial ties with the clerics, met them and literally touched their feet and asked them to pay heed to reason. He informed them that if they refused to vacate the property, the president had ordered stern action against them.

The clerics, however, remained defiant and insisted that the library would be vacated only when the government had reconstructed all the mosques it had destroyed, as well as withdrew the evacuation notices issued to 84 other mosques and seminaries. Once again, they reminded him that they were ready to lay down their lives to set a precedent for others to follow.

As a compromise, the government announced that it would reconstruct one of the demolished mosques and regularise about one acre of land that the Lal Masjid and Jamia Hafsa have illegally occupied since 2004. For their part, the only concession the clerics made was that its “women occupiers” would allow children who were members of the library to use the premises if they brought their membership cards along with them. Incidentally, they have changed the library’s name to the Islamic Children’s Library. They maintained that they would withdraw completely only when all their demands were met. Eventually the minister admitted that his negotiations with the clerics had proved completely fruitless. “This cannot go on indefinitely,” he said, accusing the clerics of using the young women as “human shields.” And according to Minister for Parliamentary Affairs Sher Afgan Niazi, many of the Jamia Hafsa students guarding the library are armed with Kalashnikovs.

As for the cleric brothers, they now refuse to enter into any dialogue with government representatives claiming that the authorities have been trying to “trick them.” In a detailed letter, Ghazi Abdul Rasheed wrote that the government had decided to rebuild one “shaheed mosque,” which was just one of their many demands. “Our demands are not just confined to the problem of Masjid Amir Hamza. It is also about the six mosques that were demolished before Masjid Amir Hamza. Those mosques should be rebuilt too.” He further stated that the demolition notices issued to 10 other mosques should be withdrawn. In addition, the list of 80 mosque structures that are deemed illegal should be destroyed.

He justified the occupation of the library saying that the students were well within their rights. “The government has pulled down seven mosques. Equal retribution would have been served if seven government buildings were brought down and demolished,” Ghazi said. “You think we are all alone, but this is not true. From every section of society we have received thousands of names, and if you attack us, a volcano will erupt in Islamabad. The government will be reduced to smithereens,” he warned.

For their part, the students action committee of the Jamia Hafsa has also sent a letter, with copies to President Pervez Musharraf, the corps commanders and heads of law enforcement agencies, stating that the 7,000 Hafsa students were willing to lay down their lives if their demands were not met. According to the letter, “The Pakistan Army has forgotten its motto of jihad,” and thus lost “credibility and dignity among the masses.” It asks President Musharraf to apologise to the nation and to God for the demolition of the mosques. It also blames the deteriorating law and order situation in Pakistan on the non-implementation of Islamic Shariah.

In the current stalemate, the government seems to have given up any attempts to evacuate the building recently occupied by the baton-wielding women in black. Meanwhile, the women have extended their demands — they even oppose women drivers — and have said that they will not abandon their protest until Shariah, or Islamic law, is imposed throughout Pakistan. As one student insists “That is the only way that this will end.”