Former Pakistan captain Imran Khan made an impassioned plea after Pakistan was eliminated early from the World Cup for the Pakistan Cricket Board (PCB) to be run in a democratic manner and according to its constitution.

He claimed that the practice of running the cricket set-up on an ad hoc basis since 1999 and giving one person complete power to do as he felt had destroyed the structure of the game in the country and eventually resulted in the team’s dismal World Cup performance.

Imran has a strong point. It is a fact that when Pakistan reached the final of the 1999 World Cup in England, cricket affairs were run by an elected body and chairman. Soon after the World Cup, former President Rafiq Tarar imposed ad hoc-ism in the board and suspended the elected bodies. Since then, President Pervez Musharraf, the chief patron of the sport, has allowed this system of governance to continue.

The result has been that Musharraf has appointed, in succession, three of his cronies, Lt General (Retd.) Tauqir Zia, Shaharyar Khan and Dr Nasim Ashraf, to head the ad hoc board. Twice in their tenures Pakistan has failed to progress beyond the first round of the last two World Cups — in 2003 and 2007.

More importantly, Pakistan recorded its lowest test scores, 57 and 53, against Australia in Sharjah in 2002 during this period — and the drama continues.

Clearly there are lessons to be learnt from the debacle of the current World Cup. Perhaps most important among these is that cricket should be left to those who know something about it — professionals, not government officials.

Perhaps no one on the cricket board or team realises the great emotional attachment Pakistanis have with the sport and the effect the team’s performance or the decisions of the board have on the nation’s mood and psyche.

Tauqir Zia and Shaharyar Khan failed to create any impact on the board or bring about positive changes in the cricket system. The last chairman of the board, Dr Nasim Ashraf, was seen as arrogant, and the manner in which he handled (read mishandled) the Shoaib Akhtar and Mohammad Asif doping issue made it clear that he had no inkling of how the international cricket fraternity works. Another case in point was the manner in which he conceded ground to India and agreed to back the nomination of Indian board president, Sharad Pawar, for the ICC presidentship without getting any concessions for Pakistan in the hosting rights of the 2011 World Cup.

But the buck doesn’t stop there. The captain also exercised an inordinate amount of influence on the team, which often worked to its detriment. This was evident when last August under Inzamam-ul-Haq’s directives, the team refused to listen to anyone and forfeited the test match to England at The Oval. But the indiscipline among the ranks of Pakistani cricketers is now legion. And this in large part owes to the tendency of successive chairmen of the PCB to get too intimate with the players, thereby not commanding their respect or having the authority to reprimand them when required. No other chairmen of cricket boards in the world get as close to the players as our cricket chiefs do. 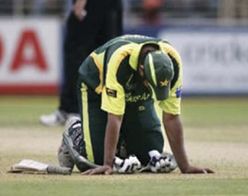 After all his talk of how he was going to put Pakistan cricket on the right track and how there would be no compromise on transparency and discipline, Ashraf repeated the mistakes of his predecessors. He made appointments to the board without following a due process of selection, and he routinely wilted under pressure from Inzamam and other players.

It was such an outfit and cricketing structure that Bob Woolmer — Shaharyar’s choice of coach — had to contend with. It is small wonder then that in the three years of his tenure as coach, Woolmer did not achieve much. Pakistan’s test record against the three top teams, Australia, South Africa and England, under Woolmer was one victory and eight losses in the 10 tests played.

Pakistan fared poorly in the World Cup because they had just not planned properly for the big tournament. The selections were all wrong, with Inzamam refusing to listen to reason.

One example of the lopsided selection was that Pakistan decided to pick leg-spinner Danish Kaneria for the World Cup just one month after having ditched him for their one-day series in South Africa.

The fact is, neither our board nor the selectors or the team management appear to have vision or acumen of how cricket today needs to be handled professionally.

Given the unprofessionalism and lack of planning that marked our preparations for the mega event, compounded by Shoaib Akhtar and Mohammad Asif’s unavailability for the tournament, Pakistan’s loss to the West Indies in the opening match should have come as no surprise. While the defeat to minnows Ireland was unexpected, it graphically indicated the depths to which Pakistan cricket has plummeted.

It also highlighted an urgent need to bring into the board professional, educated technocrats who not only understand the game but the requirements of modern-day human resources management. And finally, there should be accountability of all those involved in the game. In the absence of accountability, the rot that has set in will continue to fester.