“By legitimising takeovers, the judges have abdicated their role to defend the constitution” 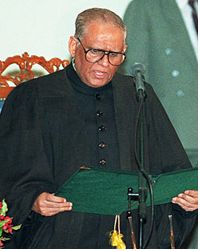 Q: How do you view the charges filed against the chief justice?

A: It would be unfair to comment on this issue. It is for the Supreme Judicial Council (SJC) to decide. All I can say is that in the 60-year history of the judiciary, this is the first time that such a reference has been filed against the chief justice of Pakistan.

Q: Questions are being raised about the manner in which he was removed.

A: The manner in which the proceedings to remove him were initiated is highly objectionable. The way he was called by the president and the way the charges were read out to him are not within the parameters of the reference proceedings. Similarly, the way he was treated afterwards, that too is not in accordance with the norms of decency. Until such time as the SJC gives the recommendation for his removal to the president, he continues to remain the chief justice.

Likewise, the way they sealed off his residence, prevented him from meeting people, disallowed his children from going to school and disconnected his phone and TV cable — all this was uncalled for and not in accordance with the law and the constitution.

Perhaps they thought that by doing this they could force him to resign from the post of chief justice.

Q: What was the motive behind the government’s decision to remove him?

A: There is a general perception that the government was not happy with the decisions he made in the Steel Mill case or the case of the missing persons. This may be one of the reasons why they felt that he must be removed.

However, the allegations, which are now filed in the reference against the chief justice, must have been in the knowledge of the government for quite some time. If they felt that he was guilty of misconduct, they should have taken action against him immediately.

As we all know, this is an election year and lots of legal issues are to be debated before the elections. This could have been one of the reasons too. However, one should not forget that he is one of the judges who took an oath under the PCO. Normally speaking, the government should not have had any reservations about him.

Q: You have also served as the chief justice of the Supreme Court. What kind of pressures does a chief justice usually face from a sitting government?

Q: Would you say that there is a judical crisis in the country?

A: There is a judicial crisis in the country in the sense that a reference has been filed against the chief justice of Pakistan. It is totally unprecedented. But this is the time for the judiciary to assert itself. They had a chance earlier on as well when the government asked the judges to take oath under the PCO. They should have stood up to the government then and refused to accept the order. However, the judiciary has been given yet another chance to assert itself at a time when people had lost confidence in this institution because of its past track record.

With the decisions taken in the cases of the Pakistan Steel Mill and the missing persons respectively, hope for an assertive judiciary has been revived in the hearts of the masses. If the judiciary continues to take decisions like these, which are strictly in accordance with the law and the constitution, and are uninfluenced by any consideration, I’m sure that it can establish its credentials in the eyes of the common man.

Q: But do you see this happening? The chief justice has questioned the credibility of some members of the SJC, but none of them have stepped down.

A: It is difficult to change the members of the council as per the constitution. No one can do that. However, if an objection is raised against any member, it is for that member to decide whether to continue or not.

Q: What made you revolt against a fellow judge, Justice Sajjad Ali Shah? This was one of the times when the position of the judiciary was weakened.

Q: Apparently this decision exposed the infighting among the members of the judiciary and thus undermined its role. Why did you take up a case against one of your own, a case that had been pending for two years?

A: It was not possible to not take up the case. We had to lay down the procedure and what followed was natural. The case was pending in the Peshawar High Court and he (Justice Sajjad Ali Shah) was not allowing it to be heard. I agree that this was an unfortunate event and that it affected the credibility of the judiciary adversely. But I do not agree that it should not have been taken. It was a constitutional question, and we had to decide it in accordance with the constitution.

Q: But for the sake of saving the institution you could have decided not to take up a case against your own chief justice.

A: This was debated. But the bench decided to remove him and to appoint the senior-most judge in his place as the chief justice.

Q: Why has the judiciary failed to rise to the expectations of the people?

Q: You were also the chief justice of Pakistan. Why didn’t you take a stand against the military takeover?

A: Well, when the Zafar Ali Shah case was filed, the government came out with this new oath which we refused to accept, and they retired us before we could hear that case.

Q: How can the people’s confidence in the judiciary be restored?

A: Unless the judiciary asserts itself and counters the moves of the government, they cannot restore their image as defenders of the constitution. The main job of a superior court judge is to guard against the transgressions of government functionaries or those actions of the government that deny people the fundamental rights guaranteed to them under the constitution. Till the Supreme Court fails to perform this function, it cannot restore its image among the general public.