In many ways, we live as prisoners of history. And this collective bondage also interferes with our individual lives. Take the case of the Partition of August 1947 and how its dark shadows still hold sway over the entire subcontinent. There is always that ‘what-if’ riddle in the study of history. The evolution of the freedom struggle in British India and its eventual outcome can initiate some very interesting assumptions about possible alternatives to what actually happened. There is always this anguished reminder of mass killings across the newly drawn frontiers. 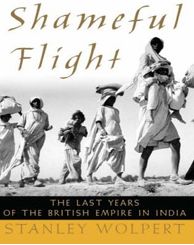 In this respect, there have been intense debates about the role of individual leaders, such as Jinnah, Gandhi and Nehru, at critical moments and how their decisions set the direction of momentous events. But we now have considerable evidence to suggest that the one man who bungled the process and was responsible for some of the immediate disasters, in human terms, of Partition was Admiral Louis Francis Albert Victor Nicholas ‘Dickie’ Mountbatten, the last viceroy of British India.

In his compelling book, Shameful Flight: The Last Years of the British Empire in India, Stanley Wolpert has discovered some new material and has sifted through available archives to paint a fresh portrait of an illustrious military leader who was reputed for his charm. But what we have here is a representation of almost absolute wickedness and incompetence.

Wolpert, it should be appreciated, is eminently qualified to revisit the Partition because of his life-long interest in this region of sorrow. We can sense a surge of passion in this 79-year-old historian who has already documented the lives of the top leaders of the freedom movement. What he uncovers, as he investigated the role and performance of Mountbatten, was apparently so horrifying that we find him becoming rather emotional in his narration.

At the heart of this account is the incredible human cost of Britain ‘s hasty withdrawal from India, as designed by Mountbatten. In the wake of this “shameful flight,” as Wolpert describes it, “a tsunami of more than 10 million desperate refugees swept over North India: Hindus and Sikhs rushed to leave ancestral homes in newly created Pakistan, Muslims fled in panic out of India.” Estimates vary as to the number of people who were murdered or who died in this upheaval. According to Wolpert, “a conservative statistic is 200,000; a more realistic total, at least one million.”

One reason why Wolpert seems so sensitive about the manner in which the partition of India was handled by Mountbatten is that he believes that “the tragedy of Partition and its more than half century legacy of hatred, fear, and continued conflict — capped by the potential for nuclear war over South Asia — might well have been avoided, or at least mitigated, but for the arrogance of a handful of British and Indian leaders.” Mountbatten, of course, played the leading role.

Incidentally, Mountbatten himself was known to have been remorseful about how he had handled his assignment. Wolpert has referred, in his introduction, to an account by the BBC’s John Osman of a dinner he had had with the 65-year-old ex-viceroy shortly after the 1965 Indo-Pakistan war. During that conversation, Mountbatten admitted that he had “got things wrong.” In an e-mail that was published in London’s Spectator of September 4, 2004, John Osman recalled: “Mountbatten was not to be consoled. To this day his own judgement on how he had performed in India rings in my ears and in my memory. As one who dislikes the tasteless use in writing of …. ‘vulgar slang’ … I shall permit myself an exception this time because it is the only honest way of reporting accurately what the last viceroy of India thought about the way he had done his job: ‘I fucked it up.’”

What does one do with this belated repentance? There is this perennial debate about how far individuals who find themselves at the helm of affairs in times of deep crises, can define the course of events in the presence of the powerful forces of history. After all, the independence of India was eventually inevitable though it was surely hastened by the Second World War. Indeed, the first chapter of Wolpert’s book begins with the fall of Singapore and concludes with the failure of Cripps’s mission — the events of February-April 1942. However, when Britain decided to divest itself of what was the crown jewel of its empire, the task of doing it in a planned manner was assigned to King George VI’s favourite cousin.

We know that the British government wanted to leave India by 1948 but Mountbatten was in a hurry and cut the time by half to mid-August 1947. In his impatience, he committed the blunder of partitioning the Punjab and Bengal in an arbitrary and conspiratorial manner. He kept the maps secret, until it was opportune for him to make the announcement. These lines were drawn by Sir Cyril Radcliffe, a barrister who had never set foot on Indian soil before 1947. Besides, he was told to accomplish his work in a month — a job that should have taken at least a year. Radcliffe left India hurriedly because he was so afraid of what he had done. He worried that Sikhs, Hindus or Muslims would kill him.

Wolpert sees this as Mountbatten’s gravest mistake, one that would unleash a surge of violence that could not be controlled. He says that had the governors of Punjab and Bengal known about the way the two provinces were being partitioned, “they could have, with their early knowledge, saved countless lives by dispatching troops and trains to what would soon become the lines of fire and blood.”

This, then, is a very disturbing book. About 60 years after the partition, we are still unable to come to terms with that trauma. Wolpert has also recorded Mountbatten’s villainous role in the Kashmir dispute. The first Indo-Pakistan war over Kashmir from October 1947 to July 1948 constitutes the tenth and last chapter of the Oxford University Press book.

It is significant that Wolpert has dedicated this book “To the memory of the million defenseless Hindu, Muslim, and Sikh victims of British India’s Partition.” He confesses to having pondered the question of the tragedy of Partition for half a decade, though he had dealt with aspects of it in many of his books. “After half a century of studying and teaching Indian history and writing 20 books on the subcontinent, I finally got an opportunity to reflect on one of the most momentous events in history,” he said in an interview late in 2006. In this interview, he saw parallels between the aftermath of 9/11 and what happened in India in 1947. Wolpert noted “the same kind of madness, the same kind of arrogance in going to war in Iraq.” In this case, obviously, so much of madness and arrogance resided in decisions made by Mountbatten. This observation does lend a sense of urgency to the book. We are still living with the aftermath of that critical period in our history as the world must contend with the folly of the war in Iraq.

Wolpert’s account of the most crucial period in his story, from June to August 1947, provides a true insight into the making of the tragedy that attended Partition. It begins with Nehru’s acceptance of the Partition plan in a broadcast on the night of June 3, in which he said that “the sands of time run out and decisions cannot await the normal course of events.” Jinnah also broadcast nationwide that evening in which he said that “it is clear the plan does not meet in some important respects our point of view.”

At a pace that would be appropriate for a detective story, Wolpert summarises the salient features of that time. We learn that mistrust between Congress and League leaders was so intense that “Nehru and Liaquat almost came to blows in the council chamber of the interim government over Nehru’s insistence on appointing his sister, Madame Pandit, to serve as India’s ambassador to Russia.”

Wolpert has made good use of new material that he got, including private correspondence and de-classified official documents. There is this letter that Bengal’s secretary, John Dowson Tyson, sent to his home from Calcutta on July 5: “Mountbatten is a hustler; ever since he came out he has pursued shock tactics… He made his plan (and) soon after that the blitz began. And since the time when he launched his blitz he has given no one any rest — the Indian leaders least of all …The India of ‘after-August 15th’ will not be the kind of country I should want to live in.”

We should be grateful to Wolpert for allowing us to revisit Partition and seriously reflect on what we can learn from those derelictions to create a new South Asia of peace and well-being for its teeming millions. It may even be a controversial book, particularly with reference to the decline and fall of the British Raj. The end of a colonial era, it would appear, is bound to be messy. In the final analysis, however, we need to understand our freedom movement and put specific events in a broader historical perspective to be able to resolve our present contradictions at the domestic and regional level.