It started with pulling the plug on access to information for one man and snowballed into an attack on the press itself. Soon after his meeting with President Musharraf at the Army House, Chief Justice Iftikhar Chaudhry was driven home, although he intended to drive to the Supreme Court. Driving in a car sans the official flag, he entered a home devoid of newspapers and the Internet. According to Air Marshal (Retd.) Asghar Khan, “The Chief Justice’s telephone lines, TV and Internet had been disconnected, his personal mobile phone blocked and newspaper delivery stopped.” 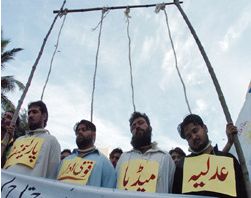 As the story unfolded, a sense of dÃ©jÃ  vu prevailed. For most Pakistanis, this was a grim reminder of the Zia era. Of all the sentries posted by the constitution of a free country to stand guard over its freedoms, the most vigilant is the media. An outrageous attempt to gag the media was witnessed by Pakistani citizens on live television during the attack.

About two dozen storm troopers from the Punjab police were unleashed to attack and ransack the offices of Geo TV on March 16, in an effort to stop the channel from airing live pictures of police brutality against protesting lawyers. They smashed the windows of the office, leaving rooms covered in a layer of broken glass.

Since the attack, apologies have been made and official circles have belatedly “condemned the attack.” Federal Minister for Railways and former Information Minister Shaikh Rashid said while talking to Geo, “Our media is more advanced than we are. Our people are not ready to view such live footage.”

Rana Akbar Hayat is a judicial officer. According to Section 19 of the ATA, members of the JIT should belong to investigation and intelligence agencies and not be persons holding judicial or administrative office.

Section 19 clearly states, “All offences under this Ordinance except the offences in respect of which the investigation has already been completed and final report under Section 173 of the Code submitted in the Court shall be investigated by a Joint Investigation Team, which shall comprise a police officer not below the rank of an inspector and an officer of any investigation agency, including an intelligence agency, whom the federal government, or as the case may be, the provincial government, may nominate for the purpose. The Joint Investigation Team shall complete the investigation in respect of a case triable by an Anti-Terrorism Court within seven working days and forward directly to the Anti-Terrorism Court, a report under Section 173 of the Code.”

Consequently, Rana Akbar Hayat cannot be a member of the JIT. Therefore, the investigation conducted by the JIT will be illegal and the report can be challenged in a court of law.

The media faces further restrictions on its reporting. The regulatory authority, Pakistan Electronic Media Regulatory Authority (PEMRA), had banned the show Aaj Kamran Khan Kay Sath only to lift the ban a week later. Aaj TV has also had their broadcasts suspended in recent days due to its coverage of the judicial crisis.

There have been three instances of press intimidation with reference to the current crisis. While the case of Geo TV is well known, it is not so well known that ARY and Aaj TV were subjected to verbal intimidation by PEMRA. Both channels showed live coverage of the lawyers’ protest in Lahore, with the PPPP’s Latif Khosa being beaten by the police and bleeding from the head. These images were caught on camera live by both stations and broadcast. PEMRA verbally asked the management of these channels to pull the images off the air. However, both channels repeated them with the result that PEMRA suspended the channels’ transmission.

The second blow was delivered in writing to Geo by PEMRA, declaring that the show Aaj Kamran Khan Kay Sath be pulled off as it was in “contempt of court commenting on an issue that is sub judice.” The episode that prompted the action was a discussion of the judicial crisis with former law ministers and constitutional and legal experts.

Media analyst and country director of Internews, Adnan Rehmat, informs, “The only legal advisory that the media got was from the Supreme Judicial Council, who declared that the media would not be allowed to broadcast the proceedings of the case. Any information about the proceedings of the case will be restricted to the official press release. There is no bar, legally speaking, on discussing the broader spectrum in the context of Pakistan.”

On the Aaj Kamran Khan Kay Sath show, there was a candid discussion among former law ministers and constitutional experts over the role of various pillars and departments of the state, including the army. “There is nothing sub judice about this, and under Article 19 of the constitution, the media is free to report on issues of public concern and interest,” remarked Adnan. It is important to point out that after Aaj Kamran Khan Kay Sath went on air, readers also saw a press release issued by the Inter Services Public Relations (ISPR) eulogising the great service that the Pakistan Army had rendered to the nation over the years and declaring that the army should not be criticised.

The third instance of media intimidation from PEMRA came when two days after the Geo attack, ace Aaj TV anchor Talat Hussain got together prominent anchors of all stations to discuss the issue of media freedom in the country. The anchors were quite candid about the press advice that they’ve received over the years. The anchors declared that they have been specifically instructed “not to discuss the army and its role at all.” Geo’s Hamid Mir declared that he has been advised “to preferably gloss over the CJ issue or tone it down, otherwise advertisements of the Jang group would be cut.” Hamid Mir declared during the show that if he did not get justice, he would leave a country where the Chief Justice doesn’t get justice and would fight his case from outside the country. After the show, another verbal directive from PEMRA was issued to Aaj TV. The directives are mostly verbal because, according to Adnan Rehmat, “The government does not leave a paper trail.”

A petition was also admitted in the Lahore High Court by an individual requesting that “until this judicial crisis is over, all private TV and radio channels be stopped.” PEMRA is also one of the plaintiffs in this petition.

PEMRA is a strange regulatory body. According to Adnan Rehmat, “It focuses on Don’ts more than it focuses on Dos. This is not surprising as it is headed by a retired police officer who has spent all his life on Don’ts rather than Dos.” Unlike other regulatory bodies in the country, PEMRA only regulates the private sector. It has a board of 13 members, with no representation of the private television or radio sector. According to Adnan Rehmat, “There is a dichotomy. The president can come on air and talk about the chief justice, but when the same TV channel, on the same show, with the same anchor conducts a discussion on broad legal and political contours of the issue, PEMRA regards that as sub judice.”

On the subject of media freedom that the present government declares it has ‘given’ to the media, I.A. Rehman, director Human Rights Commission of Pakistan, maintains, “There is freedom of speech, but no freedom to hear and understand.”

The government claims that it has “allowed” a lot of channels and FM radio stations to function, but this is not proof enough that it is comfortable with freedom of expression.

For the general public, the attack on Geo was a glaring example of press intimidation. However, for members of the media, the only thing new about this was that the attack on press freedom was caught on camera; usually it happens behind closed doors.

The present government’s claims of media freedom are deceptive. The only ‘permission’ that the current regime has given is to allow the setting up of private channels. But even if it had not, there are multiple sources of independent information that citizens can access. Even a citizen living in a heavily censored and regulated society, such as China, where there are 30,000 Internet police and where Google’s keywords are blocked, can get the information he seeks.

In the present communication age, if a television station is blocked, there is radio. If radio is blocked, there is the Internet. If one site is blocked, another one opens. If the Internet goes down, there are short messaging services. These opportunities allowed private radio stations, like Islamabad-based Power 99, to broadcast live protests in Islamabad when Chief Justice Iftikhar Chaudhry was being brought to the court, through a radio recorder mobile phone.

This opportunity allows even self-exiled Senators like Balochistan’s Sanaullah Baloch to maintain websites giving out factual information on the Balochistan situation after they and their families were hounded out and forced to live in exile. It allows Pakistani citizens to voice their opinion on blogs and get the word out.

It allows media and other citizens to connect to a global audience and generate international pressure. It was no coincidence that Hamid Mir switched to the English language while describing the events that took place at the Geo office as he stood outside it. Governments would do well to remember this before they attempt to silence the media.