Mohsin Hamid’s first novel, Moth Smoke, caused something of a stir. It mercilessly took apart the warped life of an urban elite under the influence and, through its two central characters, explored the often painful realities of class and power in Pakistan. With the perspicacity of an insider and the detachment of an outsider, Moth Smoke laid bare a complex Pakistani elite searching for its identity behind a seductive cocktail of drugs, alcohol, trans-national money and class privilege. 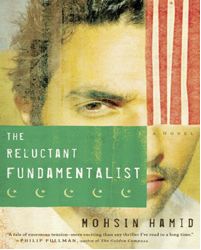 Amidst the growing army of South Asian authors — primarily of Indian extraction — speaking to an increasingly curious western audience, Hamid distinguished himself by his spare prose and instinctive feel for urban Pakistan. It was just possible that he would go some way towards rectifying the perennial shortage of internationally-known Pakistani authors writing on Pakistan. But, for all his talent as a chronicler of the Pakistani elite experience, Hamid himself admitted in a Newsline interview last October that The Reluctant Fundamentalist is as much about America as it is about Pakistan.

This is not the only difference between Hamid’s first and second books. Gone are the complex characters playing off one another in constant tension. The reluctant fundamentalist in the author’s second book — who goes by the name of Changez — has the book to himself. His is a monologue, in many ways as claustrophobic as the life behind the walled compounds of the elite depicted in Moth Smoke.

Changez’s monologue is directed towards a stranger — an American — whom he encounters in a Lahori cafÃ©. They strike up a ‘conversation’ and Changez feels a sudden urge to share with this stranger his entire life story. The reader is offered no introduction and Hamid dispenses with a narrator: we hear only the sound of Changez’s voice from the first line of the book.

This narrative move leaves us free to give our full attention to the plot. Changez comes from a relatively well-off, if not spectacularly rich, Lahori family. He does well in school and earns himself a scholarship to study at Princeton, which marks the beginning of a love affair with the United States. He is seduced by the dynamism and freedom of his newly adopted nation. He breathes in the veneer of a land of opportunity. He even becomes popular with his fellow students, who admire his old-world restraint and focused work ethic. Not surprisingly, his grades are impeccable.

His strong academic potential means he is picked up by a management consultant firm Underwood Samson. He is instantly given a golden ticket into the world of the New York financial elite and performs exceptionally well. Underwood Samson’s motto — “focus on the fundamentals” — seems to suit this particular hard-working immigrant.

Alongside his business interests, Changez develops something of a love life. At Princeton, he meets the charming and mysterious Erica, a product of an elite, white, east coast family. She, too, is drawn to his old-world charm, and he carefully cultivates what appears to be the beginnings of a romantic relationship. But the story is complicated by her history: Erica’s first boyfriend and childhood love, Chris, died only a few years before. The memory of his death haunts her. Despite Changez’s attempts to unravel the emotional knots tied around her, she eventually succumbs to her fantasies and her pathologies.

At roughly the same time, Changez begins to question his own career path. His American Dream is turning sour; the veneer of high achievement has started to wear off. When the Twin Towers fall, he finds that his geo-political conscience has been stirred. He can no longer watch as America turns into a patriotic bubble, nor does he feel comfortable as revenge is meted out to Afghanistan, a country Changez feels has “a kinship to mine.” America’s inequalities — easily ignored from the glass skyscraper in which he works — slowly become all too apparent.

To use an allusion far too apt for it to have been a coincidence, the “fundamentals” of Underwood Samson slowly transform themselves into Changez’s reluctant fundamentalism. American capitalism — which originally lured the protagonist from his native Pakistan — ultimately pushes him back. He returns to his family and begins a teaching career in Lahore, eventually finding himself unwittingly celebrated and vilified as an anti-American spokesperson.

It is with considerable skill that Hamid avoids turning the neat transformation of his character into a trite metaphor or a predictable trope. The title of the book announces the trajectory of the novel but there is something compelling in the author’s spare and clear prose. We are given a John Le CarrÃ©-esque thriller wrapped up in a claustrophobic and personal geo-political cloak.

Hamid has also taken on some big themes. Tradition, nationalism, globalisation, capitalism, Islam, the abuse of history — all are placed in the dock, either explicitly or examined through Changez’s monologue. Here again Hamid shows sensitivity and, by doing away with a narrator, allows his central character to walk along the fractures in East-West relations in a post-9/11 world. America is no longer as unimpeachable as it once appeared; nor are bearded and reluctant fundamentalists as easy to caricature as the West would have us believe.

But, if the personal character of Changez’s monologue gives the narrative unity, it simultaneously flattens out the book’s allegories and insights. The dichotomies are too neat; the tensions too sharp; the voice too loud. It is surely significant that we never hear the anonymous American speak. This is not a dialogue between believer and unbeliever; it is a dialogue between Changez and himself.

This feels altogether too easy. Hamid is right to focus our attention on the self-doubt of the modern, transnational man, but Changez does not have the self-doubt of the vacillating, footloose, confused world citizen of the 21st century in dialogue with a distrustful West. Instead, his self-doubt resembles that of someone who, in retrospect, feels he has made the right decision in the wrong world.

As Changez becomes more militant, he becomes a little too sure of the superiority of the Shalimar Gardens and Lahori jalebis. America begins to fade into the misty distance. Changez’s story takes on a momentum of its own as the criticisms of America grow fiercer. More and more, it is as if he is trying to convince himself of the moral and historical rightness of his return journey to Pakistan.

One cannot help but feel that Changez’s increasingly militant — but ultimately lonely — voice is the voice of Pakistan trying to convince itself that its problems are not so bad. Is this what Hamid wanted his character to embody? It is most unlikely that Hamid intended his book to contribute to a new form of Pakistani victim mentality that allows the country’s elites to deflect responsibility from domestic problems by pointing out that America is not all that it pretends to be. But occasionally, it can feel as if Changez speaks with just that voice. He pronounces historical judgements without the dissenting voice of a narrator or his American acquaintance.

This tendency becomes particularly pronounced in the portrayal of Changez’s relationship with Erica. The latter, like too many characters in the novel, appears as a vessel designed to demonstrate a particular pathology. The allegorical jump is easily made: Erica becomes ill again after 9/11; she will commit suicide, pulled down by her own memories. Erica, of course, is American Erica and her predicament is that of a nation. Changez, in returning to Pakistan, is fleeing a sinking ship. Thus, the ultimate superiority of the East over the West seems assured.

Again, the question seems prescient: is this what Hamid intended his characters to do? There are, I think, the beginnings of an answer in the book’s ending. As Changez is accompanying the American back to the hotel, he becomes aware that he is being followed, that something is about to happen, that he has, in some sense, been so absorbed in his own story that he no longer realises what is going on around him. This clever twist is the first moment of real self-doubt — the first time that Changez realises his own myopia. After a long evening during which he convinces himself that his choices were the right ones, he suddenly and momentarily realises that his has been a dialogue of the deaf.

It is no more than a flourish at the end, but with it, Hamid undoes some of the comfortable dichotomies he sets up. It suggests, if only briefly, that a great deal more is taking place outside the closed circle of Changez’s life story than he is willing to countenance in his monologue — and that may even be more important than what is taking place within it.

Whether this flourish is enough to offset the limitations of form that the book imposes on its central character remains a moot point. What is beyond doubt, however, is that Hamid has confirmed his reputation as an author of considerable talent. His taut, precise and sparse prose serves him well, while his mastery of pace makes his second book eminently readable. The Reluctant Fundamentalist deserves a place among the growing number of reflections on a globalised world still divided by its misunderstandings and misperceptions.