While President Musharraf continues to deny that he has any intention of packing up Parliament or dismissing the Jamali government, Islamabad is rife with rumours of an imminent political shake-up. The buzz is not without basis. The President’s men are already exploring a way out of the present stand-off that has paralysed the new political set-up. The endemic inertia that has gripped the Jamali government, coupled with the confrontation with the MMA administration in the Frontier, has provided added fuel for action.

The President’s camp is believed to be working on three options: one, bringing in a new prime minister through an in-house change; two, the imposition of a French style presidential form of government in which the prime minister has nominal powers and the removal of the MMA government in the Frontier. The dissolution of the National Assembly, is viewed as a last option. “One thing is sure, the existing state of affairs cannot last for long,” says a senior official. Although any concrete decision is yet to be taken, most observers believe that a change in the political set-up is just a matter of time.

Portents of a future arrangement are already visible with President Musharraf reasserting total control and sidelining Prime Minister Jamali to activities now restricted to offering condolences and inaugurating small development projects in his home province, Balochistan. In the absence of any leadership, there is total disarray in the cabinet and most ministers look towards the President for direction. Prime Minister Jamali remains a nominal chief executive as meetings on important national issues are jointly chaired by the President. Foreign affairs are the exclusive domain of President Musharraf, while the cabinet and Parliament are completely excluded from decision-making on important national security and foreign policy issues. So it was no surprise when during his visit to Washington, Musharraf announced, “Pakistan agrees in principle on sending troops to Iraq.” The issue has neither been presented before Parliament for debate nor discussed in the cabinet that represents a coalition of more than half a dozen political groups. Significantly, no elected member of cabinet was included in the presidential team on their visit to Washington and Europe.

For their part, the President’s men complain that Jamali is not competent to run even routine day-to-day government affairs, let alone deal with complex political issues. There are widespread talks about complete paralysis in the prime minister’s secretariat, as decisions even on postings and transfers remain pending for months. Relations have soured further with Prime Minister Jamali’s reluctance to remove his highly controversial special assistant, Brig (retd) Mansoor Hamid, and his political secretary, Yahya Munawar. They continue at their posts, despite a decision to ease them out. Squabbling within the PML(Q) ranks and the rift among the coalition partners seems to have further weakened Jamali, who was never President Musharraf’s first choice to begin with. Jamali’s fall-out with Chaudhry Shujaat Hussain, who was responsible for his election as Prime Minister, has further alienated him from the party. Cabinet ministers are publicly venting their frustration, accusing Jamali of a total lack of leadership. 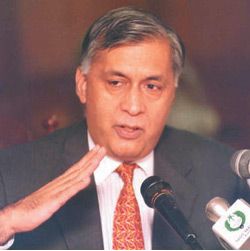 An in-house change with a new prime minister, preferably one close to the President, is being considered as the most desirable way to deal with the present paralysis. Shaukat Aziz, the high profile finance minister who was the only cabinet member to accompany the President on his Washington visit, is seen as the front-runner for the job. However, there are some roadblocks in the way. Aziz will not be welcomed by a large number of PML(Q) and other coalition members who would prefer to see a politician from within their ranks in the top job. He will also have to win a National Assembly seat. Commerce minister, Humayun Akhtar, who was Musharraf’s first choice for the job, and Jahangir Tareen, a prominent industrialist and a PML(Q) National Assembly member from Rahim Yar Khan, are also being considered as possible replacements for Jamali.

Although a change of face may help in improving the government’s image, it will not resolve Musharraf’s main problem of taming the strong opposition in the National Assembly, which has challenged his legitimacy. The combined opposition of the PPP, MMA and the PML(N) has blocked his address to the joint session of Parliament and crippled regular parliamentary proceedings. The President’s refusal to compromise on the LFO issue has dashed all hopes of reconciliation. All efforts by the ISI have failed to bring its old Islamic allies back to the fold. The MMA’s move to impose Islamic Shariah and Hisbah laws in the Frontier has further aggravated the situation, while Musharraf’s tough warning to the MMA that Talibanisation will not be tolerated, has brought the confrontation to a head.

The MMA government moved to enforce a harsh Taliban-like Islamic rule in the NWFP after it introduced new laws that will bring the province’s education, judicial and financial system in line with Shariah. The package of Islamic laws passed by the provincial assembly promises a rule based on Quranic laws and a ban on what it describes as “obscenity and vulgarity.” The government also plans to set up a “Vice and Virtue Department” to punish those found violating the new rules and establish Islamic courts dispensing summary justice.

The implications of the new Islamic laws could have even more serious ramifications and has brought the Frontier administration in direct confrontation with the federal government. The move to create a Vice and Virtue Department and a system of so-called Islamic justice will come into conflict with the country’s laws and the Constitution. The department is modeled on the religious police under the former Taliban regime in Afghanistan. Under the new law a station official in each district of the province, will be responsible for promoting religious observance. Many observers believe the new Islamic system conflicts with the Constitution and challenges the powers of the central government. Islamabad issued a strong warning to the provincial administration, that it would not tolerate lawlessness and said the situation in the region demanded the federal government’s intervention. A top level meeting chaired by President Musharraf decided to adopt a tougher stance against the hardline Islamic administration to limit the effects of radical Shariah laws and the move to establish religious police. As a warning the federal government sacked the provincial chief secretary and the police chief. Islamabad is also concerned about the Islamic government’s support for those Taliban remnants that are regrouping in the border region to fight against American and Afghan government forces. There has been a marked surge in attacks blamed on the Taliban across the border in Afghanistan, since the MMA came to power in the Frontier. 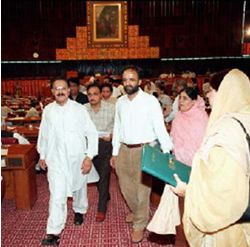 Another reason behind the tough stance taken by Musharraf is the worsening dispute between the NWFP administration and the local governments. Last month all 24 district mayors in the province tendered their resignations to President Musharraf, complaining that the MMA government had infringed on powers guaranteed to them under the devolutionary reforms introduced by the President last year. All these district government are controlled by anti-Islamic alliance parties. The resignations were only taken back after President Musharraf intervened.

Many observers believe the confrontation between the Islamic parties and the President is bound to worsen after his Washington visit. Hailed by President Bush as America’s crucial ally in the war against terrorism and extremism, Musharraf’s statement that Pakistan has agreed in principle on sending troops to Iraq and his suggestion that Islamabad should consider recognising Israel have intensified the clash. Musharraf’s promise to the United States to stop all infiltration of Islamic militants across the Line of Control has also brought him under attack from Islamic groups who accuse him of selling out to Washington. Musharraf’s turnaround on the policy of supporting the Taliban and his support for the United States had already strained the longstanding relations between the military and the mullahs, and the new developments, both in the foreign and internal arena, are bound to take them into an all-out war.

For more than three decades, the mullahs and military were part of an unholy alliance. The military-mullah alliance expanded and gained strength during General Zia’s military rule, when there was a complete convergence of interests between the religious right and the military. The military and Islamists had a common enemy — the mainstream liberal parties. General Zia’s brand of Islamisation was fully backed by radical Islamic groups who also recognised the military as the source of central authority and guardian of state power.

The mullah’s usefulness for the military goes beyond domestic policies. Islamic parties were also the military’s partners in the Afghan Jihad and later, supported the conservative Taliban regime. The regional and international climate of the 1980s favoured this alliance. Despite his liberal image, General Musharraf initially continued to support the Taliban which helped to maintain the alliance. The changed world post-September 11, forced General Musharraf to pursue a two-track policy to gain international and domestic legitimacy. In the interest of self-preservation and to safeguard the military’s institutional position, he abandoned the Taliban. With Pakistan once again a frontline ally, his administration actively assisted the US against Al-Qaeda and Islamic militants. The subsequent development strained, but did not sever the military’s links with the Islamists. It was tacit support from the military regime, which helped the MMA to achieve its spectacular success in the elections, albeit confined to only the Frontier and Balochistan provinces.

Subsequent political and international developments, however, appear to have resulted in the complete breakdown of the military-mullah alliance with the two erstwhile allies now firmly on the warpath. There are clear signs that the confrontation may lead to the removal of the Frontier government and efforts are already underway to manipulate its ouster.

President Musharraf, meanwhile, is already playing on the back foot as he takes on the MMA. He has no political ally in his fight for legitimacy. His refusal to accept the sovereignty of Parliament, coupled with the politics of expediency has alienated him from the liberal section of society. His present political support comes from corrupt and opportunistic politicians. But can he depend on them? Though the military may be fully behind him on his international policies, the situation may change radically if Musharraf fails to skilfully steer his way through the present political crisis.