“There is a conspiracy to defame the MQM” 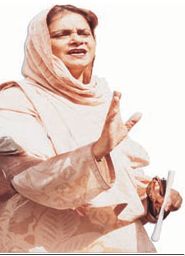 Q: There is a perception that with the MQM’s return to power, Karachi is witnessing the politics of revenge once again. Why does the MQM resort to vendetta, instead of dealing with its opponents politically?

A: This is absolutely untrue. The MQM is not involved in any kind of vendetta against its political opponents. Tell me of a single political party whose workers are being arrested or harassed by the MQM.

Q: Newspapers have been carrying regular reports of the witch-hunt being conducted against MQM (H) leaders and workers…

A: Do you consider MQM (H) a political party? I don’t think Haqiqi is, or ever was, a political party. Actually they are a group of people who were thrown out of the MQM on charges of being involved in criminal activities. They were later brought into the political arena and used against the MQM by the agencies in 1992. They were picked by the agencies at the behest of the then army chief, General Asif Nawaz, to create divisions within the MQM. General Asif Nawaz is on record as having stated that, “If there can be so many Pakistan Muslim Leagues, why cannot there be two MQMs?” Altaf Hussain was able to bring together all the mohajirs, on a single platform.

The MQM’s objective was to bring people from the middle classes to the echelons of power, and to eradicate the feudal system, and [a feudal] mindset from the country. When the MQM became a force to reckon with, the idea didn’t suit the oligarchy that had been ruling the country then. An operation was initiated against the MQM in 1992 and its offices were forcibly taken over by Haqiqi militants, who were transported there in army trucks. This policy of giving patronage and protection to the Haqiqi continued until November last year. In all the previous elections, the Haqiqi never managed to obtain more than two per cent of the votes. Even in the last elections, two of their candidates managed to win seats in the elections only because they didn’t allow a single polling agent of the MQM to sit at the polling stations.

As a matter of fact, Haqiqi hooligans were involved in raping daughters in front of their fathers. They had some 1,200 families thrown out from Landhi and held the entire area hostage at gun-point. MQM had been demanding that there should be no no-go areas in the city. In fact, these areas were freed only after General Pervez Musharraf directly issued the orders, and the support the agencies had provided to the Haqiqi previously was withdrawn.

Q: But still, how would you justify the demolition of the Haqiqi headquarters?

Q: Lately, there have been reports of the MQM’s involvement in collecting bhatta once again, and the recent case in which a MQM MNA was involved in attempting to extort money from TCS is a classic example. The MQM has been notorious for holding Karachi hostage.

A: This is a baseless charge against a party that has been representing the city politically for the last two decades. As for the charge of collecting bhatta, after the MQM realised that a conspiracy was being hatched, and that there were some rogue elements who were giving the party a bad name by collecting bhatta in its name, the Sindh Governor, Dr. Isharatul Ibad, issued an ordinance against these collections. He asked the city administration to take strict action against all those who are involved in such practices.

As far as the TCS case is concerned, certain individuals had been approaching the MQM to help them with their personal matters. Among them were some people who sought the MQM’s help to sort out their financial matters with TCS. Later, however, we found out that they were trying to blackmail the TCS officials, using the party’s name. We were, in fact, approached by the agencies, and we strictly told them to arrest all those who were blackmailing individuals by using the MQM name.

Q: But if the MQM was not involved in the TCS scam, then why were the accused released literally overnight?

A: MQM had nothing to do with their release. All those who were arrested were released under the due process of law. Of late, so many Haqiqi activists, who were involved in criminal activities like murders, rapes and dacoities, have been released by the courts. Now if someone is released by the courts, how can you blame the MQM for that?

Q: You are basically absolving the MQM of all charges. If the MQM is anti-crime, why did it manoeuvre Jamil Yusuf’s removal from the CPLC, where he was doing an excellent job as its chief?

A: Yes, CPLC had become an effective organisation under Mr. Yusuf. I would not like to comment on the reasons for his removal, but I believe that he had over-extended himself. In any case, he had served in that post for a while, and it was time he handed over the CPLC reins to someone else.

Q: It has been observed that many of those who had defected from the MQM are being targeted. The recent murder of former Sindh assembly deputy speaker, Raziq Khan, is a case in point. Why do those who defect from your party come to grief?

A:When have the killings in Karachi ever stopped? They have been going on endlessly, without any break. Exactly who is behind all these killings is a question that is not easy to answer. But you tend to forget that there are also people like Afaq Ahmed and Aamir Khan, who have quit the MQM, and are still alive. On the contrary, MQM leaders have been targeted and killed in the recent past. Khalid Bin Walid, a prominent member of the party, was killed recently. There have also been a host of other cases in which MQM workers and leaders have been killed.

Personally, we have been saying that some conspiracy is afoot against the MQM, to defame it. You have to see who stands to benefit from these killings. How could the MQM, who are in power in Sindh, possibly benefit?

Q: Who, in your opinion, is responsible for the murders? Why can’t you expose these people?

A:Well, it is very difficult to say who these people are. There may be some rogue elements within the agencies, who don’t agree with General Musharraf’s shift in policy against the MQM, or even the Haqiqi, who may be involved in all these killings.

Q: How can you say that none of the MQM workers have been involved in any kind of violence or terrorist activity when the newspapers are full of reports implicating the MQM in a host of terrorist acts across the city?

A: As I said, this is all, a part of the negative propaganda [that has been unleashed] against the MQM. MQM has never indulged in violence as a matter of policy. But whenever violence is committed against anyone, it is bound to breed more violence. As you are well aware, there have been so many innocent MQM workers who have been brutalised, and they may have retaliated as a result. But the MQM has nothing to do with the acts of individuals.

Q: The city government in Karachi has been accusing the MQM of trying to take over the development projects that were initiated by them. Would you comment?

A: The city government is trying to make an issue out of nothing. What did they do for the city in the one-and-a-half years when the MQM was not in power?

The truth about these development schemes is that each MPA has been assigned 50 lakh rupees for development in their respective areas, under the Khushal Pakistan Scheme. They are supposed to identify the projects in their respective constituencies, and these projects are to be undertaken through the city government under the new rules. So if these MPAs who have been allocated the funding, inaugurate a project which they themselves have identified, what is so wrong?

Likewise, recently Prime Minister Mir Zafarullah Jamali announced that 10 crore rupees would be allocated for the development of Landhi, Korangi, Shah Faisal Colony and Malir. MQM representatives have identified these projects, and there is nothing unusual if the representatives choose to inaugurate them. This actually serves to enhance the importance of the project itself, and the public gets to know about the work being carried out.

Q: All said and done, the general impression is that the MQM is a fascist organisation. Would you comment?

A: Well, that impression was created deliberately after 1992. There was a propaganda campaign orchestrated against the MQM after Operation Clean-up was launched. Look at the tragedy. Some 15,000 innocent people were killed, 1200 families dislocated, hundreds of other innocent people put behind bars — and yet the MQM was portrayed as a terrorist outfit. If you recall, soon after Operation Clean-up was launched, Altaf Hussain asked the elected representatives to go underground because the agencies wanted to force its members to switch over to the Haqiqi and to make them representatives of the city, without going through the election process.

Do you know why Dr. Ishratul Ibad left the country? The army raided his house, and picked up his eight-month-old son to pressurise his wife into disclosing his whereabouts. When his wife pleaded with them to leave her child alone, they threw him on the floor and one of his ears was damaged. The boy is now 10 years old and he still has a problem with his ears. There were some 28 MQM workers who were arrested during this period by the police, and there is still no trace of them. The fact is, they created this image of the MQM in order to justify their actions.