One plus three was the score this time around as the body count began after the two mohajir organisations, Muttahida Qaumi Movement (MQM) and Mohajir Qaumi Movement( MQM-Haqiqi) re-ignited the fire of confrontation. There are all indications that more bodies will fall before long.

A Muttahida activist was killed by unidentified gunmen during the recent by-election in Landhi. On the same day, bodies of the three Haqiqi activists were recovered from a school toilet in Lines Area. Their hands and legs were tied and torture marks were visible — a gruesome, though familiar story, bringing up unwelcome echoes from the past. The total tally of the decade-old dispute between the two factions notches upto 5,000 deaths, if not more.

“Mohajirs are sick and tired of picking up bodies. Sometimes they are found in gunny bags, hands and legs tied,” said Mohammad Yasin, 65, a garment shopkeeper from Landhi, once the headquarters of Haqiqi.

Muttahida, as expected, won the by-election with a huge margin and former MNA Dr Farooq Sattar was elected to the seat. His election finally brings an end to the long-standing domination of Haqiqi in the no-go areas of Landhi, which critics believe was engineered to put Altaf Hussain and his men at a disadvantage.

It was after 11 years that Muttahida chief Altaf Hussain addressed a rally in that part of the city, where his faction had become all but extinct. It is now busy in consolidating its position, while by and large people of the locality live in fear. “Who knows when politics will take another turn,” said cloth-merchant Mohammad Farooq. “When they (Haqiqi) were here I used to give them regular bhatta. Now maybe it is their (Muttahida’s) turn.”

Sources said the decision to demolish Haqiqi’s headquarters, Baitul Hamza, before the by-election was taken to give confidence to Muttahida’s supporters and the people of Landhi in particular. Irrespective of whether Bait-ul Hamza’s demolition by the Karachi Building Control Authority ( KBCA) was legal or not, the decision was clearly a political one, given the timing.

Sources said it all started just before the October elections, when Haqiqi leaders Afaq Ahmed and Aamir Khan were approached by the intelligence agencies who informed them that President Musharraf’s government needed Muttahida’s support.

Despite some disappointing results in the October elections, Muttahida retained its position as the second largest party in Sindh, after the PPP. This has been the trend in the province since 1988, and it was upheld once again However, as in the past, the establishment clearly wanted an anti-PPP government in Sindh, which strengthened the Muttahida’s position. 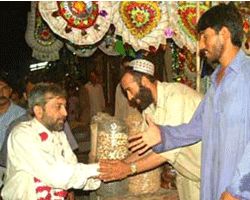 According to sources, Muttahida put forward two major demands during their negotiations with Musharraf’s team, led by his closest aide Tariq Aziz and some top intelligence agency officials. At first, Muttahida insisted on the post of Chief Minister for one of its own men. Eventually, they settled for Ishratul Ibad as Governor.

“Once the government was formed in Sindh and Altaf Hussain’s closest man, Ishratul Ibad, was nominated governor, we were mentally prepared for trouble,” said Haqiqi leader, Kamran Rizvi. “For how long will mohajirs have to run from their houses. First, it was Muttahida’s men and now it’s our turn,” he said.

“The only thing I know is that in 1992 there was a massive operation against Muttahida and thousands of mohajirs suffered, remaining underground, in exile, for long periods. Now, once again, it is mohajirs who will suffer.”

The Muttahida delegation met Musharraf and, following the meeting, an announcement on Khabarnama quoted Musharraf as saying that the no-go areas would be abolished. It was all over for Haqiqi.

Sources said that under the arrangement with Aziz, the establishment decided to abandon Haqiqi leaders Afaq Ahmed and Aamir Khan. This had been Muttahida’s premier demand from the previous government of Nawaz Sharif in 1997, but it was not met since Sharif had a soft corner for Haqiqi. What is most interesting is the fact that the man who allegedly gave shelter to Afaq and Aamir in the early ’90s, when Altaf’s men were after them, is also part of the present government. This is PML (Q) President, Chaudhry Shujaat Hussain.

Political analysts believe that while the no-go area has not been abolished, the group allowed to occupy the area has changed. Landhi, once out of bounds for Muttahida, has how become a no-go area for Haqiqi. Over the years, the country’s intelligence agencies have had a major hand in promoting the violent games played out between the two factions. Thousands of youth of both groups, particularly of Muttah-ida,were either killed in encounters or remained in exile for years. Sources said that during this period many activists joined the Tableeghi Jamaat or sectarian groups.

In the October polls, Muttahida lost some important seats to the Jamaat, which contested from the Muttahida Majlis-i-Amal (MMA) platform. The three most important seats that the MQM lost — including one in Hyderabad — were of Nasreen Jalil, Aftab Sheikh and the third lost to Haqiqi leader, Mahmood Qureshi, which fell vacant after his death.

The biggest problem now for Muttahida is how to regain its position in the city government, which is headed by the Jamaat’s Naimatullah Khan.

Sources said Muttahida wanted fresh local bodies elections, which they had boycotted, thus paving the way for the Jamaat to win. However, the establishment has made it clear that this is not an option.

Perhaps, some circles within the establishment still want to keep the ghost of Afaq and Aamir around to haunt Muttahida.”We were offered money and safe passage for our families, but I and Aamir refused,” said Haqiqi chief, Afaq.

It is yet to be seen how many more mohajirs will be killed in this ethnic strife. It is time that the people of the city were given a chance to go about their business in peace, but much still depends on the government and the invisible powers that wield influence on political affairs.

It is ironical that Muttahida, the party which survived one of the toughest military-police operations from June 1992-97, is now a part of the establishment while MQM (Haqiqi), which used to be called an “intelligence party,” is at the receiving end.

In any case, the vibrant city of Karachi remains vulnerable to the destructive effects of the games being played by the establishment. One thing is certain. The establishment is not prepared to tolerate popular parties for too long and the Muttahida would do well to be cognisant of this fact.