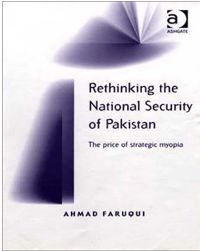 Pakistan’s existence as a sovereign political entity, over the past almost five decades, has been largely synonymous with the rule of its military over the country. So frequent and regular has been the army’s intervention in our statecraft that the clear line separating the political and defence domains from each other has been totally blurred in Pakistan.

With incorrigible and rapacious Bonapartes permanently occupying the ramparts of political power, an inordinate expansion in the army’s fortunes has become a hallmark of Pakistan’s national life. Defence has perennially hogged the country’s limited resources and expenditure on its bloated armed forces has constantly soared while other economic and social indices have plummeted to abysmal levels.

The army’s inordinate monopoly of power in Pakistan has spawned a political culture unique to the country. The army has brought ruin and degradation, repeatedly, to Pakistan. The most telling example of it was the dismemberment of Pakistan in December, 1971, at the end of a long, bitter and nightmarish uprising by the disenfranchised people of East Pakistan. Yet, in a truncated Pakistan, the army is still seen by the man on the street as the country’s ‘ultimate saviour.’ Even seasoned and grizzled politicians have, routinely, looked up to the GHQ, in any given political turmoil or crisis, to deliver the country from the ‘clutches’ of elected ( though not necessarily untainted ) civilian leaders. Both Benazir Bhutto and Nawaz Sharif fell victims to this national malaise. It is clearly a case of the Pakistani Bonapartes cannily succeeding in their pursuit to brainwash a whole nation and make it believe that they were the true guardians of its faith as well as of frontiers.

Ahmed Faruqui is a scholar and a specialist defence analyst based in the United States. With these unassailably sound academic and research credentials, he is well placed to develop a dispassionate insight on the complex issue of the rise of the military complex in Pakistan, and assess the damage it has wrought on national life. That is precisely what he has done in a painstakingly researched, elaborately documented and well-written book, challenging the stereotyped belief that the Pakistan army is the ultimate insurance, after God, for the country’s survival. That the puffed — up Pakistani Bonapartes have regularly fed this national myth- or paranoia — goes without saying.

In a damning indictment of the colossal misdeeds, petty foibles and failures of command by the much-hyped General “Tiger” Niazi on his watch in the beleaguered East Pakistan, Faruqui has judiciously listed at least nine cognisable offences of that playboy general. It may look surprising to many that a man of proven notoriety, and clearly lacking in the basic attributes of a fighter-commander who could lead by example, was put in the eye of the storm by his superiors. But the superiors themselves — headed by that hedonistic General Yahya — were a bunch of narcissists, incapable of looking beyond their noses.

Faruqui traces, with the cool and rational diction of a scholar, the phenomenal rise of Pakistan’s military complex since the demise of East Pakistan. From a level of 300,000 in uniform, it has gone past 600,000 in a quarter century. This strength is 50 per cent higher than the total British India army in 1947. By the same token, the military expenditure has grown by leaps and bounds. It averaged 3 per cent of the national GDP, between 1947 and 1971. However, it has since doubled to 6 per cent of the GDP. Faruqui highlights the debilitating impact of such a massive drain of limited and scarce resources on vital national services like health and education. These neglected sectors have had to make do with only 1 and 2 per cent of the GDP, respectively, in all these years of the rise of the generals and their megalomaniac agenda. No ‘defender’ or ‘redeemer’ of Pakistan has had the good sense to arrest, much less reverse, the precipitate slide of the country’s social indices.

With the aplomb of a scholar given only to cool and rational analysis, Faruqui also traces the rise in military expenditure in neighbouring India, which has often been the reason for Pakistan not lowering its guard. But India has a much larger economy than Pakistan and, comparatively speaking, can afford to apportion a much larger chunk of resources to its defence build-up. And the chauvinistic BJP government has been doing precisely that. It has recklessly taken India down the nuclear arms path to drum up the spectre of an India throwing its hat in the ring of the ‘great powers’. But this, as Faruqui adroitly points out, is a deadly misleading notion in a country of one billion plus people where more than half the population ( 515 million people ) still wallows in abject poverty, and 395 million are, on top of it, illiterate.

India may be intent on goading Pakistan down the path of ruin by not relenting on a nuclear or conventional arms race. With the generals calling the shots in everything, from defence to politics, Pakistan is squandering relatively much more on defence, per capita, than India — in fact twice as much. For every dollar spent on social services, India is allocating two dollars to defence while Pakistan’s allocation is four dollars. No wonder that Pakistan’s illiteracy ratio is almost double that of India’s.

Faruqui’s well-researched and deliberated conclusion is that a bloated army or hefty defence outlays do not, necessarily, ensure national security. On the contrary, most countries in the world, especially those which relied on huge armies in the past- such as U.S., China, Germany and Britain, amongst others — have come to realise that a smaller but well- trained armed force can be a more effective instrument of national defence.

That may all be very well and academically sound and logical. But Pakistan’s unique military-political culture would have none of it. For Pakistan’s pompous generals it is imperative that they preside over a gargantuan force, whether or not it makes economic sense or measures up to scales of social justice. Scholarly dissertations or analyses are works of academics and, in their books, belong only to libraries. What matters to the denizens of GHQ is raw power and its unabated and unabashed use to accomplish goals not necessarily related to the nation’s defence.

Hence, if their superior wisdom avers that godfathering the Taliban in Afghanistan buys Pakistan “strategic depth”, then this must be accepted as the gospel truth. By the same token, if they make an about-turn on the same Afghanistan and hitch their wagon to George W. Bush’s ‘crusade’ against terrorism, that too must be regarded as a stroke of genius and a blessing for Pakistan.

Which reminds one of a pithy quotation attributed to Jawaharlal Nehru: ‘most countries have an army but in Pakistan the army has a country.’