A group of around 25 police recruits, due to pass out within a week, were returning to their training school in a private pick-up after spending a weekend with their families. Two masked men, armed with Kalashnikovs, riding a motorcycle, approached their vehicle on the busy Sariab road, Quetta and sprayed the vehicle with dozens of bullets.

Some of the men were killed on the spot, and although the survivors cried for help, it took half an hour for police mobile teams to come to their rescue. By the time the men were shifted to the Civil Hospital, almost 11 had succumbed to their injuries due to heavy bleeding in the absence of any medical aid. One more died the next morning, due to grievous bullet injuries.

The police termed the incident a sectarian attack, as all the recruits belonged to the Persian- speaking Hazara Shia community and lived in the locality of Marriabad, in the city area. It was the third incident within a week in Balochistan in which Shias were targeted.

“Obviously it is sectarian killing, as 25 members of the same community were targeted, killing half and injuring the rest,” said DIG Quetta, Humayun Jogezai. When the men were shifted to hospital there was neither a surgeon available, nor any arrangement for blood transfusion. It took another hour for them to receive medical aid.

“We do not understand why doctors could not rush to the hospital to save the lives of our Hazara youth and whether the delay was deliberate,” said a provincial minister, Col. (R) Yunis Changezi, during a press conference. He further added that had there been doctors on duty and proper arrangement for medical aid, the death toll would have not risen to 12.

The recent spate of sectarian killings started from the city of Sibi, where an assassination attempt was made on a local Shia activist, Syed Saqlain Hussain Naqvi, by two armed motorcyclists. The victim was soon shifted to Quetta for medical treatment and his life saved. A few days later, Syed Niaz Hussain Shah, vice-president Nasar-e-Sajadia, was gunned down in Quetta, on his way to office, by two armed men. Despite claims that it was closing in on the culprits responsible for these attacks, the police have failed to track them down. 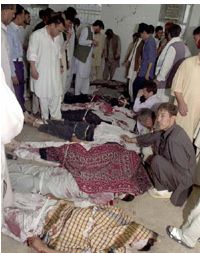 Balochistan Governor Lt. Gen. (R) Abdul Qadir, a shrewd soldier-cum-politician, immediately visited the relatives of the police recruits, announced payment of compensation (half million rupees for the dead and quarter million for the injured), and participated in the funeral rites, hoping to pacify the angry Hazara community.

According to government sources, there were reports available to intelligence agencies that the suspects belonged to the banned organisations, Lashkar-e-Jhangvi and Sipah-e-Sahaba. Dodging arrest in the Punjab, these groups may have started operations in Balochistan.

“The police should have done something about the security of the police recruits and Shia activists when similar attacks took place recently,” said a government functionary. In a belated move, the Balochistan government ordered the suspension of an area SP and the DSP police as a penalty for not taking proper security measures.

While the Balochistan government was still making round-the-clock efforts to track down the culprits, DIG Sibi range, Abdul Aziz Balu, was gunned down, caught in the crossfire in an encounter with robbers, along with other police personnel, including his bodyguards.

The Balochistan province has traditionally seen harmony prevail among the Shia and Sunni sects, but attacks on a sectarian basis started some five years ago and sporadic incidents like attacks on Imambargahs and Moharram processions have taken place.

Organisations like the Sipah-e-Sahaba and Lashkar-e-Jhangvi were let loose to issue poisonous press statements and speeches and indulge in wall-chalking against the Shia community. However, following last year’s ban and subsequent crackdown on sectarian organisations, the violence against the Shia community abated. A number of leaders and activists of Sipah-e-Sahaba publicly announced their disassociation with their organisations and joined political parties, particularly the PML(Q) to avoid arrest.

As compared to Pashtun society, Baloch society has always been liberal, tolerant and accommodating in respect of religion. However, fanatacism and extremism have made inroads, particularly in the Brahvi (Baloch ethnic group) belt after the Afghan war and the Kashmir jihad. The Hindu minority, who have lived under the protection of the Baloch for centuries , enjoying full religious freedom, have also been targeted.

The exclusively Shia Hazara community, comprising around 300,000 people, live separately in two localities east and west of the provincial capital of Quetta. While some traditionally belong to Balochistan, others came in through migration from neighbouring central Afghanistan.

As compared to other local ethnic groups, Hazara youth are becoming more educated and getting employment on merit, especially in the police’s lower cadre, causing resentment among other ethnic groups.

The role of political parties in the recent incident has been deplorable, as none of them showed up in the hospital on the day of the attack on the police recruits or attended the funeral. Except for the usual rhetoric and press statements, the parties had nothing to contribute.

However, the Balochistan chapter of the Human Rights Commission of Pakistan, taking a bold step, arranged a consultative one-day seminar to seek suggestions on ways to check sectarian hatred and bring harmony among various sections of life in Balochistan. The representatives of almost all political parties, including the MMA and ulema from different schools of thought, seized the opportunity to impress the audience with their rhetoric.

Through a declaration, the seminar demanded that the government issue a complete ban on using the mosque to launch sectarian attacks and preach violence. The participants also suggested the constitution of a committee comprising tribal elders, political leaders, ulema and intellectuals to check sectarian killing and help law enforcing agencies to arrest culprits involved in such incidents. Now it is up to the government to take these suggestions forward.