The Taliban may have retreated, taking with them the extreme controls on all forms of independent media in Afghanistan. However, even in present-day Afghanistan, being a journalist is not for the faint-hearted. With no tradition of independent journalism in the country, increasing insecurity, lack of information, absence of physical infrastructure and a deepening financial crisis, Afghanistan’s media are in an unenviable spot.

Though the Taliban are generally blamed for the controls that virtually eliminated all but the state media, even prior to the emergence of the Taliban, media were not entirely independent. “We did not even understand the concept of an independent media,” says an Afghan journalist candidly. “We did not have much exposure to the international media and thought that being aligned to one group or the other was quite normal.” The result was that the media derived its strength, financial resources and protection from groups, communities or individuals it was aligned to, rather than from recognition of its independence.

While media organisations have attempted to chart an independent path in the last five years, the recognition of this is slow to come, especially in remote areas where the role of a journalist is scarcely understood. In many rural areas, even today, survival is a matter of negotiations; who you know and how you behave determine your chances of survival in areas where the state has either not reached or exercises scant control. Being a journalist, however, entails challenging the very sources of power which could provide protection. For most journalists in rural areas, survival depends on balancing out conflicting interests, deciding what issues to report on, who to report about and when to report it.

Those challenged by such reporting often resort to their own form of summary justice, which may involve seizure of materials, and going as far as threats, detentions, tortures and finally murders. While the overt violence grabs the headlines, what goes largely unreported is the daily self-censorship exercised by all Afghan journalists. Whether it is deciding how much of the content may be considered against the tradition of the country and lead to reprisals or deciding whether the source of power in a remote area is too powerful to be criticised, each media organisation draws its own limits.

Tolo TV, owned by an Australian Afghan family, for instance, has been pushing the boundaries of acceptable programming by using a large amount of foreign content and snappy, urban-oriented entertainment programmes. However, many in the Afghan media feel “the TV channel goes too far in the current context of Afghanistan,” even while defending their own boundaries.

In the more remote rural areas, it may not even be the content that is offensive. There are instances where journalists asking routine questions have been detained by locals on suspicions of being spys on the assumption that that is the only reason why strangers would come asking questions. 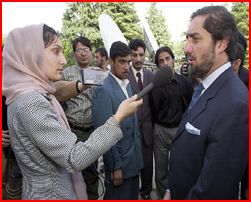 Reporting on the battle against the Taliban is fraught with danger. It is difficult to get to the areas where there is often heavy bombardment and ‘collateral damage.’ The Taliban have also ‘arrested’ several journalists who had gone into the areas where they hold sway, the most recent example of detention being the case of the Afghan journalist Ajmal Naqshbandi, who was finally killed by the Taliban.

Naqshbandi’s case starkly illustrates the double standards that exist for journalists in this country. Five-and-a half years after the liberation of their country, Afghan journalists still continue to be second-class citizens, inferior to their international, especially western colleagues. Whether it is sections of the international community or the Afghan government, international journalists find it much easier to access information and get interviews and appointments than their Afghan counterparts, especially those working for Afghan media organisations rather than international media outlets. Though this is partially fed by the language barrier (most Afghans do not speak English), there is sufficient anecdotal evidence suggesting that westerners and non-westerners usually receive different treatment. Fear of being completely blacklisted keeps Afghan journalists from lodging formal complaints, but not from sharing their grievances privately. Instances range from one in which an embassy kept Afghan reporters lined up in the sun for several hours while international journalists had lunch inside prior to a briefing, to requests for appointments being turned down without any substantive reasons.

Afghan journalists also work in conditions that are usually much more fraught with danger. Even while they run greater risks from societal displeasure, incurring the wrath of local commanders or criminals, they are usually poorly paid and unprotected in comparison to their Afghan counterparts.

Though the situation of Afghan journalists has improved over the last two years, even the occasional incident of discrimination is enough to reinforce the feeling of humiliation. However, international journalists also receive their share of humiliation, doled out regularly on grounds of security. Simple but routine examples are at the presidential palace where male journalists are lined up facing a wall, or when journalists outside the ISAF base have to stand, week after week, for usually an hour in the snow, rain or sun because five years have not been long enough for ISAF to build a tin roof that could shelter them.

While insecurity is a primary issue, it is not the only one. The lack of physical infrastructure makes operating a news agency a difficult task. Scarce power, especially in winter when power comes on for a few hours every few days, bad roads and insufficient technology plague news operations. An artificial economy sustained by the international community has made most buildings almost out of bounds for the ordinary Afghan with rents in thousands rather than hundreds of dollars.

Danish Karokhel, the director and editor-in-chief of Pajhwok Afghan News, worries about how to sustain his organisation. Pajhwok, like many other media organisations, was set up with a large influx of aid money. The funding has dropped sharply, and while Pajhwok currently raises 50% of its expenditure, it is not sure whether it can meet the shortfall when its funding is cut by another 50% from August 1. “A large number of journalists have become unemployed and have turned to other professions,” says Karokhel. Several media organisations have also folded up. In a farewell editorial, the editor and founder of Kabul Weekly, Fahim Dashty, spoke passionately of his struggle to keep alive the weekly before deciding he could not sustain it any longer. Unspoken among journalists is the threat that organisations unwilling to fold may start taking money from different and dubious sources. With the power of the media slowly unfolding, control of news organisations is to be coveted by those wielding power. 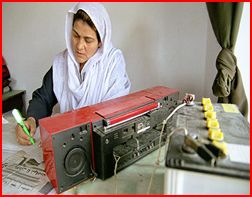 In fact, it is the success and reach of the independent media that has perhaps led to increasing calls for its control. In the struggle over territory and power, all sides expect the media to join the battle on their side. The government itself has resorted to a number of measures to control information. The last three years have seen increasing restraints on government servants, including doctors, policemen and teachers, who are asked to obtain clearance prior to any interaction with the press. In the absence of any databases, information-gathering depends, of course, on the willingness of people to speak to the press. More specifically, access to information can also be used to reward those who provide favourable coverage.

More direct attempts to intervene in press coverage include a mysterious memo that emanated from the president’s office before being disowned, which spelt out specific parameters for reportage. More recently, there have been attempts to impose restraints on the media through a media bill currently being debated in parliament.

Adding to the problems faced by the journalists is the difficulty of uniting different groups. While media organisations have been able to establish independence in reporting, it has been more difficult for journalists to unite on issues threatening media freedom. Years of ethnic, community and political divides still cast their shadows, as do gender stereotypes.

As managing editor of Pajhwok, Afghanistan’s single largest independent news agency, Farida Nekzad manages far more than news. Dealing with threats to her correspondents in the provinces and urging on her reporters in an environment where there are increasing controls on information, is no mean task. On a daily basis Nekzad has to counter conservative attitudes from society, which challenge her role as a newswoman. In an environment where women are expected to largely efface themselves or fulfill roles within their home environments, there is little space or respect for those like her. However, against all odds, Nekzad and a number of gutsy young women have come forward to take on the most challenging roles. As managers, newscasters, reporters and even photographers, they work shoulder to shoulder with men, demanding respect and stretching boundaries. They give hope that the Afghan media will find within itself the strength to counter the challenges of what promises to be a critical year.