Maqsood Ahmed sat in a corner of a tent packed with parents praying for news of their children trapped in the besieged Lal Masjid. An impoverished farmer from northern Pakistan, he had been waiting for five days to be reunited with his 12-year-old son, who lived in the seminary at the mosque.

His worst fears were realised as dawn broke on July 10, when loud explosions were heard coming from the compound. “I know he’ll be dead by now,” he said, holding back his tears. His son, Mansoor, was among the scores of students held hostage by the militants inside the Lal Masjid, or Red Mosque, in the centre of Islamabad. Only a few madrassah students could be rescued by security forces when they launched the final assault on Lal Masjid. Others, including Mansoor, were still missing as the military, still engaged in gun battles with militants, room by room, cleared the sprawling compound by nightfall. The operation against Islamic militancy came at a high cost: the loss of several innocent lives.

It was the first time that Islamabad had ever seen such a pitched battle being fought in the heart of the city. Heavy smoke drifted over the mosque complex, only a few miles from the presidential palace and the parliament building. Gunfire and explosions thundered across the city as Operation Silence unfolded. At times it seemed as if the entire complex was being flattened. Armed with machine guns, rocket launchers and grenades, the militants held out against security forces, who had laid siege to the complex since July 3.

President Musharraf ordered his troops to enter the mosque after an emergency meeting on July 9 and a final attempt to resolve the week-long stand-off failed. The government had set several deadlines for surrender and used scare tactics, including warning explosions and bursts of gunfire, to weaken the resolve of the mosque’s occupants. But the militants refused to surrender.

Led by the two brothers, Maulana Abdul Aziz and Maulana Abdul Rashid Ghazi, the militants for the past six months, had challenged the writ of the government by seeking to establish a Taliban-style rigid Islamic Shariah system in the capital. The stand-off intensified when the clerics established their own Islamic courts and their supporters raided houses dragging out women who, they alleged, were involved in prostitution. The situation came to a head last month when they raided a massage parlour and abducted some half-dozen Chinese women.

Moderate Pakistanis had expressed frustration over the government’s initial reluctance to take action against the growing vigilantism. One of the reasons for their inaction was the fear of collateral damage. More than 4,000 female students, many as young as five years, lived in the seminary and were used as human shields against the threat of use of force by the government. The Lal Masjid administration also threatened to launch suicide attacks if the government used force. Many of the students at the country’s largest female Islamic seminary are the children or relatives of militants killed fighting in Kashmir. Umm-e-Hassan, the head of Jamia Hafsa, boasted that she had trained many of them to become suicide bombers. 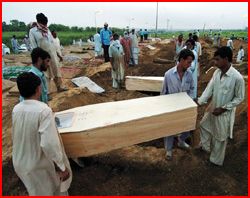 The radical clerics are said to have close links with Al Qaeda and Taliban militants operating from Pakistan’s lawless tribal region bordering Afghanistan. Ghazi had often boasted that he was a follower of Osama bin Laden. And in 2004, he was detained by security forces for his involvement in terrorist activities, but he was freed on the intervention of a federal cabinet minister. The mosque had become the centre of outlawed jihadi groups like Jaish-e-Mohammed, Harkat ul Mujahideen and Harkat-e-Jihad-Islami, which had also been involved in terrorist attacks in the country in recent years. Most of the militants in Lal Masjid were well trained and had fought in Kashmir and Afghanistan.

The Lal Masjid movement was an extension of the growing religious extremism creeping into the cities from the Frontier region. Ostensibly, the clerics had developed a close nexus with Baitullah Mehsud, leader of the Taliban militants in Waziristan, and Maulvi Faqir Mohammed in Bajaur. They also had close links with Maulana Fazlullah, the firebrand leader of the Tehreek-e-Nifaz-e-Shariat-e-Mohammadi (TNSM) in the Malakand region. TNSM, which was banned by President Musharraf in 2002, was founded by a pro-Taliban cleric, Sufi Mohammed, who is presently serving a prison term. The leadership of the movement has been assumed by his son-in-law Fazlullah, who rides a white horse.

The young cleric, also known as ‘Mullah Radio’ for his fiery speeches delivered from an illegal FM radio station, has developed a large following in the Pashtun areas bordering Afghanistan. He has established a rigid Shariah rule in the area, banning TV and music. In one of his speeches, the mullah warned women that their marriages would be annulled if they did not force their husbands to grow beards.

Pakistani security officials said the movement presents the most potent threat to national security as it has firmly developed into a satellite of Al Qaeda. The group has been involved in several attacks targeting Pakistani security forces. The deadliest of them was carried out in November last year when 40 soldiers were killed in a suicide attack on an army garrison in Dargai.

Fazlullah has declared “jihad” against the government following the military operation against the Red Mosque. Last week, his followers killed an army major and three other soldiers in a suicide attack on an army convoy near Swat. It was the second such attack on the security forces in a week. Pakistani security officials warned that the government planned to extend the crackdown to other parts of the North West Frontier Province (NWFP), which has been infested with militants who are being supported by the Taliban. “We have to move swiftly and decisively, lest NWFP falls under the aegis of Talibanisation,” said a confidential report of the interior ministry. 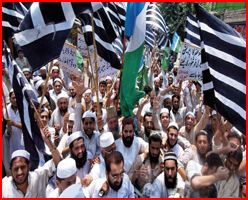 The raid on Lal Masjid marked one of the biggest crackdowns on Islamic militants since General Musharraf assumed power in a 1999 coup. Following the September 11, 2001, attacks, the military ruler led his country into an anti-terrorism alliance with the U.S. For long, the Musharraf government had pursued a policy of appeasement towards Islamists and tolerated the spread of militant Islam. The inaction had emboldened the extremists, who tried to create a parallel hard-line Islamic rule. But the Lal Masjid operation has changed the situation. The confrontation with radical Islamists can no longer be avoided. As one analyst remarked, it was a defining moment for both the country and the nation in the battle against militancy and religious extremism. There is no going back for Musharraf.

Public opinion is divided over the military action. The majority of Pakistanis supported Musharraf’s action. The Talibanisation movement launched by the Lal Masjid clerics did not elicit much public sympathy because of the manner in which they occupied the mosque and used it for their own objectives.

While the action has won Musharraf plaudits from moderate Pakistanis and western countries who, in the recent past, had expressed frustration over his government’s inaction, it also intensified the general’s confrontation with the Islamists. The latest encounter adds to the list of political challenges that President Musharraf faces as he seeks election for another five-year term in October. The judicial crisis triggered by his removal of the chief justice has remained unresolved. Lawyers and citizen groups who are opposed to the ouster of Justice Iftikhar Muhammed Chaudhry have continued their anti-government protests.

Speculation regarding the high death toll of women and young men in the Lal Masjid operation is developing into a highly explosive political issue for Musharraf’s government. The casualties could further turn public opinion against the military ruler. Pakistani officials maintain that they did everything in their power to avoid a bloodbath that they feared would bring worldwide condemnation of President Musharraf’s embattled administration. It is still not clear how many non-combatants were being held hostage or used as human shields. Last week, several of those who left the mosque, including young women, said that their colleagues were there of their own free will and were prepared to die.

The casualty figures have provided the Islamists with an important tool to mobilise anti-government sentiments. Tension is particularly heightened in the troubled NWFP from where most of the mosque’s seminary students were enrolled. The backlash would also test Musharraf’s resolve to fight extremism. The Lal Majid crisis has sharpened the ideological polarisation in the country and has drawn a battle line between the extremist and liberal forces. The battle for the soul of Pakistan is far from over.