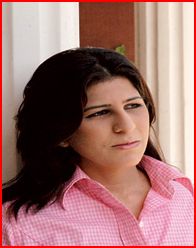 Mahnaz Malik’s office, an annexe to her parents’ house, looks very much like a converted storeroom. There is a visible duality in her office space. Intimidating leather-bound volumes, specialising in some aspect of law or the other, are curiously juxtaposed with bright, colourful posters on the wall, including one advertising Mo’s Star, and mementos of her travels.

In case neither of the names Mahnaz Malik and Mo’s Star ring a bell, the former is a lawyer by profession and the latter, her creation. Mo is the protagonist of a children’s picture book. Profusely illustrated with colourful drawings, Mo’s Star is more than just a wholesome bedtime story. The entire revenue generated from the sales of this Oxford University Press (OUP) publication, will go towards the Reaching for the Stars foundation, which, in turn, helps educate children studying in The Citizen’s Foundation (TCF) schools.

Mahnaz Malik is not just an award-winning lawyer, she is a writer, filmmaker and a philanthropist, who has to her young name many foundations that she has helped conceive. Among these is Advocate, an organisation that provides free legal aid to children in detention. Attracting lawyers to take on pro bono cases, Advocate has benefited lawyers and detainees alike. Just a couple of years old, Advocate has already helped several children who had been languishing in jails for years, awaiting trial.

Only 28 years old, Malik seems to have accomplished a lot in her professional career. But is this dynamic woman, who oscillates between Pakistan and the UK, quite content with her achievements? “I wanted to read literature,” says Mahnaz. “Law I studied for my parents.” After completing her A-levels from Karachi Grammar School, she went on to Cambridge University for her undergraduate studies. She describes her time at the university as the best years of her life. “I sat in on literature tutorials, wrote for various university publications. I ended up with a 2.1 (GPA) and it’s a wonder how I got a job,” says Malik.

At 21, she joined the London office of Simmons and Simmons, an international law firm, as a solicitor. In 2001, while still at the firm, Malik won two prestigious awards presented by the Law Society of England and Wales, the ‘National Trainee Lawyer of the Year 2001â€² and ‘Trainee Lawyer Most Likely to Succeed on the International Stage.’ Apart from these, she convened the British Pakistan Law Council, an internet-based organisation that allows for British and Pakistani lawyers to work in collaboration. A year ago, Malik said goodbye to her first job to enter into a “loose consortium of partners” that provide legal consultancy and representation to states, especially developing countries. On the side, Malik provides pro bono advice to Pakistan. Recently, the British Prime Minister’s wife, Cherie Blair, a lawyer herself, named her the “next big thing” in law as part of a Guardian newspaper project that invited celebrities to name their most promising protÃ©gÃ©s.

So how did Malik fit Mo’s Star into her hectic professional schedule? “It just happened,” says Malik. After graduating, Malik worked many months on a book that never really came together. When, year after year, her agent kept pursuing her to deliver, she sent in, instead, a short story about a penguin. To her surprise, her agent replied, asking her if she wanted to write a children’s book. That’s how Mo’s Star was born. It’s the tale of a penguin who perseveres to reach his friend, a star. After a failed attempt at flying, Mo finally reaches his star — and without having to attempt any impossible feats. Mo finds the star’s reflection in a pool. Soon, this little story for toddlers became a book with a cause and everyone involved, including OUP, waived their royalties. Mo’s Star was not Malik’s first attempt at writing. As a teenager, she published two collections of short stories and won awards for writing. That explains the fat Tolstoy sitting on her shelf and the beginnings of Mo’s Star.

During the course of our chat, I am introduced to Amma, the lady who brought up Malik, as the “kuree” who wrote for newspapers. It is rather amusing to hear Malik’s anglicised accent as she speaks in Punjabi. Amma proves to be the ice-breaker: after her entry on the scene I see a vibrant Malik, less crisp and professional than before. “You must meet my dogs,” says Malik. Three highly excited pugs bathe my feet with licks. The pugs and I share a common opinion. They consider the sinister-looking brass rhino from Swaziland, standing on one of the shelves, as evil. At the end of a grim day, it is these pugs that help Malik unwind.

After a long chat, I leave behind a very different Malik than the one I had met two hours earlier. Her inhibitions are cast aside, her red lip gloss has worn off, and she comes across as a vulnerable person, exploring life with all its twists and turns and searching for happiness like many others of her age.