More than a decade ago when the Cold War was coming to an end, the one question which perturbed some people, especially those who had stakes in keeping the conflict going, was: What would they do with their lives? This is a question that a number of people in Pakistan and India, too, will ask themselves once peace is restored between the two countries. And this is most certainly a question that the army and its intelligence agencies will ask themselves, particularly those sections in Pakistan that had thrived on the mission of jihad. The Pakistan Army’s involvement with the Afghan mujahideen in fighting the Soviet troops in Afghanistan is what laid the ground for jihad, which was then fought on other fronts as well. However, this is not a conclusion reached by the Indian author, Praveen Swami in his book titled, India, Pakistan and the Secret Jihad. 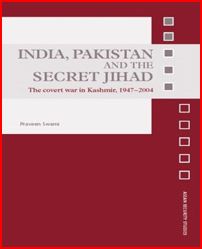 The recently published book tells the story of the jihad waged by Pakistan against India, dating back to 1947. Of course, the author does not view it as a freedom struggle but as an act of terrorism perpetrated by one state against the other. In fact, Praveen Swami chooses not to use the word ‘militancy,’ since this term also includes a non-violent struggle, which is different from the terror triggered by a combination of state and non-state actors. Although written from an Indian perspective, the book provides an interesting insight into the Pakistan Army’s strategy of covert warfare. The book seems to suggest that what started after 1989 was actually a full-blown strategy put in place in 1947.

Praveen Swami’s book uncovers an important facet of the Pakistan military’s operational strategy, according to which it systematically planned to use covert warfare tactics to fight an otherwise conventionally strong India. Since the conventional military technological gap between the two adversaries did not allow Pakistan’s Army to take Kashmir forcibly, it opted to use the low-cost and high-efficiency method of deploying both military personnel and non-state actors to fight the conflict. This, in Swami’s view, was also considered a relatively safer option because New Delhi could not launch an attack on Pakistan every time it discovered a secret cell inside Kashmir engaged in terrorist activities.

According to this book, the attack by the Mohmand, Afridi, Wazir and Mehsood tribes in 1947 was a planned action choreographed by General Akbar Khan. Even Jinnah, Swami states, agreed with the general principle of the plan; in the Pakistani leader’s view, the accession of Kashmir to Pakistan could not be stopped. In fact, the earlier leadership was not averse to the idea of capturing Hyderabad and Junagarh since they believed that Kashmir would, in any case, fall into Pakistan’s lap. It was primarily the Radcliffe Award that upset the plan, which Akbar Khan then decided to correct through planning the covert operation. The main problem with the plan was its dependence on tribal warriors, because, at the time, the Pakistan Army was in the process of reorganising after 1947. The warriors lacked discipline and instead of heading straight towards Srinagar, they engaged in loot, rape and plunder in Baramulla. This allowed the Indian forces to gain time and push the tribal warriors back.

In Swami’s view, this military fiasco did not, however, stop the army from continuing with its covert operations inside the now Indian-administered Kashmir. The author finds evidence of covert activities in 1955 and in October 1957 when an attack on a temple was carried out to incite Hindu-Muslim riots. The internal discontent was critical for planning any covert activities.

Interestingly, New Delhi’s politics have never helped improve relations between the different ethnic communities residing inside Kashmir. This socio-political weakness was exploited by Pakistan’s intelligence in planning Operation Gibraltar in 1965, says Swami, for which a master cell was set up in Kashmir in early 1965. The military operation was planned and executed by Maj. General Akhtar Malik, who was the general officer commanding of the Pakistan Army’s XIIth Division. The general trained 30,000 troops to be dropped behind enemy lines in Jammu and Kashmir. The problem, however, was that Operation Grand Slam, which was initiated on September 1, 1965, was launched at the wrong place and at the wrong time, and provoked massive retaliation by India. In fact, the plan completely backfired, with India’s XIth Corps capturing 362 sq km of Pakistani territory. More importantly, as pointed out by the author, a Muslim betrayed the plan to India.

The defeat in fulfilling its military objectives, however, did not deter the Pakistan Army from continuing with its covert activities, and a secret group called Al-Fatah was established in Jammu and Kashmir in 1969. More interestingly, the strategy of covert warfare was supported even by political leaders such as Zulfikar Ali Bhutto, who publicly lauded the gang responsible for hijacking an Indian airliner on January 30, 1971, contends Swami. Popularly known as the Ganga hijacking, the incident was read as Islamabad’s explicit support to the hijackers.

The Pakistan Army’s strategy got a fillip due to the conditions created as a result of the Soviet invasion of Afghanistan in 1979. Co-opted by the US to operationalise a covert warfare in Afghanistan, the Pakistan Army managed to train about 80,000 insurgents and also developed a capacity to export insurgents to other places, including Kashmir and the Indian Punjab. East Punjab was viewed as a theatre of sub-conventional war where maximum damage could be done. The strategy worked out fine until India, under the Rajiv Gandhi government, decided to respond by setting up two offensive desks in the intelligence agency, the Research and Analysis Wing (RAW). The two desks, CIT — X and CIT — J, were responsible for carrying out terrorist operations inside Pakistan, which then forced the head of ISI, Lt. General Hameed Gul, to meet his counterpart in RAW and agree on the rules of engagement as far as the Punjab was concerned. It was agreed that Pakistan would not carry out activities in the Punjab as long as RAW refrained from creating mayhem and violence inside Pakistan. However, both these desks in RAW were dismantled by I.K. Gujral’s government. The Indian government probably realised that encouraging covert warfare would not only destabilise bilateral relations but was also dangerous for the peace and stability of the entire region.

Unfortunately, this fact was not understood by the Pakistan Army. It continued to engage in covert warfare until it reached a dead end during the Kargil crisis and the 2002 India-Pakistan stand-off, says Praveen Swami. What the Pakistani strategists failed to understand was that the stability-instability paradox in a nuclear environment restrained a covert war against India. Given the nuclear deterrence on both sides, Pakistan could no longer afford to escalate tension by fanning insurgency. Although the author does not state this in his conclusion, the fact is that it is this realisation which seems to have influenced General Musharraf’s decision to put obvious curbs on insurgency and negotiate peace with India.

Islamabad has definitely come to a point where it can no longer raise an existing issue with its adversary by using covert or overt military means, which means that the army is inclined to sort out the Kashmir issue. However, the question is: What would the army do with its covert warfare capability? More importantly, how will it deal with the jihadis who have been trained for years to fight a war in other territories? Reading this book, one wonders if it will ever be possible to produce such a detailed account of the years-long covert warfare in Pakistan. Perhaps someone close to the establishment might get access to confidential details in the same manner that Praveen Swami did when writing his book.