A heavy baggage of incumbency has to be carried by any political party that has been in power at the time of elections. Pakistan People’s Party (PPP) has entered the 2013 elections with this disadvantage and much more — poor governance and unbridled corruption has tarnished its image among the urban population of Pakistan. And it had to bear the brunt of many external factors which were either inherited or were beyond its control. Another major disadvantage the PPP faces is that, like other centre-left parties, it is on the Taliban hit list, which has forced it to run a low-key election campaign.

But analysts believe the biggest shortcoming of the PPP is that there is no leader to lead its election campaign. President Zardari didn’t allow any credible PPP leader to emerge and relied heavily on his sister, Faryal Talpur, his foster brother Ovais Muzaffar ‘Tappi’ and the corrupt prime ministers he crowned. The charisma of Benazir Bhutto is no more and the sympathy vote which the party got after her assassination has dissipated. Most of the old guard are found saying, “It is no more Bhutto’s party, it’s the Zardari party.” But the fact remains that in spite of all the criticism and conspiracies which kept the PPP-led government busy in watching its back, the clever and scheming Zardari sailed his party’s government through five years — a distinction which no other political leader has.
Before moving forward to forecast PPP’s future it is wise to briefly review its five year-rule’s omissions and commissions to give the voters a fair assessment. The question voters would like to ask is, what has the PPP-led coalition delivered or failed to deliver in the last five years.

To get to the right answer, a dispassionate analysis of the party’s economic, political and governance balance sheet is in order. In the run-up to the coming elections, politicians and journalists are analysing PPP’s five years in bits and pieces and seldom with the required objectivity. 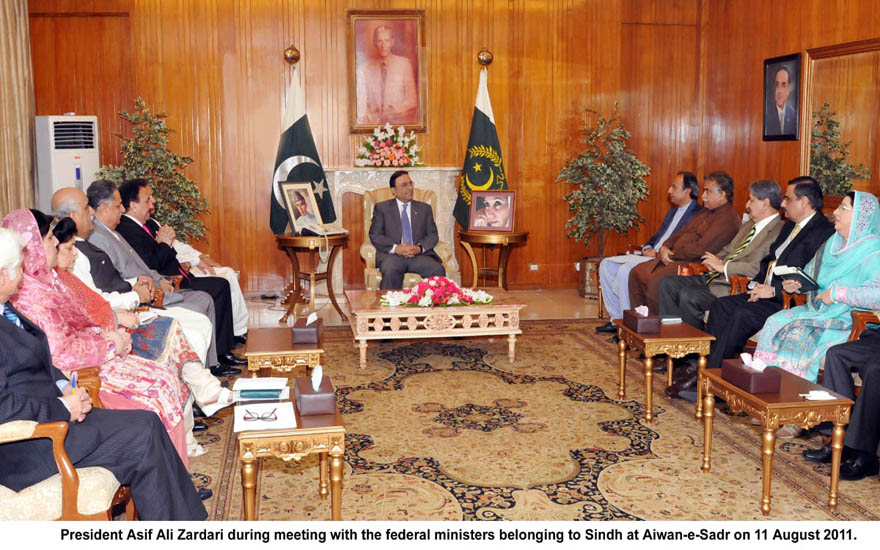 Much of the PPP government’s energy was consumed in the battle between the various institutions vying for supremacy over parliament. This tussle for more power between the normal institutions of the state power i.e. the executive, judiciary and the parliament, did not allow the system, which is in its infancy, to stablise. Unlike many other countries where democracy has evolved, in Pakistan the military has been a dominant force and has refused to accept the supremacy of any elected civilian government. This factor has played an obstructive role in the development of democracy and has led to destablisation.

The PPP-led government inherited the dangerous geo-strategic policies set by Pakistan’s military rulers. This embroiled the country in regional disputes with devastating social, economic and political consequences. Successive coalition governments’ attempts to build relations with India were sabotaged by the agencies and their jihadi outfits: Nawaz Sharif’s efforts were torpedoed by launching the Kargil operation and Zardari’s efforts were check-mated by the Mumbai massacre.

The country continued to suffer from the terrorist activities of the jihadi groups and the ruthless mismanagement of the Balochistan nationalist movement by the agencies. This not only resulted in the killing of thousands of people, it seriously damaged Pakistan’s economic growth. The PPP government failed to arrest control of the national security policy from the GHQ but is being held responsible for its failure.

However, when it comes to politics and diplomacy, the PPP government can claim some major achievements. It helped the bloodless ouster of a military general by the politicians. A great leap forward was taken towards transfer of power and resources from the center to the provinces through the 18th Amendment and the NFC Award, something which we could not do in 64 years. Arbitrary presidential powers to oust an elected government and dissolve the assemblies were taken away. Press freedom, which some people use to show their disappointment with democracy, is an integral part of the same democracy. The parliament, whose basic function is to legislate, passed 134 laws and most of them with the consensus of the opposition. More women rights bills were passed during PPP’s tenure than ever before. This is not a small feat.

However, on the governance side, the government proved grossly inefficient. Major failures for which the PPP-led coalition government is criticised are: corruption, energy shortages, increased unemployment, high inflation, low tax revenue collection, the impact of the public sector haemorrhaging the economy, depreciation of rupee against the dollar by 58% in five years, falling foreign direct investment and a low GDP growth.

The burden of checking corruption, which has affected development work and delivery in the social sector, has to be borne by the coalition government. There was no attempt to curb it inspite of a howling rage by the media. The level of corruption rose manifold during the last five years, compared to the record of Musharraf’s regime.

Energy crisis, which is at the top of all voters’ mind, could not be resolved by the PPP government, although it claims to have added 3500 MW in the last five years and started work on 24000 MW projects which would be completed in the coming three years. But 14 to 16 hours load-shedding in the country is going to be the major factor going against PPP this May. As for the voter, future promises have little value as past performance is the litmus test.

Another issue is that of the shortage of natural gas. It was amply clear during the previous government that CNG splurging is not sustainable. There are only three options to meet the gas shortage: import through pipeline, which is a long-term solution; import of LNG, which can ease some pressure in a shorter timeframe; and raise the gas price to attract more investment in the exploration and production of oil and gas resources of Pakistan. These are not ‘either, or’ options, as all these measures will have to be taken simultaneously. The stand taken by the PPP government to import gas from Iran was daring, as it was against the wishes of the US and its Saudi allies.

Low investment due to an unstable and insecure environment resulted in high unemployment rates and double-digit inflation in the country which has affected the PPP vote bank, as it had always claimed to be the party of the poor. Its leadership is banking on the Benazir Income Support Programme which, according to them, is helping 70 million poor families. They are expecting the recipients to vote for PPP. But there are reports of corruption in the distribution of BISP and Waseela-e-Rozgar funds by the local leaders.

Additionally, the Zardari government failed to impose the Regulatory General Sales Tax because of resistance from MQM and PML-N. This scuttled its efforts to raise more taxes and consequently fiscal deficit has remained high. Perhaps the biggest failure of the PPP government on the economic front was that the landless peasants and wage workers are still being exploited and their food security is at stake.

It is with this mixed bag of failures and achievements that the PPP is now facing voters in the coming elections. In the last elections it could win only 91 out of 272 National Assembly seats — KPK 9, Punjab 45, Sindh 33 and Balochistan 4. In the coming elections, because of the factors stated above, political pundits are of the view that other than from Sindh, PPP would be lucky to get even half of the seats from KP, Balochistan and Punjab. However, in the PPP leadership ranks the feeling is that the political right vote would be divided this time because of PTI’s popularity among the urban youth and the failure of the Jamaat-i-Islami and PML-N to make seat adjustments in the Punjab. Hence, the PPP hope they will bag at least 45 to 50 seats in collaboration with PML-Q. PPP is expecting more seats from Southern Punjab as they supported its demand for separation from the Punjab. In 2008, it bagged 20 out of 45 NA seats from Southern Punjab. Central and Northern Punjab, they concede, will go to PML-N followed by PTI. It is expected to be routed out from both KP and Balochistan and would be lucky to secure one seat each from these two troubled provinces.

PPP leaders believe that 25-28% of their vote bank is still intact, which will win the elections for them against the divided political right. But they forget that many of its voters are disenchanted with the Zardari-style party management and may not come out to vote.

There is a strong probability that PPP may not emerge as the major party in the elections, but it is likely to be the second largest party in the National Assembly. And it is the strongest candidate for forming a coalition government in Sindh. Contrary to urban-based and urban-biased analysts’ predictions, objectively speaking, in spite of Zardari’s negative image attached to PPP, the party is not yet over.