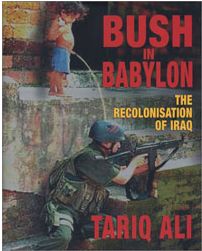 With the swirling madness of war around us we grasp at anything that makes sense of the events. Bush in Babylon provides us with some glimpses into what really led to the war in Iraq. Much of it we already know from the media scrutiny but it always helps to read it in sequence in a historical context. We now know that, and the author makes it abundantly clear that the US always planned on the conquest and occupation of Iraq, as a stepping stone to controlling the entire Middle East. This with the primary goal of stealing the oil resources of the entire area, and very importantly to keep the Arab world destabilised and weak to strengthen Israel. In fact, as seen now, the war has actually been fought for the ‘security’ of Israel, notwithstanding the fact that weapons of mass destruction do not exist anywhere in the region except in that very country.

What I liked about the book is that Ali, in almost a quarter of the text, delineates Arab and Iraqi poets and their expression of the Arab situation. He seems to have been in contact with many, and the conversations with exiled poets and quotes from their work add intellectual content to what would otherwise have been ‘more of the same.’ Conveying the suffering of the artist as emblematic of wherever humanity has been crushed in the face of corporate and hegemonic interests is quite effective and moving. Putting together poetry, history and politics reads well. This from Nizar Qabbani, the Syrian poet is very powerful:

Ali, going as far back as expansionist policies after the war with Spain in 1898 and through to the present, tracks the oppressive policies of the US in the Caribbean, Central and South America, and the Far East, and after the Second World War its expansion into Cuba, Chile, Argentina, Nicaragua, Vietnam, Saudi Arabia, Lebanon, Iran, the Philippines, Indonesia, East Timor, and so on. From the British occupation of Iraq after the first World War to the current US-British occupation, Ali contends that it is a “part of a long historical process that was disrupted by the twentieth century and is now back on course.” According to him, the process was disrupted by the Cold War, and now with the Soviet Union dismembered, there is no real impediment in the path of colonial capitalism.

Ali also very successfully reveals the imperial ambitions of key personalities within the Bush administration and how war profiteers close to Bush are having a field day. Harshly critiquing the way the Bush administration has dealt with Iraq in the aftermath of 9/11, he refers to them as corporate looters. There is also a painstaking analysis of the rise and fall of the political parties and politicians in Iraq, the Iraqi Communist and Baath parties, the rise of Saddam Hussein, and a good description of the relationships between the Kurds, Sunnis and Shiites.

On reading the book one realises that Iraq has been for centuries the epicentre of almost every intractable reaction against colonial ambitions, first against the Ottoman Empire, then the British and now the US. It is shockingly revealed that in all the modern-day struggle over who controls the oil and the many puppet regimes installed by the imperial powers in the area, one can generally sense the sinister designs of the Israeli establishment.”In 1948, the weak and divided Arab armies (mostly controlled by the British ) were hurled into battle with Israel. Defeat was not inevitable, but the political and military leaders of the Arab states, in polar contrast to the Zionist leadership, lacked the will to win. The Zionists, armed by the retreating British Empire, had organised and trained their supporters well. The Arabs were disabled and disarmed by the corrupt elite that led them….Nearly half a century after the Suez war, another Arab country was preparing to be invaded by two imperialist powers backed by Israel.’

For me the most captivating chapter is the one titled ‘The Jackal’s Wedding.’ On the eve of the war , while Anglo-American politicians and their favoured journalists were busy stifling dissent with a barrage of lies, a platoon of carefully chosen quislings were assembled in a London hotel to discuss the future of Iraq after ‘liberation.’ It conjured an image in the poet Saadi Youssef’s mind of a jackal’s wedding. In Southern Iraq, on a summer’s night, in order to recover from the day’s heat, people in the villages often sleep in the open air, underneath a starlit sky. Their peace is sometimes disturbed by a conclave of noisy jackals, some engaged in mating, others clamouring to be next, a few simply quarrelling. After an hour or more, it reaches a climax. By this time the noise and stench is unbearable. Suddenly the animals depart. Next time they will meet elsewhere, but whenever and wherever they do, the villager’s recall, with disgust, the nights disturbed by a jackal’s wedding:

…what are we to do about the jackal’s wedding
You remember the old days:
In the cool of the evening
Under a bamboo roof
Propped on soft cushions stuffed with fine wool
We’d sip tea ( a tea I’ve never since tasted)
Among friends….
…
then a cackling explodes
from the long grass and date palms-
the jackal’s wedding!
…
today isn’t yesterday
(truth is as evanescent as the dream of a child)-
truth is, this time we’re at their wedding reception,
yes, the jackal’s wedding
you’ve read their invitation:
…
I’ll go in your place
(Damascus is too far away from that secret hotel…)
I’ll spit in the jackal’s faces,
I’ll spit on their lists,
I’ll declare that we are the people of Iraq-
We are the ancestral trees of this land,
Proud beneath our modest roof of bamboo.

This poem had the desired effect, notes Ali with satisfaction. The pro-occupation gathering is now referred to as ‘the jackal’s wedding’ by many Iraqis.