After months of bloody confrontation and the loss of more than 120 lives, the Pakistan army and pro-Taliban Islamic militants in South Waziristan finally made peace with each other in late April. The unwritten agreement which silenced the guns and restored peace in the Wana valley is still holding, but the contentious issue of the non-Pakistanis allegedly hiding in the area could cause it to snap.

The army commanders and the militants resisted the temptation to declare victory after concluding the agreement. Rather, both took pains to describe it as a reconciliation between estranged brothers. However, partisans of both parties lost no time in proclaiming victory for their respective sides and launching a diatribe against each other. The MMA leaders, who backed the militants and were critical of the military operation in South Waziristan, contended that those on the army’s wanted list meant no harm to Pakistan and it would be wiser to befriend them rather than turning them into outlaws. Federal Information Minister, Sheikh Rasheed Ahmed, and Interior Minister, Faisal Saleh Hayat, who played no role in forging the peace agreement, claimed that the government had achieved all its objectives by forcing the five most wanted tribal militants to surrender and flushing out the so-called “foreign terrorists” from their stronghold in the Azam Warsak area near Wana. Predictably, their claims provoked the militants and one of them, Maulana Mohammad Abbas, issued a statement to remind the ministers to check their facts with the military authorities before “opening their mouths.”

The tit for tat notwithstanding, most tribespeople in the seven Federally Administered Tribal Areas (FATA), including South Waziristan, and the several frontier regions of the NWFP welcomed the reconciliation. The fighting around Wana had spread to other parts of South Waziristan and military convoys and installations had been attacked in North Waziristan and the Kurram tribal agency as well. Peshawar too was attacked with rockets, apparently fired from the nearby Khyber agency. It was the first time that the city, which had suffered frequent bomb explosions while serving as the headquarters of the Afghan “jihad” during the 1980s and early 1990s, was rocketed. The fallout of the Wana conflict was increasingly being felt beyond FATA. 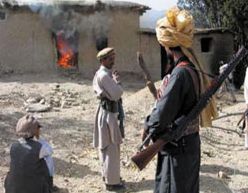 Supporters of the MMA and PML-N, the most vocal and bitter critics of the Wana military operation, also felt relieved when the soldiers and the militants publicly embraced each other at Shakai, a remote, mountainous village in South Waziristan. The thought that Muslims and Pakistanis were killing each other had made them sad and angry. In their view, the military action was being dictated by the US and was endangering the unity of the country.

The PPP, ANP and other secular and nationalist parties also criticised the Wana military operation but, unlike the MMA, their sympathies didn’t lie with the militants. Rather, one of the major objectives of these parties while criticising the military action in Wana was to condemn the President, General Pervez Musharraf, and Mir Zafarullah Khan Jamali’s government. As usual, the political parties based their reaction to the Wana operation on their respective political stances towards President Musharraf. There was no inclination or effort to objectively analyse the Wana situation and respond to it in a manner that served the much-abused national interest.

Far more important for the government was the international, or rather the US reaction to the Shakai agreement. After a cautious response by the US military spokesman in Afghanistan, Lt Colonel Matt Beevers, in which he welcomed the political process as a means to an end in tackling the problem of Al-Qaeda and Taliban suspects in South Waziristan, his boss, General David Barno, came up with a tough statement expressing concern over the amnesty offered by the Pakistan government to the foreign militants reportedly hiding in the area. He said the US expected action by the Pakistan army against the Al-Qaeda and Taliban suspects. Coming on the heels of aggressive statements by Zalmay Khalilzad, the US ambassador to Afghanistan, in which he questioned Pakistan’s commitment to hunt down Taliban fighters operating from Pakistan’s border areas, it was obvious that Washington was exerting pressure on Islamabad to do more in America’s war on terror.

However, one had to weigh this tough public posture by Washington’s men on the spot in Afghanistan by comparing it with the frequent praise that top US government functionaries, ranging from President George W. Bush to Foreign Secretary Colin Powell and from Defense Secretary Donald Rumsfeld to Deputy Foreign Secretary Richard Armitage, shower on Pakistan and President Musharraf on account of his contribution to the war on terror. No doubt that it is a calculated policy aimed at keeping Pakistan in good humour as well as under constant pressure. Moreover, one is aware that a few days before his outburst against Pakistan, General Barno rang up Corps Commander Peshawar, Lt. Gen. Safdar Hussain, to congratulate and thank him for formulating a policy that would isolate Al-Qaeda by draining it of its local support in South Waziristan. In fact, the US general reportedly told his Pakistani counterpart that there had been no cross-border raid by Pakistan-based militants in Afghanistan for more than three weeks after the army operation and the initiation of the reconciliation process in South Waziristan.

Lt. Gen. Safdar Hussain, who served in the ISI’s analysis wing before his promotion and appointment as Corps Commander Peshawar, is very optimistic about the success of his political-military strategy in regard to dealing with homegrown Islamic militants and their foreign guests in South Waziristan. He had barely taken over when the government asked him to send his troops to South Waziristan to deal with the militants after they had routed and killed 15 militiamen from the paramilitary Frontier Corps in an ambush near Azam Warsak.

As he kept losing soldiers in combat with the battle-hardened tribal militants and the collateral damage caused by the military operation increasingly engendered the ire of the tribesmen against the army, the Corps Commander reflected on how he could win the trust of the tribespeople. He realised pushing a development agenda — i.e. bringing schools, clinics, roads, electricity and enlightenment to the under-developed and conservative tribal areas such as South Waziristan — would be a vital step in that direction. Furthermore, it would deny the militants favourable conditions for their sustenance.

The militants recognised that real power in the country was wielded only by the Pakistan army and it could be expected to deliver on its promises. Besides, they trusted no one else. The corps commander also realised the compulsions of the militants, who wanted a face-saving agreement after having declared “jihad” against the Musharraf government.

The amnesty offered to Nek Mohammad and the remaining most-wanted tribesmen — Sharif Khan, Noor Islam, Maulana Mohammad Abbas and Maulana Abdul Aziz — was aimed at weaning them away from the non-Pakistanis allegedly linked with Al-Qaeda and Taliban. Two pro-MMA MNAs from South Waziristan, Maulana Merajuddin Qureshi and Maulana Abdul Malik Wazir, were requested to serve as mediators because they shared a pro-Taliban ideology with the tribal militants. The militants until then had refused to strike a deal through the many tribal jirgas that had attempted to make them surrender to the military authorities in return for amnesty. Aware of the sensitivities of Nek Mohammad and his tribal militants, the corps commander agreed not to refer to the Shakai jirga as “surrender” and instead described it as “reconciliation.” Also, the militants did not lay down arms. Rather, they presented an array of gifts, including an old sword, Waziristani daggers, prayer mats, “maswak” (wooden tooth brush) and “tasbeeh” (prayer beads) to the corps commander and other civil and military officers who accompanied him to Shakai.

There is no doubt that the 27-year-old Nek Mohammad emerged as a hero in the wake of the Shakai agreement. The young man, with his flowing hair and beard and piercing eyes, earned nation-wide recognition when he recited an Urdu couplet before making a spirited speech at Shakai to the applause of his armed men. His supporters credit him with putting up a tough fight against the Pakistan army and then forcing it to strike a deal with him on his terms. Though he promised not to fight the army or harbour foreigners again in return for amnesty, he managed simultaneously to prevail upon the government to release the 163 local tribesmen and Afghan refugees arrested by the military during the Wana operation in March, compensate all those tribesmen whose homes were demolished or damaged in the fighting and provide more money for development work in South Waziristan. More importantly, he and his men are maintaining that they made no promise to deliver the wanted non-Pakistanis to the government.

This indeed could threaten the vague agreement that was concluded at Shakai. The army want help from Nek Mohammad and his supporters to convince the foreigners to register and seek amnesty in return for a promise not to use Pakistan’s territory for attacks against any other country, including Afghanistan and the US. Military officials believe they would be able to neutralise the foreigners through their offer of amnesty as they have done in case of the tribal militants such as Nek Mohammad.

One will have to wait and see whether the military’s optimism is realistic or misplaced. Following the hoped-for neutralisation of Pakistani tribal militants, the registration of the foreigners and their numbers and level of importance would be the second yardstick to measure the success of the army’s political-military strategy in South Waziristan and the rest of the tribal areas.