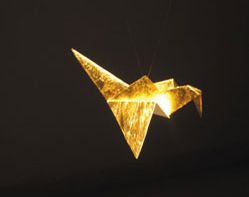 Since the 1950s many new combined forms of art have been developed that do not fit readily into any of the traditional categories. Two of the most important of these, environment and kinetics, are closely enough connected with sculpture to be regarded as branches or offshoots of sculpture. Actual movement or kineticism is now an important aspect of sculpture, whereby sculpture, components are moved by air currents, magnetism, a variety of electro-mechanical devices, or by the participation of the spectator himself. The aim of most kinetic sculptures is to make movement an integral part of the design of sculpture and not merely to impart movement to an already complete static object. The environmental sculptor also creates new spatial contexts that no longer confront the spectator as an object, but surround him so that he moves within it as he might within a stage set, a garden or an interior. The most common type of environment is the “room” which may have specially shaped and surfaced walls, special lighting effects and many different kinds of contents. Environmental art has tended towards greater concreteness, not by making a more realistic representation as natural art does, but by including more of reality itself in the work, by using actual objects, lighting effects and real items of furniture. Plastic elements may be combined with music and sound effects, dance, theatrical spectacles and film to create so called happenings in which real figures perform on real objects and on the actual environment.

A combination of environment and kinetics was in evidence in Karachi recently when an exhibition of a video and sound installation by Kathy Hinde and Mathew Fairclough was mounted at the VM Gallery. The exhibition was sponsored by the British Council and VM Gallery and the surround sound system was courtesy Phillips.

For our audiences, installation is a fairly new artform and the play of sound effects even newer. Titled ‘One Thousand Words,’ this installation was inspired by the true story of a young Japanese girl. Twelve-year-old Sadako Sasaki developed leukemia as a result of radiation from the bombing of Hiroshima. Recalling the Japanese legend that anyone folding a thousand paper cranes is granted a wish, Sadako began making origami paper birds. She only managed to fold 644 before she died — her friends finished the rest so she could be buried with a thousand. A statue of Sadako holding a golden crane was built at the Hiroshima Peace Park in memory of her and all the children who were killed by the atom bomb. Every year on Peace Day, people from all over the world fold paper cranes and send them to Sadako’s statue. 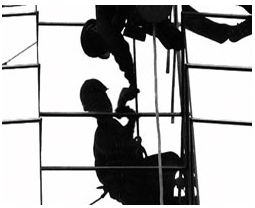 As part of her residency programme with the VM Gallery, visiting artist Kathy Hinde has been interacting with children of our local schools. Together they have managed to fold one thousand origami paper birds. Strung closely together, they were hung from the ceiling in the centre of VM Gallery as two paper walls. Fragile, vulnerable and very tactile, they evoked curiousity. Inevitably one fingered them and read the messages of peace the children had written on the wings of the birds. But for a holistic experience one needs to view the hanging up close and from afar.

Sitting on the benches placed on either end of the gallery, one actually experiences the calm and peace of a walk in the woods on a sunny day. A surround sound spatial composition, created from recordings of larks, spins around the room, creating a wholly natural environment. The song of the lark is said to have been the only sound heard on the French battlefield at the end of the First World War. The side walls were covered with shadowy reflections of dappled foliage with sunlight streaming through them. Video images of origami birds being folded, strung together and hung from trees were projected onto one side of the hanging. Images of paper birds floating down a river, through reflections of trees, were projected on the other side of the paper mass. A gap between this hanging was just wide enough for a person to walk through. The only thing missing was the leafy smell of a floral or pine-scented freshener to give that complete feeling of the sights, smells and sounds of a stream in a woodland grove.

The adjoining gallery had three smaller installations, more in the nature of commemorative sites where offerings are laid. Instead of natural recordings of larks, the sound effects here were metallic as those of chimes, gongs and temple bells. Likewise, the entire ambience was that of a temple or shrine.

Installations like these alter the art experience, from just seeing, to that of viewing, touching, feeling and imagining. The concept of peace here was not a painted image but a felt experience. If Kathy is to be credited for her sensitive projection of a fragile concept, Mathew’s sound effects deserve equal acclaim for their appropriateness and evocation.

Kathy Hinde is a practicing artist from the UK with a sustained interest in inter-disciplinary work, ranging from video events to site-specific sculpture, multimedia projection, theatre and dance. Mathew Fairclough is a sound designer who lectures on electro-accoustic music and indulges in composition and sound engineering.

This installation is a technology-based art form relying heavily on current sound and video engineering for outward expression. The entire rendition was handled very imaginatively in a naturalistic manner, which appealed to the senses.