“Our films use women as puppets” 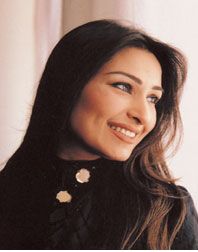 Q: Why have you not signed up any films in the last three years?

A: I have been so disgusted with the quality of films produced that I do not wish to star in them. What message are we conveying to society with this kind of vulgar work? Who is watching the films that our heroines are busy acting in? In the last two years, judges have had a hard time nominating movies for awards. That shows the sorry state of affairs of our film industry. I would like to be like Aamir Khan and maybe do just one film a year, but one that I could be proud of. Meanwhile, I am doing concerts all over the world, which no other filmstar is doing.

Q: But in these last 10 years you have acted in 175 movies, many of them mediocre, so why the sudden change of heart?

A: Movies were not so bad then — they were entertaining and glamorous, but not vulgar. There’s a very thin line between glamour and vulgarity. I am all for glamour but not cheap exhibitionism. Admittedly, we have to move with the times, but simultaneously we must also realise that our society does not permit us to cross certain boundaries, and so we should conduct ourselves with dignity.

Q: Do you feel that you have done every role you might have ever wanted to, or is there any character that you still hope to do in the future?

A: Artists are never satisfied with the roles they perform. Whenever I look back, I always feel I could have given a better performance. The role I am playing in my own movie has a lot of scope. I feel that the trend in the past has been to not give a margin of performance to female stars, and I want to break that tradition. With regards to any specific role, I think I’ve done all kinds of characters.

Q: So how is the film Koi tujh sa nahin, that you are directing, going to be different from the norm?

A: It’s a purely female-oriented storyline, and is a socio-commercial film. Currently, our films use women as puppets. If a great director like Syed Noor does make films around them, he uses only Saima — even if he wants to portray a teenager — and gives no one else a chance. I am bringing in new talent in my film.

Q: What makes you think that you can succeed as a director?

A:Well, for one thing, I’ve worked very hard and learnt a lot in the course of my career. It is not necessary to go through an academy to learn the ropes. The fact is that no matter where you learn the art, what directors project on the screen are their thoughts and views. My film depicts my thinking with regard to women and their problems and society at large. Therefore, what I will be providing is not just entertainment, but also a message to audiences.

Q: Who is starring in your film?

A: Among the seniors, there is Nadeem Sahib, Moammer Rana, Irfan Khoosat and myself. Among the newcomers, there is the Jazz girl, Furkhia Mirza — who is the second Jazz girl after Zara Sheikh to join the film industry — Babrik Shah and Veena Malik. So it’s a combination of new and old faces. I made sure that the story was completed before deciding on the cast.

Q: Your fans are very disappointed that you hardly said anything at the Zee Awards, and that it was Resham rather than you, who made an entrance with Shahrukh.

A: I was furious because I had prepared a speech in English and just before I came on, Jawed Sheikh and Resham appeared back-stage to tell me to speak in Urdu. Considering that I was on an international platform and everyone was speaking in English so as to reach out to a wider audience, I was offended that I was not being allowed to deliver my prepared text. So, as a mark of protest, I just announced the award and left. As for being escorted by Shahrukh, even he was surprised that he wasn’t going to enter with me, but Resham had made a big thing of it, so I felt there was no point in creating a fuss. We have to learn to rise above ourselves and when we go abroad, especially, we should not make self-projection our focus, but rather the image of our country. Our industry might be small, but if we indulge in such petty acts, then we make ourselves appear small as well.

Q: How fruitful was your visit to India last year?

A: It was a very good experience. My trip was really a peace mission as I had gone in response to the President’s call to further ties between our two countries and to spread the message of love and change the negative image of Pakistan. When people realised my motive for being there, they went out of their way to help me. In fact, even the busy stars found time for us. Hemaji invited me for breakfast to her house, Dharamji invited me for lunch, Rakesh Roshan and Hrithik Roshan’s family invited me for tea and dinner. Dilip Kumar and Saira Bano also had me over for tea and, in fact, Amitabh Bachchan, who does not meet anyone during shooting, especially took out time for me.

I was also on the cover of Bal Thackarey’s magazine and have the honour of being the first Pakistani woman to appear on its cover, and about whom a very positive article was written.

Q: In the recent past you have been heard advocating co-productions. Will this help save Pakistan’s dying film industry?

A: I am not in favour of Indian films being released here but, yes, I do believe that there should be joint ventures that are released in both countries simultaneously.

Q: Why aren’t you in favour of Indian films being screened legally? Our industry thrived in the face of competition once, and it could do so again.

A: We can only think of competing once we start doing decent work. With the kind of rubbish our industry is churning out, there is no scope for competition. Those days have long gone when we could hold our own — now our industry will disappear altogether.

Q: How do you compare our film industry to that of India’s?

A: The equipment that India is working with is what is being used in Hollywood today. We, on the other hand, are still using 56-year-old machines. Not all of India’s movies are blockbusters. From the numerous films they make in a year, only three or four might be runaway successes, but because they have such a huge market, they can get away with producing mediocrity. There is a separate market for art films, which no one is interested in here. We make only commercial films, which have such a negative image that talented people don’t want to join the industry.

Q: Did you discuss any joint ventures during your stay in India?

Q: You have lost a lot of weight.

A:I jog two miles every day. Mashallah, I eat everything and don’t diet at all. In fact, that is why my hair is so beautiful.

Q: Your English has improved considerably. Have you been taking lessons?

A:I keep striving to improve my image and that of my country. I did courses from the British Council and when I went to London, I did a two-month language course there.

Q: You are the new Pepsi girl. How was the experience of doing the Pepsi commercial?

A: A lot of preliminary work went into creating the commercial. My hair had to be cut, its style changed numerous times, the colour changed, and I had to go through numerous auditions and get-ups before they finally made their selection. The actual shoot in Malaysia only took five days.