A problem postponed is a postponed problem. It seems General Pervez Musharraf is discovering the hidden wisdom of this saying — and that, too, the hard way. Specifically, he’s been experiencing the truth of this phrase through his dealings with the still-continuing and sensitive issues revolving around the dubious activities of Pakistan’s star nuclear scientist, Dr Abdul Qadeer Khan. Under intense international pressure, and in the face of a flood of evidence that countries like Libya and Iran have shared with the International Atomic Energy Agency (IAEA), Pakistan’s President was forced to take the unpalatable decision of dislodging AQ Khan from his pedestal and putting him behind bars.

That was just the beginning of a string of hard decisions that General Musharraf had to take: sharing evidence gathered from Dr Khan’s close associates, all of whom were arrested to face legal charges; discussing with international investigators the once totally off-limits details of Pakistan’s nuclear programme; and supporting the US-led effort to track down peddlers of nuclear contraband.

The testimonies made before the committee by four specialists leaves nothing to the imagination as to what kind of problems await Pakistan’s nuclear programme. The common theme in these presentations relates to the new thesis that the Khan network is still operational and, moreover, Pakistan continues to use the remains of this network to beef up its own nuclear stocks.

Consequently, tough demands have been voiced: Pakistan needs to give international investigators direct access to Dr Khan and must share more information about the network’s operatives who are still at large.

Therein lies the rub for Pakistan’s nuclear programme, and indirectly for General Musharraf, who was spared no punches in the testimonies.

Pakistan’s official stance offered by the spokesperson of the foreign office, and one which was ironically repeated two weeks before the testimonies opened, is that the AQ Khan case is closed, that there is no question of allowing foreigners access to Dr Khan and that Pakistan has been totally sincere in sharing all that it knows about the operations of his network and the individuals involved ever since the scandal broke out two years ago.

Even though the international community has not bought into these claims 100 per cent, President Musharraf found some comfort in the wake of the case hitting international headlines from Washington’s guarded but positive public statements indicating that the US and Pakistan were on the same page as far as the Dr Khan Network was concerned. Also, US President George Bush often used the dismantling of the Khan network as an example of his foreign policy success, suggesting that the issue is dead and gone and thus creating a favourable impression of Pakistan’s cooperation in this matter.

But that was for public consumption. In private, the US never closed the file on Pakistan. Cable traffic from Pakistan’s embassy in Washington constantly notes “increasing and oft-repeated demands” by US officials to get “more information from Khan.”

High-ranking military sources also admit that the US has not been pleased with the “Khan’s men” getting out of the jar without facing any punitive action. Sources say that in the beginning, the US was adamant that they needed to get hold of Dr Khan to question him outside Pakistan — a demand that was firmly resisted and finally rejected by General Musharraf.

“We had to do a lot of work to convince Washington otherwise. It was a flat demand, but could not be turned down flatly because they were bent upon getting maximum information. We had to find a mutually acceptable way to do that and, in the end, we said, ‘We will do the investigation and share the outcome with you, but Khan Sahib is off-limits,’” says one government insider.

There is no word available from official circles as to how they plan to deal with the resurgence of the Khan issue, especially the serious charge that Pakistan is failing to share information because it is still benefiting from the network’s remaining roots. 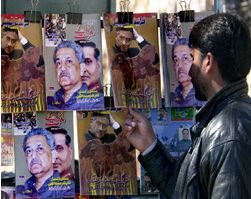 There is enough evidence, however, to suggest that everyone in the decision-making hierarchy is exceptionally touchy about the Khan episode. The foreign secretary, Riaz Muhammad Khan, expressed this anxiety a few weeks ago when he complained to a group of journalists that the media does not know where to draw the line, quoting the Khan case as an example of irresponsible journalism.

President Musharraf, too, does not take kindly to the ongoing debate about the future of the Khan case in the Pakistani press.

However, the matter is beyond the control of the local journalists. American media is following the hot saga like a heat-seeking missile.

Most foreign newspapers and international networks have reporters dedicated to the Khan case, many of whom have been chasing the story in Islamabad, where many people heaved sighs of relief thinking that the storm had blown over.

But now that the House of Representatives has started formal hearings on the subject, private concerns are playing themselves out on the public stage much to the embarrassment of Islamabad.

The general theory doing the rounds in Pakistan’s official circles states that this is a ploy by the US to whip Islamabad close to Washington’s stand on Iran and to warn Islamabad of the dangers of getting too intimate with the Chinese. The more profound analysis is that Washington is strengthening the case so that they can eventually target Pakistan’s nukes by declaring its whole set-up of nuclear management as unsafe and dangerous to global security.

The last scenario is the least talked about publicly. But, if it is true that all this digging of old dirt is to place Pakistan in the nuclear doghouse, then the scenario becomes the most troubling of all.