The Charter of Democracy has kept both ‘hailers’ and ‘wailers’ extraordinarily busy ever since it was signed by Benazir Bhutto and Nawaz Sharif in the middle of May. It’s a remarkable reality for a society that is commonly viewed as thoroughly depoliticised. The only plausible explanation for this unexpected response to the charter is that it came at the right time — when the public was groping for some sign that democracy would be restored by the end of 2007. So, the first welcome effect of the charter is that it has shown that the people of Pakistan have not completely abandoned politics.

The charter is not the talisman for instant admission to the world of democratic wonders that the ‘hailers’ wish us to believe, nor is it the damp squib the ‘wailers’ claim. Both sides have tried to confuse the public by failing to take the charter for what it is, nothing more and nothing less. Moreover, they have ignored the critical fact that the signing of the document by the leaders of the two most important mainstream parties is more significant than what it says or does not say.

The PPP and PML (N) have been the dominant political players on the national scene since the fall of the third military regime (of General Zia-ul-Haq). Each of them gave priority to the other’s destruction and did not hesitate to collaborate with the president or the military to bring the rival party down. The confrontation between them made them and the political system vulnerable and also created a major road block to democratic revival. An accord between these two parties doesn’t guarantee an early return to democracy, but it was an essential step towards the goal.

The coming together of erstwhile adversaries for the sake of democratic revival is nothing new. Political parties in Pakistan have spent more time forming alliances against the establishment than they have devoted to promoting democratic norms. The Movement for the Restoration of Democracy (MRD) during the 1980s was the last grand alliance of political parties that included political groups that otherwise had been at each other’s throat only a short time before.

These alliances always defined their objectives in terms of contemporary relevance. For instance, the principal objectives of the alliance against the Ayub regime were the restoration of a parliamentary system and direct elections to national and provincial assemblies. But today, a statement of priorities for the democratic forces must be more elaborate than what was required 20 years ago, simply because institutions of governance have been distorted over the past three decades to a much greater extent than ever before. This also offers a measure of the struggle that the revival of democracy demands today. 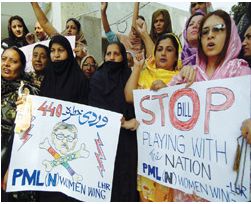 The charter has a long preamble which no party has been able to reject. The multi-faceted political crisis and the set of responsibilities of the signatories to the charter cover familiar ground. To the ideal of undiluted democracy, the authors have added respect for fundamental rights, internal party democracy, tolerance, cooperative federation, provincial autonomy and the empowerment of the people. Perhaps the only thing missing here is any mention, among the victims of oppression, of workers and peasants.

The critics of the charter, who have concentrated on omissions, have perhaps confused the charter, which is relevant only for the immediate task of restoration of democracy, with a new constitution for Pakistan. A statement on the requisites of transition to a democratic polity cannot be like the manifesto of a political party or its workplan after democratic revival. Thus the Charter of Democracy concentrates on changes in institutions of governance and not with what the institutions will do eventually.

While dealing with the constitutional framework, the authors of the charter have stayed close to the democratic consensus in the country. Besides calling for the revival of the 1973 Constitution as it stood on October 12, 1999, they have been prudent enough not to reject the restoration of a joint electorate, the lowering of the voting age and the increase in women’s reserved seats. The abolition of the concurrent legislative list and constitutional reforms in FATA and the Northern Areas are demands nobody disagrees with. Considerable attention has been given to the need for ensuring independence of the judiciary, and the idea of institutionalising the selection of superior court judges and initiating a procedure of public hearings for their confirmation have been publicly debated for quite some time. For obvious reasons, special attention has been paid to securing guarantees of free and fair elections, though recommendations on the subject are limited to the process of forming an independent election commission and a plea for a fair and level playing field for all political parties.

Much can be said about what the public expected from the Charter of Democracy yet found to be absent. Perhaps the charter’s main flaw revolves around the fact that its target audience is Pakistan’s middle class intelligentsia and, consequently, that has determined the idiom and the language used by its authors. The need to link suggestions for the restructuring of essential institutions with the mundane aspirations of the masses, seems to have carried little weight. This deficiency can be met by party cadres, though, provided they mobilise to convert the masses to their point of view.

That the charter is silent, or is not sufficiently clear, on matters that figure high on the agenda of the poor is less of a problem than the difficulty a vast majority of the people apparently have in accepting the credentials of the signatories. This certainly does not mean that the credentials of those who have flourished solely by demonising Benazir Bhutto and Nawaz Sharif, or other politicians, have become worthy of respect. Nevertheless, the people may demand definite assurances from the authors of the charter that they will indeed honour their words more than they did so in the past. Their past record apart, they have lost credibility, to some extent at least, by falling into the establishment’s trap and preferring the discomfort of exile to suffering oppression at home. Political activists in both parties feel they have suffered for their democratic convictions more than their leaders. This impression can only be removed by a new pledge to offer sacrifice in the cause of democracy.

But what would happen if both Benazir Bhutto and Nawaz Sharif announce that they will not run for any political office in the immediate future? Will the Charter of Democracy inspire the people to challenge the establishment with street force? Perhaps. In fact, the proposition offers a better prospect for a return to democracy than any other idea recently floated.