A new “Great Game” has begun in Afghanistan. But this time it involves a different set of players. India and Pakistan are small compared to the once mighty British and Russian empires that played out similar games in the past, but that has not detained the arch-rivals from fighting a proxy war in the war-ravaged Central Asian country.

Strategically located Afghanistan has always attracted the attention of both countries. Before Pakistan’s creation in 1947, it was a neighbour of undivided India and, as such, had a history of close ties with the Indian people. That relationship dated back to the period when the Buddhist-rooted Gandhara civilisation and, later, the Hindu Shahi kingdoms flourished in the border regions of ancient Afghanistan and the India of yore. Britain, at the peak of its power, made Afghanistan a buffer between its Indian empire, known as the British Raj, and the Czarist-ruled Russia.

After independence, India and Pakistan carried their feud beyond their borders to other places, including Afghanistan. Unsurprisingly, they often backed rival political forces in the country. The Afghan government of King Zahir Shah became a natural ally of India in 1947, when it turned out to be the only country in the world to oppose Pakistan’s membership in the United Nations. Since then, relations between Afghanistan and Pakistan have never been cordial. There were periods when the two countries overcame their inherent hostility to each other, but these ties lacked sincerity and friendliness.

It is true that King Zahir Shah assured Pakistan not to worry about its border with Afghanistan during the former’s war with India in 1965 and that Kabul and Islamabad forged close relations from 1992 to 2001 when the Afghan mujahideen and then the Taliban ruled. However, successive Afghan governments continued to promote the cause of Pakhtunistan as a separate homeland for the ethnic Pakhtuns inhabiting both the North-West Frontier Province (NWFP) and Balochistan, and, at the same time, refused to endorse the porous, 2,500 kilometre-long Durand Line as the international Pak-Afghan border.

Another major irritant in their uneasy relations were differences over the Afghan transit trade. Pakistan complained that goods imported by Afghan traders overland through Pakistan were mostly smuggled back into Pakistan. In a tit-for-tat action, Kabul hosted armed-and-equipped dissident Pakistani tribesmen and nationalist politicians, and Islamabad adopted the same policy with regard to Afghan dissidents.

In contrast, India managed to maintain friendly relations with all Afghan governments until April 1992 when the mujahideen came into power following the resignation of Afghanistan’s last communist president, Dr Najibullah. India had welcomed the communist Saur Revolution in Kabul in April 1978 and supported the Soviet invasion of Afghanistan in December 1979. Firmly in Moscow’s camp, India opposed the Afghan mujahideen, who were headquartered in Peshawar and received political, monetary and military assistance from the west, Arab countries, China, Iran and Pakistan. India lost influence from1992, when the mujahideen came to power, up until December 2001, when the Taliban collapsed. It continued to support the Northern Alliance, which comprised mostly non-Pashtuns, unlike the Pashtun-led Taliban. It also gave refuge to the widow and daughters of late Afghan president, Dr Najibullah, along with other anti-Taliban figures who fled Afghanistan when the ultra-conservative Islamic regime captured power.

The fall of the Taliban regime, following the US invasion of Afghanistan and the return of the Northern Alliance to power as a dominant partner in the President Hamid Karzai-led coalition government, presented India with an opportunity to regain its influence in the country. It was now India’s turn to be welcomed by Afghanistan’s new rulers and offered an important role in rebuilding the war-devastated country. Pakistan meanwhile, lost its dominant role in Afghanistan and was reduced to being a marginal player. Gone were the days when governments for Afghanistan were made in Pakistan. Those were times when the Afghan mujahideen’s governments-in-exile were derisively called “made in Rawalpindi” and “made in Peshawar” regimes. President Karzai was referring to that period when he critically remarked recently that Pakistan should stop dreaming of ruling Afghanistan again, as it had done in the recent past, and instead accept the ground realities. It seemed he was belatedly reacting to President Musharraf’s outburst earlier on CNN in which he argued that Karzai didn’t know that people in his government were undermining Pakistan by fuelling the insurgency in Balochistan at the behest of India.

India and Pakistan are now actively involved in promoting their respective images and winning influence in Afghanistan. It is mostly one country gaining at the expense of the other. India has given $650 million for Afghanistan’s reconstruction compared to Pakistan’s $250 million. 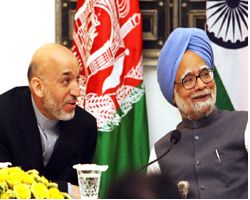 New Delhi has also picked up better and more visible projects, including construction of Afghanistan’s new parliament building, roads and telecommunication facilities. After having wasted its money in the past on ungrateful warlords, Pakistan has finally decided to undertake projects directly beneficial to the common man. These include building roads, schools and hospitals, and training professionals in different sectors. However, progress on these projects has been slow.

Many new irritants have contributed to the rivalry between India and Pakistan in Afghanistan. Pakistan openly criticised the opening of Indian Consulates in Afghan cities such as Jalalabad and Kandahar near its border. Top government functionaries have publicly accused India of fomenting trouble in Balochistan and Waziristan by using its diplomatic missions in Afghanistan to fund and arm dissident Pakistanis, including the Baloch fighters, and to send Afghans across the border to indulge in subversive activities in the tribal areas. The fact that a number of Indian companies have won large road construction and other contracts in the southern and southwestern areas of Afghanistan that border Pakistan has also alarmed Islamabad. The dominance, though somewhat diminished, of the pro-India Northern Alliance in the Afghan government is also a matter of concern for Pakistan.

Aware of the animosity of the Afghan government and media towards Pakistan on account of the latter’s pro-Taliban policy in the recent past, India has done everything to win the goodwill of the Afghan people through generous assistance for reconstruction projects in Afghanistan. New Delhi, in partnership with Kabul, is also pushing to open the Pakistani land route for transit trade between India and Afghanistan. US pressure could force Islamabad to open its overland trade route. This would contribute toward economic integration of South Asia with Central Asia and benefit Afghanistan, India and Pakistan, but Islamabad will demand something substantial in return before extending the favour to New Delhi.

The biggest challenge to any meaningful economic partnership between the three countries, which in turn could lead to political cooperation in the region, is the Taliban resurgence. The increase in Taliban attacks and the insecurity that it fuels has already poisoned relations between Afghanistan and Pakistan.

Despite Pakistani denials, the Afghan government, without providing any evidence, continues to accuse the Pakistan Army of aiding and abetting Taliban attacks within Afghanistan. The recent abduction and beheading of Indian telecommunication engineer Suryanarayana by Taliban fighters in Afghanistan added a new dimension to the conflict. Indian foreign secretary Shyam Saran’s reference to “the sponsors of Taliban” being responsible for Suryanarayana’s death was taken as a veiled reference to Pakistan. Terming the Taliban demand that all Indians leave Afghanistan within 24 hours in the aftermath of Suryanarayana’s abduction as outrageous, he argued that it testified to the real motivation behind the act of terror: Islamabad’s reservations over a growing Indian presence in Afghanistan, particularly in provinces that border Pakistan.

With neither side willing to concede ground, there is every possibility that India and Pakistan will continue to fund a new proxy war in Afghanistan.