The recent sacking of General Stanley McChrystal, the US and NATO military commander in Afghanistan, due to his insubordination, and his replacement by his former boss General David Petraeus has brought the Afghan conflict into sharp focus. This has led to a heated debate about whether it is time to talk to the Taliban or continue the military offensive against them.

There have also been reports in the media — mostly unconfirmed — about fresh contacts between the Taliban and the government of the beleaguered Afghan president, Hamid Karzai. Pakistan’s role as a mediator was highlighted following reports that its military authorities were keen to facilitate contacts between the Afghan government and Taliban leaders, many of whom are hiding in Pakistan. These reports gained credibility due to public statements by Pakistani government functionaries that they were willing to approach the higher tiers of the Afghan Taliban leadership and act as a mediator between them and the Karzai administration. At times it appeared that Islamabad was eager and somewhat in a hurry to play this role.

According to an Al Jazeera English TV report, Pakistan’s army chief, General Ashfaq Parvez Kayani and ISI’s General Shuja Pasha had flown Sirajuddin Haqqani, the young leader of the Haqqani network of the Afghan Taliban, to Kabul on their plane for a secret meeting with the Afghan president.

This was denied by all sides. The Afghan government refuted the report and requested the media to check facts beforehand. Pakistan’s military authorities also issued a denial.

The Haqqanis, through their spokesman, rejected the report and termed it baseless. In fact, one of the Haqqani aides laughed at the naivetÃ© of the Al Jazeera reporter when approached by this writer to comment on the report. He made it clear that Sirajuddin Haqqani and his men were part and parcel of the Taliban movement and would never strike a deal on their own.

The media report didn’t take into account the fact that the ground hasn’t been prepared yet for meetings between Karzai and top Taliban commanders like Haqqani. It is unlikely that such a high-level meeting would take place without this, even if the Pakistani military is involved. Also, the Pakistani generals would not take any action that indicated Islamabad’s involvement in harbouring and supporting the Afghan Taliban.

Besides, the Haqqanis would never agree to disassociate themselves from the mainstream Taliban as such a step would cause strife in their own ranks and weaken their strength. After having come this far and showing their military prowess in fighting against the US-led coalition forces over the past several years, they would not only jeopardise their position, but also destroy their reputation by striking a separate deal with President Karzai.

However, speculation about contacts with the Taliban refused to go away. One media report said Islamabad was considering handing over Mullah Abdul Ghani Biradar, the deputy leader of the Afghan Taliban captured in a joint US-Pakistan operation near Karachi in February, to Kabul. Earlier, Islamabad had refused requests by Kabul and Washington to deliver Biradar to the Afghan government. Instead, it allowed access to US intelligence agents to interrogate Biradar in the presence of Pakistani officials. Pakistan has handed over some captured Afghan Taliban figures to the US and Afghan governments but Biradar would be the highest-ranking ever.

In recent weeks, relations between Islamabad and Kabul have improved as President Karzai sought Pakistan ’s help in reaching out to the Taliban. The bitterness of their ties characterised by allegations against each other, particularly Kabul’s claim that the Pakistani ISI was harbouring Afghan Taliban leaders, are now a thing of the past. Both sides have for some time now been observing a kind of ceasefire and refraining from publicly criticising each other. Even though it seems they still have misgivings about one another, these issues are now discussed behind closed doors.

One indication of this was Kabul’s belated willingness to send some of its military officers for training to Pakistan. The Pakistan Army had made this offer some months ago but the response from the Afghan government was not positive. The US, which currently has a lot of influence in Afghanistan, wasn’t in favour of the idea as well due to Islamabad’s close ties with the Taliban in the past. In fact, many Afghan intellectuals and politicians along with sections of its media opposed the training of Afghan military and police officers in Pakistan as they felt it would provide Islamabad another opportunity to interfere in Afghan affairs.

But the mood in Kabul seems to have changed and now there is a better understanding of Pakistan’s concerns with regard to the situation in Afghanistan. One of the major ones is the growing Indian influence in Kabul and the fact that Baloch separatists and certain other Pakistanis considered anti-state by Islamabad are able to find refuge in Afghanistan.

One factor that appears to have brought Kabul and Islamabad closer is said to be the recent removal of Afghanistan’s interior minister, Hanif Atmar, and intelligence chief, Amrullah Saleh, both critical of Pakistan and also opponents of peace-making or power-sharing deals with the Taliban. Although the Taliban attack in Kabul on June 2 on the occasion of the Consultative Peace Jirga due to a security lapse became the immediate cause of their resignations, it is felt that President Karzai had already lost trust in them and was waiting for an opportunity to replace them. Atmar, a former communist, has been replaced as interior minister by the Afghan army chief, General Bismillah Mohammadi, but a replacement for Saleh has not been found yet. 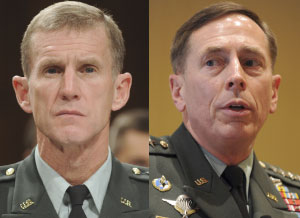 Meanwhile, General McChrystal’s removal seems to have emboldened the Taliban as they see it as evidence of the growing differences among American civil and military leaders due to the faltering war in Afghanistan. Taliban commanders told Newsline that they don’t need to talk to President Karzai or the Americans and their NATO allies as they were winning the war. Referring to the terms put up by the US and by the Consultative Peace Jirga while offering to talk to the Taliban and other opposition groups, the Taliban commanders argued that conditions could only be imposed by those having an upper hand in the war.

In the case of Afghanistan, they pointed out that the US-led coalition forces weren’t winning and thus it was strange for them to insist that the Taliban accept certain conditions such as laying down arms, renouncing militancy and ending links with Al-Qaeda. Instead, they said the Taliban as a strong and undefeated resistance group was justified in making talks and political solutions conditional upon the withdrawal of all foreign troops.

The Taliban commanders maintained that no peace or power-sharing talks were taking place with the Karzai government or the foreigners at this stage and none were planned in the near future. They also rubbished media reports that the Haqqani Network was negotiating with President Karzai through mediation by Pakistan‘s military authorities.

It is obvious that the Taliban stance has hardened in recent months as they increase the number of their attacks this summer and inflict more losses on foreign and Afghan forces. June 2010 has already been the deadliest month for foreign forces since the US invasion of Afghanistan in October 2001 with 101 soldiers getting killed. The disarray in the US administration over the direction of the war effort in Afghanistan has also encouraged the Taliban to stiffen their stance and refuse to engage in peace talks.

In fact, there is a stalemate in the battleground in Afghanistan with neither side able to score a decisive victory. But the US and its Nato allies have to take note of public opinion, which is mostly opposed to the deployment of their soldiers in Afghanistan, and take decisions if the human and material costs of the Afghan war continue to escalate. The Taliban, on the other hand, are not only able to sustain losses but can also afford to wait and tire out their enemy. Whichever side shows greater patience is likely to emerge victorious in this long-drawn-out war.