Kyrgyzstan’s internal violence last month saw many Pakistanis trapped in the city of Osh. Most of them were doctors or medical students studying at a university — a fact hitherto unknown to most Pakistanis.

Kyrgyzstan, one of the Central Asian Republics, is prone to internal violence due to the many minorities that reside in Southern Kyrgyzstan. Uzbeks make up 15% of Kyrgyzstan’s 5.5 million population, but being concentrated mostly in the South, they rival the number of ethnic Kyrgyz in the area, who find themselves amidst a struggle for power and property. The violent clashes that erupted between the two groups on June 11 were particularly harsh and lasted for days: property was destroyed, nearly 200 people were killed and as many as 1,900 injured. A state of emergency was declared and soon food shortages resulted. Foreigners were caught in the middle of this ethnic conflict.

But despite Kyrgyzstan’s habit of making negative headlines worldwide every so often, many Pakistani students flock to the country each year in search of an education. Osh, the second largest city after Bishkek, houses a well-reputed medical school that prides itself on quality instruction. “The Medical Institute of Osh State University is listed with WHO (World Health Organisation), and it enables its students to pursue worldwide post-graduate studies, which makes the university a preferred institution for many Pakistanis,” says Mohammad Jahangir, owner of a study-abroad initiative called Greens Education Consultants Pvt. Ltd. Admission to Kyrgyz universities is usually easier than local medical universities in Pakistan, where admission requirements are high and competition is stiff. “The students must clear an exam set by the Pakistan Medical and Dental Council (PMDC) which requires a grade of 60% or more before they are allowed to join these universities. Osh State University will even admit a student at 50%, but that is the condition placed by the PMDC,” says Jahangir.

Additionally, the low exchange rate of Kyrgyz currency and relatively cheaper fee structures of its universities makes it a viable option for many families seeking alternative education but cannot necessarily afford top universities abroad. A local newspaper reported that the annual fee for the engineering and medical programmes in Kyrgyzstan is approximately Rs. 400,000, which is far cheaper than the fees of other foreign universities and even some Pakistani ones. In comparison, China — which used to be a popular study destination with Pakistanis in the past — demands a fee that is nearly thrice that amount if not more. “Not only is Kyrgyzstan an inexpensive place to study, but students find no problem finding accomodation and halal food is easily available everywhere,” says Jahangir. “Due to many of these factors, China has seen less Pakistani students seeking admissions in the last two years. The trend has shifted towards Kyrgyzstan instead.”

However, the recent riots may result in a change in that trend. Kyrgyz elections have been announced for October, but till then, the Uzbek-supported interim government is bound to cause more bloodshed and protests. In the meanwhile, Pakistani students are worried about the completion of their education. Many of them had already returned home for summer holidays but, those that were in their final year or had pending examinations were caught in the ethnic strife. Reports indicate that a total of 1,200 students are currently enrolled in universities in Kyrgyzstan, of which approximately 300 were in Osh at the time of the violent outbreak. The Pakistani embassy in Bishkek took immediate measures to evacuate students who were stranded, without food or water, and hid from the violence outside in their hostels. Foreign Minister Shah Mahmood Qureshi ordered for the students to be transported to the safe city of Bishkek, where the Pakistan government arranged for two C-130 aircrafts to transport the stranded students back home. Furthermore, each plane carried seven tonnes of food and supplies to aid the violence-stricken country.

Of the students that returned, 18 hailed from Sialkot, 15 from Peshawar, 12 from Gujranwala, nine each from Mardan and Multan, eight each from Gujrat and Lahore, six each from Karachi and Swat, five each from Chaman and Islamabad, three each from Faisalabad and Rawalpindi, and the rest belonged to Nawabshah, Dera Ghazi Khan, Attock, and other cities.

But while these students were able to survive the ordeal and return home, Ali Raza, a final-year student of engineering at Osh State University, was not so lucky. Raza, hailing from Toba Tek Singh district, was hit by a stray bullet on his way home from university, and although many sources speculated that it may have been a discriminatory killing, witnesses clarified that it seemed purely accidental.

On June 15, both aircrafts returned to Pakistan carrying over 250 students and the body of Ali Raza. Gracious parents received their children with hugs and tears and only praise for the government’s efforts were sounded that day. Officials including Shah Mehmood Qureshi and NDMA chairman General Nadeem Ahmed received the traumatised Pakistanis at Chaklala Air Base in Rawalpindi. Among those who landed in Pakistan that day were several Kyrgyz nationals too — those married to Pakistanis who chose to stay in the country after completing their education. Special arrangments were made at Chaklala airbase to process the immigration of these foreign spouses. 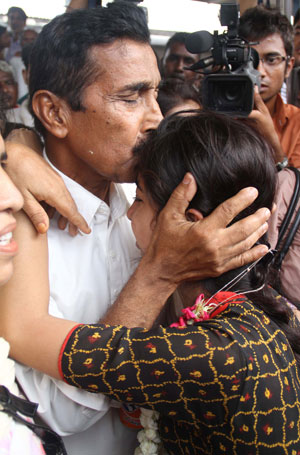 Reunited: After coming home on military aircraft, many students had emotional reunions with their families.

Soon after their return, the students started to express their concern over what would become of their remaining education. “On June 22, our ambassadors met with the Ministry of Education and the Minister of Foreign Affairs with regards to the immediate future of the students’,” says Foreign Office spokesperson, Abdul Basit, “and now we are waiting for a reponse to the proposals.” While most students were in their first, second or third year, there were also some final year students who could not give their final exams before leaving the country. “We are trying to work out the details of the next steps for these students. The question is whether they should be able to give their exams locally, or whether they should give the exams when they go back,” says Basit. Additionally, the government is also working towards providing the remaining students the option of completing their education in Pakistani universities. Basit thinks “the majority of female students may opt not to go back to that city. There have been ethnic issues before and the situation can spin out of control once again. So they may want to be transferred to Bishkek or even to Pakistan. The Prime Minister has already given instructions to the Higher Education Commission (HEC) to see what can be done about this,” says Basit. However, judging by several interviews with these student in the media, it seems that some are still keen on returning to Kyrgyzstan to attain their doctorate degrees, once the violence has dissipated. “In that case, it is our job to evaluate the political and ground situation before we give them the green-light. If somebody consults us in this regard, it is our responsibility to give them an accurate picture,” explains Basit.

At the moment, it is probably still too soon for anybody to judge the situation objectively. The problem is that although elections are around the corner, the university resumes in September for a new semester, and many students will have to lose out on a few classes even if they decide to return. When asked about what the implications might be for prospective students for next year, Basit says, “Of course less students will opt to go to Osh from now on. They would prefer to go to Bishkek where there are less Uzbeks and more Kyrgyz, and hence less ethnic tension.”

This article appeared in the July 2010 issue of Newsline under the headline “Degrees in Danger.”