Zahid Ali is still in disbelief. He breaks down and sobs inconsolably. He is unable to accept the fact that his two sons are dead. Murdered because of their religious belief.

Twenty-two-year-old Hassan Zahid and his younger brother, Hussain Ali, were among the 12 Shia mourners who were killed in Karachi on February 5, when a roadside bomb ripped through a bus carrying passengers to a Moharram congregation.

Hours later, a second bomb exploded at the Jinnah Postgraduate Medical Centre where the injured were being treated. Another 13 people, including family members of the injured, were killed in an act aimed at inciting sectarian hatred and violence across the city.

“What was the fault of my boys? They had no affiliation with any sectarian outfit or political party,” says Ali, who has a small-time job at a printing press. “They were college students planning to do their M.Com.”

Outside his small house, in this congested part of Malir Town, hangs a banner carrying pictures of the two boys. A few feet away there is another house with a poster of another victim.

Not a single home in the narrow alleys of Saudabad was spared by the terrorist attack on the bus. A father, a husband, a brother, a son or a friend — every household lost someone or the other that day.

Grief was soon overcome by frustration over the failure of the police to apprehend the culprits. Now it has been replaced by anger.

“Young men knock at my door every day with requests that I get them licenses for carrying weapons,” says a local Shia representative. “It is becoming increasingly difficult to reason with them.”

The February 5 attack came just weeks after the deadly bomb explosions targeting a procession of Shia mourners in December 2009 that left more than 50 people dead.

Shias and Sunnis have lived side-by-side for decades. They have shared neighbourhoods, celebrated religious festivals together, and intermarriages among them are not uncommon. But the recurring spate of sectarian killings is worrying.

Since January this year, as many as 14 Shias have been killed in Karachi and several Sunnis killed in retaliation. The two sects are often provoked against each other — not by any foreign force, but by people from within. Alongside M.A. Jinnah Road, the busiest thoroughfare of Karachi, sacrilegious graffiti is common on the walls. 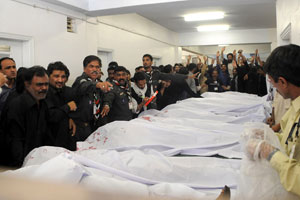 Maulana Nasir Taqvi, the provincial secretary of the Shia Ulema Council, says that the friction between Shias and Sunnis goes back to the days when Prophet Muhammad (PBUH) passed away.

“However, this debate is purely academic. It has nothing to do with how one goes about one’s daily life,” he says. “We believe in Imamat and the Sunnis in Khilafat. This is the only basic difference.” But he vehemently denies that any confrontation exists between the two major sects of Islam. He points out to the formation of Muttahida Majlis-e-Amal, which had representation from all schools of thought. But, he agrees there are people who get carried away by their staunch religiosity and preach hatred.

“It is the responsibility of the government to check what is being ingrained in students in religious institutions,” Taqvi says. “Every time something happens, authorities are quick to blame the Taliban. How many terrorists have been caught? How many of them have been tried and punished?”

He maintains that all state institutions should come down hard on whoever violates the constitution. “Under the constitution, Shias are Muslims. We are not infidels. Anyone who says this and kills us for this reason is a criminal and must be punished.”

Ihsanullah Farooqi, a member of Ahle Sunnat Wal Jamaat, which was formed after the Sipah-e-Sahaba Pakistan (SSP) was banned, says there is nothing new about different sects holding conflicting views. “The problem arises when hate literature is used to hurt someone’s beliefs,” he says. “For us, the definition of a Muslim is clear: one who believes in Allah, the Prophet Muhammad (PBUH) and His companions — the Sahaba (RA).”

“The outlawed Sipah-e-Sahaba also had violent people in its ranks. But they broke away from us and formed the Lashkar-e-Jhangvi,” says Farooqi, stressing that the Jamaat condemns killings on sectarian grounds.

But he insists that the government has to counter negative propaganda against the companions of Prophet Muhammad (PBUH). “There are dozens of books available in the market that make offensive remarks against His companions.”

He contends that more than 40 activists of the Jamaat have been killed between November 2008 and June 2010, and blames Sipah-e-Mohammad, the outlawed Shia militant group, for these killings.

Successive governments have formed committees, comprising scholars from both sects, to iron out the differences between them, but the process was never completed for one reason or another, he says.

Other than the committees formed by the government and a few conferences held every now and then, there is hardly any initiative taken by the state to promote religious tolerance.

According to a survey by the Human Rights Commission of Pakistan, there is no concept of encouraging inter-faith harmony in public schools. Unskilled teachers and outdated curriculum often extol militancy in the name of religion, it says.

Iqbal Haider, a human rights activist, says undue promotion of religious seminaries as a substitute for secular education is, in part, responsible for the growing sectarianism.

“We have heard of the Punjab government giving away grants to madrassas but they never have enough funds to allocate for school reforms,” he says. “The radicalisation of society that began in the days of General Zia-ul-Haq never stopped.”

Pakistan’s ruling elite has always found it feasible to maintain its links with extremists, he says. “Politicians, generals and opinion-makers never hesitate to pray behind an Imam, who holds extremist views. This attitude of the leaders has filtered down to the masses as well.”

He points out to the fact that Maulana Azam Tariq, the founding member of the banned Sipah-e-Sahaba, shockingly enough was allowed to contest elections by the former president, Musharraf, who launched the crackdown against sectarian and extremist outfits. 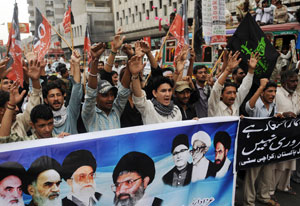 Society turns moderate or religious depending on the policies being pursued by the rulers, says Haider. “It is high time we acknowledged that religious intolerance does exist. Remember, we have not lost major generals and brigadiers in the past wars with India. But they are being killed here, in our own country, by these militants now.”

The performance of the security agencies, including the police, in apprehending the culprits has remained questionable. Unfortunately, even the victims’ families and witnesses hardly come forward to demand justice, mainly due to the fear of being harmed. For instance, none of the families who lost their loved ones in the February attack on the Shia convoy have tried to pursue cases in a court of law.

Just two weeks back, Jundallah rescued three of their accomplices from the city courts in Karachi in broad daylight, using hand grenades and automatic weapons. They were accused of being involved in December’s Ashura blast.

Waseem Ahmed, the capital city police officer, says that the police had made headway in capturing the terrorists but there were multiple issues frustrating its performance.

“When we had captured the Jundallah men, the media was blaming us for implicating the wrong people in order to save face. Now you know that we had actually captured dangerous militants.”

Ahmed feels that there is desperate need to improve the investigation skills of the police force and equip them with modern tools. “It is true that the police often fails to prepare a foolproof case against the accused and encounters problems in convincing witnesses to come forward.”

The government, he believes, also needs to improve the legal system, including the composition of the prosecution, which includes some of the most inefficient lawyers. Moreover, “Our courts are too liberal [in dealing with criminals],” Ahmed says. “Something needs to be done about that as well.”