“Why always portray women as wimps? They have other facets”
– Savera Nadeem

Most people view Savera Nadeem as a leftist activist. It probably has to do with her appearance: Khaddi clothes, large cloth satchel and a bohemian lifestyle. Or maybe it has to do with her early association with her father Shahid Nadeem’s theatre group Ajoka known for its hard-hitting satirical plays (including Burqavaganza) that have angered the powers-that-be.

An actor of repute, Savera has to her credit television serials such as Inkaar, Sawan, Mohabbat Ka Ek Pehar, Shikwah and the more recent Diya Jale that she says has been a “mega, mega success.” But she is tired of being typecast and feels her true potential as an actress has not been explored. She has produced and directed plays as well, but for the past one year, she has been hosting a morning show on News1.

A voracious reader and big on adventure sports, especially scuba diving, Savera has recently acquired a new hobby that has earned her the nickname “Savera technology.” She explains: “From being a total theatre walli, with my samosa and chai sprawled on the floor, I now walk onto a set with my laptop, dvd, ipod — and I’m always skyping.”

Newsline interviewed this talented actor and anchor person about whom very little is known, despite her long innings with television.

Q: Let’s start with your breakfast show on News1. How difficult is it to do a daily morning show?

A: Seema Tahir had approached me for the TV1 morning show, ‘She, on I’ quite a while ago, but I had turned it down then because people close to me felt I would not be able to sustain it for more than a month. Also, my acting assignments would suffer because I would be too tired to do anything else. Besides, I didn’t want to talk about khana pakana or project an aunty-like image of myself. But now that I am finally doing it, what appeals to me is that it’s a current affairs show and I am sending out a more informed and intelligent image of myself to people. Plus, it has brought a certain discipline to my life because I have to follow a regular schedule!

I have learnt so much since I started last July. My producer had told me that in three months you will be the most well-informed person in this field, and he was so right. I would not have believed it then, because I was reading everything off the teleprompter — even the prime minister’s name! And now I feel so competent when I am questioning all the analysts and experts who appear on my show. It feels so different from going on the set of a serial every day and repeating the same lines again and again — “Tum kehna kiya chahtay ho, mein barbaad ho gayee, merti talaq ho gayee” — and shedding copious tears with glycerine. I was sick of it all — projecting an image that does not represent the real me.

A: The fault lies with the people who are in the business. They are not creating strong roles for women, so typecasting is very rampant in the industry. If you do a certain role well, you are stuck with it for life. So now I end up either as a very strong, aggressive woman, or somebody who is very weepy and poor — the typical victim. Women have other facets to their lives too. Why always portray them as wimps? Subliminally, you are giving viewers the message that there are only two types of women out there: the shrews or the doormats. I don’t want to portray either of those two images. I want to do something between these two extremes. 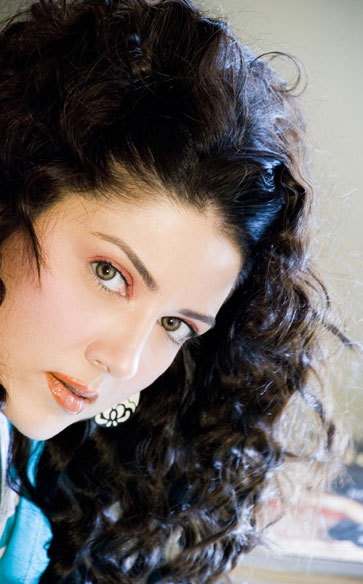 Q: But even the hit Diya Jale, your most recent serial, portrayed you as a much-abused wife?

A: Towards the end, the abused wife walks out on her husband. I think the writer’s feminist urge woke up towards the serial’s climax and it had a decent end.

Q: How do you choose your assignments?

A: At one time it used to be the character and script. Now I have ‘nakhra’ — at least that’s what people term it. I have started to look at the team, the location, the arrangements, etc. Every single thing affects my performance — a crowd of 500 gawking at the cast while the shooting is in progress; actors who are rude, sleazy or constantly cussing; inept producers who don’t know their job; shooting in a place where the environment stinks — all of this irritates me. I cannot fake my emotions. If I am feeling disagreeable, it shows on my face.

Q: If you were to choose between anchoring and acting?

A: Drama doesn’t excite me anymore. Reality is so much more interesting. I want to be a more well-informed citizen. When one focuses on drama or any specific field, you switch off from what is happening around you. Actors have a tendency to disregard the world and do not think of it as being important enough as themselves.

Q: Are you acting in any serials at the moment?

A: Angeline Malik is directing a series for Hum Tv called Woh Chaar that is being produced by Maria Wasti. It stars Ayesha Omar, Maria, Angeline and myself. Our characters change after every four episodes, and each episode is dedicated to one character. It is something that has never been done before locally.

Q: Whatever happened to the activist in you?

A: I was never a die-hard activist. I have a lot of beliefs and convictions, but I am not so militant about them. I much prefer the zen-like state of calmness. While it is true that like my father I am extremely hot-tempered and impatient, I really aspire to get rid of my temper tantrums because that can send out a very negative image of you. I have even started to do yoga now.

Q: You are the only actor in the family. Why is that so?

A: My brother has a lot of potential. He is very good-looking, dances well and has the looks of a hero, but I was more out there and uninhibited. Moreover, I got so much love and nurturing from everyone, that I developed the confidence to feel I could accomplish anything.

Q: An actor once said, ‘I am not happy being myself and that is why I take upon roles of other people.’ Can you identify with that?

A: It is true to an extent, but I am not uncomfortable with myself. I quite like being me. I would say [through acting] you live another version of yourself. 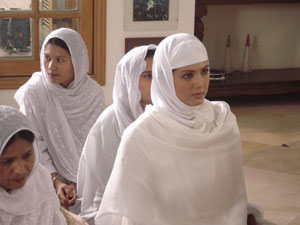 Q: Do you miss theatre?

A: Yes, more so when I watch a good production — especially when the cast is taking their curtain call and you look at the audiences who are so engrossed, and no one is switching channels. I miss that aspect of theatre — it was magic. The medium of TV doesn’t allow you that kind of liberty because there are far too many people involved — the director, producer, cameraman, sound person etc.

Q: On another note, why is an attractive woman like you still single? Does the idea of marriage intimidate you?

A: Actually, it does. It’s a huge commitment and implies change, especially for a woman. She always has to give up so much more. That thought scares me.