Pop singer Ali Zafar makes his debut as an actor in the much-anticipated Bollywood flick, Tere Bin Laden, scheduled for release on July 16.

Zafar’s role is that of a desperate, young, Pakistani journalist who concocts an interview with an Osama Bin Laden look-alike in a bid to secure a green card to the US.

Zafar is in India for the promotion of Tere Bin Laden and took time off his busy schedule to speak toNewsline about his debut film, its USP, and his expectations from it.

Q: Tere Bin Laden is slated for release this month. What are your feelings at this point?

A: The excitement is growing day by day. As you know, this is my first film, and it doesn’t have a big star cast, so a lot depends on me. I don’t want to disappoint the audience or my fans. I’m hoping for the best.

Q: What’s the promotion of the film been like in India?

A: It has been an interesting experience. One gets to witness completely different perspectives to certain things and also has the opportunity to improve the quality of that perception. For instance, the Indian press is all about creating and sensationalising the news — it’s very Bollywood-oriented.

Q: What has the response of the Indian public been vis-Ã -vis the promotion of the movie?

A: They’re keenly waiting for it since the subject is pretty original.

Q: How long did it take to complete the movie?

A: It’s been almost two years since we started working on the movie. A film does take up a lot of time and effort so I just hope it was well worth it, and the audiences go watch it.

Q: A picture of you with Salman Khan has been circulating on the Internet like crazy. Is Salman part of the movie or is he just showing his support for Tere Bin Laden?

A: No, Salman is not in the movie. He just liked the movie a lot and praised my work in the film. He told me that he thinks it’s going to be a sure-shot hit. He also put up our pictures on his Twitter account. 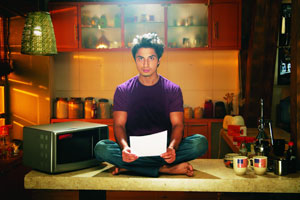 Q: Do you think the movie will go down well with Pakistani audiences?

A: I think people in Pakistan will love the movie and my role in it. It’s a movie about Pakistan and, through my character, it depicts how Muslims, especially Pakistanis, have to face rejection and discrimination by the US and the rest of the world. Tere Bin Laden also makes fun of Bush’s ‘war on terror’ policies, which many Americans themselves condemn.

Q: You were asked to perform at Indian Idol this month. From what was telecast in Pakistan, you were not even given a proper introduction at the show and your performance was deleted. What exactly happened?

A: Portions were edited out because of the controversy about the Pakistani comedian, Shakeel. But our main focus was to launch the music of Tere Bin Laden on a big platform which was achieved. They did introduce me as the ‘Prince of Pop’ on the TV version but I think the clip on Youtube doesn’t include that. It’s all good.

Q: Considering the situation in Pakistan does it not worry you that some may perceive the movie in a different light and react negatively to it?

A: This movie comes with a message of peace. It’s the voice of every Pakistani. It is not meant to offend anyone or anyone’s ideology. It’s just a satire on what we see every day and don’t want to see.

Q: One understands that Tere Bin Laden is a comedy, yet, the issue that the movie subliminally raises is the fact that Osama Bin Laden is yet to be found. As an artist, what is your take on raising important social, political and economic issues through the medium of art?

A: This movie does not raise the issue of Osama not being found. Tere Bin Laden just comments on the irony of the situation. As an artist, I feel it is my responsibility to deliver more than just sheer entertainment. Humour is a great tool to communicate a serious thought, and this is what the movie does. I have been given so much by this country and its people that I need to give back from time to time. If I am in a position to change things, why should I only think of myself.

Q: If Laden had a couple of Bollywood type dances, would you have still done the movie?

A: Anything done tastefully and in an entertaining manner would pass muster.

Q: This movie may open the doors to Bollywood for you. Would you take up acting or would your focus primarily be singing?

A: It really depends on the nature of projects being offered. I have not taken up a Bollywood film in the past just for the sake of doing a Bollywood film, and I wouldn’t do that in the future. The script and the people working on the project matter to me a lot. As for music, I’ll never ignore it — it’s my lifeline. I will not let my music take a backseat, which is why my third album Jhoom will be released on Eid.

Q: You backed out of Shoaib Mansoor’s Khuda Kay Liye due to time constraints. Would you consider acting in a Pakistani movie?

A: I do plan to play a part in changing our local industry in the coming years but I need time and support for that. I will have to fight against all odds and work under the displeasure of a lot of people from the fraternity. It has taken years to destroy the industry, it will take years to rebuild it and one man can’t do it alone. New people will need to jump in. To make a good film, the first thing you need is a lot of passion and commitment. Everything else follows.