The secret or not-so-secret trips by the Saudi royal family do not make headlines, but a recent one, in which Pakistan’s federal government was given US $1.5 billion as a “gift,” did — and for many days. No one believes the story of this being a free lunch. Most people are convinced that Riyadh would expect something in return, such as providing support to Saudi policy in Syria and allowing proxies to fight there. Strengthening ties with Pakistan may also be an attempt to weaken Islamabad’s links with Tehran, which had developed during the Pakistan People’s Party (PPP)’s tenure.

The PPP government, led by Asif Ali Zardari from 2008-2013, is perhaps the only significant phase in Pakistan’s history in which relations between Saudi Arabia and Pakistan were strained. According to Wikileaks, a 2009 cable revealed that the Saudi King Abdullah described Zardari as “the rotten head that was infecting the whole body”. Other cables suggested that Riyadh was keen for Pakistan’s military to replace the political government. Such anguish was possibly because of Islamabad’s overtures to Iran. Furthermore, there were rumours of the Zardari-led PPP government trying to discourage contacts between the Saudi diplomatic mission in Islamabad and various militant groups. During a meeting around 2009, the then interior minister had said that the Saudi ambassador was sent off (not declared persona non grata) to Riyadh as he was caught giving money to a militant leader. Despite Zardari’s several visits to the Kingdom, the situation was not as warm as expected.

Although the PPP government ultimately failed to curb militancy as it had little control over its mechanics, the above-cited incident is a significant indication of the role that the Saudi intelligence and government, in general, played in Pakistan. The links between various Deobandi and Salafi militant groups and Saudi Arabia date back to the late 1970s and early 1980s. Reportedly, a number of militant outfits, including the Sipah-e-Sahaba Pakistan (SSP) established in the early ’80s and Lashkar-e-Taiba (LeT) set up later in the 1990s, received Saudi funding. But this was not the only source of funding for terrorist organisations.

Money came from other Arab states as well such as Libya, Qatar and the United Arab Emirates (UAE). Some Gulf States have permanent bases in South Punjab, which are used for both hunting and making contacts with various stakeholders that include the militants. Over the years, there was an increase in both financing and sources of terror. The ’80s and the ’90s saw a steady flow of Saudi nationals, who came to Afghanistan via Pakistan to initially fight against the former Soviet Union and then establish the Islamic emirate in Afghanistan led by Mullah Omar. Many militants from South Punjab claim to have seen Arab nationals in Afghanistan and later in training camps in Pakistan’s Northern Areas such as Mansehra. Osama bin Laden represents a trend in Arab militancy that found safe havens in South Asia. Bin Laden also helped establish numerous militant outfits such as Jaish-e-Mohammad (JeM), which was partly financed by Al Qaeda. 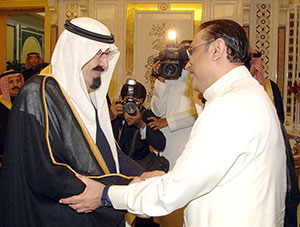 The Arab influence in Pakistan’s society and state seems to have gradually and systematically grown. However, the first glimpse of such influence dates back to the end of the ’70s, as a result of the proliferation of Pakistani manpower going to the Middle East. It was not only money which returned with these people, but social influence as well. Later, the cooperation between the states to fight the war in Afghanistan bolstered the Arab influence. The manifestation of the social impact is visible in the form of Al-Bakistan and Al-Bunjab car registration plates that are now seen more commonly in Pakistan.

Such influence might have not grown so fast had it not been for the relationship between the two states and its critical institutions. Although the ISPR was wary of giving figures for the number of soldiers and officers that go to Saudi Arabia to fight, former military personnel talk about the times when a division strength was dispatched to the Kingdom. Pakistani armed forces have been going to serve the Saudi monarchs since the time of General Ayub Khan. In fact, old officers narrate an incident when the Saudi government returned Ahmadiyya officers from Pakistan, when they found out about their faith. People still talk about the Pakistani contingent that had assisted the Saudis in 1979, at the time of an attempted internal takeover of the Kaaba by a group of Salafi rebels. In fact, the popular myth is that one of the reasons that the Saudi monarchs would not let any harm come to Pervez Musharraf is because he was leading the Pakistani contingent then. Incidentally, Pakistan’s role in the 1979 operation is over-emphasised. The Saudis had also sought help from western intelligence and their military.

The military’s presence in the Kingdom is not limited to the army. Ostensibly, there is almost a tradition to send a senior naval officer as ambassador to Saudi Arabia. The military cooperation, however, is more of a one-way traffic in which a lot depends on Riyadh’s desire. The recent agreement to enhance defence cooperation indicates a possible increase in arms purchases that will be limited to small and light weapons or equipment mainly manufactured at the Pakistan Ordnance Factories, Wah. The Saudis and even other Arab states have never shown any keen interest in major weapons systems like submarines, gun and missile boats or fighter aircrafts that Pakistan assembles. This is mainly because of the fact that the Saudis and other Arab states have a traditional dependency on western equipment and would rather purchase from the original equipment manufacturer (OEM) than Pakistan, which has limited control over the supply chain used for making major weapon systems. Most Arab countries with which Pakistan has defence ties prefer to procure trained military manpower. Another example of such preference was in the form of recruitment of retired military personnel in 2011 for dispatch to Bahrain. These men, hired by the military’s private foundations, were sent to Bahrain to curb the Shia insurgency.

Contrary to what we would imagine that this is about Arab dependency on Pakistan, it is the latter that may be dependent on the former because of money earned through the process. Keeping a large standing military busy, especially when the age of conventional wars is virtually over, is quite a task. Pakistan sends about 10,000 military personnel annually on UN missions. This is in addition to those dispatched to Saudi Arabia and other Arab states. The arrangement is beneficial both for the armed forces and the individual as part of the salary is retained by the military. Given the possibility of a reduction in the UN’s requirement for peace-keeping missions, the Arab states will become important for Pakistan’s military as a lucrative posting for its personnel. Furthermore, the US$ 1.5 billion and more money that may be contributed by other Arab states is welcomed by the military as a source of financing that will keep the organisation afloat. Though the Pakistan military is never short of funds, it has not had major modernisation since the 1980s. It needs equipment for which money is essential. 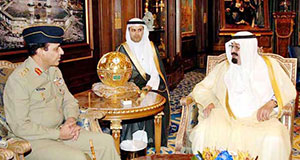 The government of the PML-N probably shares this perspective. Given the dearth of resources, the inability to raise money through taxes and the pressure of numerous problems such as electricity shortages, the Sharif government would be happy to see an increase in its money supply. The news that these funds were given as a “gift” may not be taken lightly as Sharif is considered close to Riyadh’s heart. Not only does the Saudi royalty view him as “their man in Pakistan,” they have good memories of the Pakistani prime minister. The Saudi crown prince was the only foreign dignitary who was taken on a trip to Pakistan’s nuclear facilities after the atomic tests in 1998. This adventure also indicates that the political government in Islamabad and GHQ, Rawalpindi may be on the same page as far as Saudi Arabia is concerned.

Leaders of the present government have not just spent a considerable amount of time in Saudi Arabia, they also have financial investments in the country and financial connections with the Saudis. In fact, both the Bhutto and Sharif regimes had contacts in the Arab world. While the Sharifs have their eggs in the Saudi basket, the Benazir Bhutto family has links in the UAE, where her family has its primary base. Many amongst Pakistan’s elite launder their money through Arab countries of the Gulf and Saudi Arabia. It is rumoured that the Sharif government plans to repay the Saudis through initiating some old plans such as leasing out agricultural land in the desert of Cholistan.

The Saudi/Arab-Pakistani connection has come under some criticism. However, a question worth asking: Can the elite of Pakistan afford to say ‘no’ to the ‘freebies’ from Saudi Arabia and other Arab countries? Given the country’s economic scenario, we continue to look outside for resources. The Arab money may appear ‘dirty’ to some, but this may well be a possible replacement for the American funding that is likely to be reduced as US and NATO forces pull out of Afghanistan.

This article was originally published in Newsline’s April 2014 issue as part of the cover story.