It must be a sign that the times they are a-changing if L.K. Advani, the man who was once considered the hardline face of Indian politics because of his role in provoking the destruction of the Babri Masjid in Ayodhya in 1992, is now considered a moderate, centre-right figure who must be pitied rather than scorned because of the manner in which he has been upstaged by his own party, the Bharatiya Janata Party (BJP) and its prime ministerial candidate, Narendra Modi.

The story of the 2014 elections that will take place over April and May — nine phases from April 7 to May 12, with results out on May 16 — is the story of the largest democratic exercise in the world, and certainly, the statistics are awesome. As many as 800 million people will cast their vote over five weeks, across a country that is as vast as it is heterogenous. There are 543 seats at stake in a 545-member Lok Sabha or House of the People (two seats are nominated), which means that in the first past-the-post system that India has adopted from the British, the first party to win a majority of 272 seats will have the right to sit on the throne of Delhi.

Remember, though, that out of 543 seats, 47 are reserved for tribal candidates in states like Jharkhand and Madhya Pradesh, which have large tribal populations, while 84 seats are reserved for ‘scheduled caste’ or Dalit candidates, especially in states like Uttar Pradesh and Bihar. There are no quotas for women, despite a massive push in favour of such legislation in recent years. For 412 seats, the contest is wide open. Let the bugles blow. 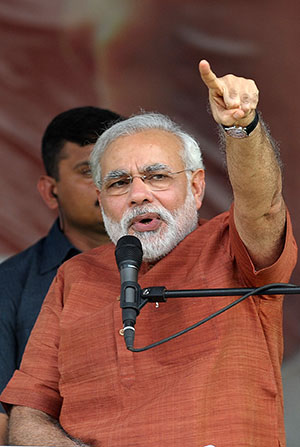 It is said that as much as $6 billion is in the fray, only second to the money that is spent in a US presidential election — for a country as poor as India, this is certainly a mind-boggling figure. Major leaders are charting helicopters in an attempt to campaign across the country, costing between Rs 55,000 and two lakhrupees per hour. The Election Commission allows every candidate to spend Rs 16 lakhs on his/her election, but it is an open secret that many times that amount is actually disbursed. In the 2009 election, candidates in the Punjab spent anywhere between five to eight crore rupees per seat. It is said that the BJP and the Congress have each targeted a budget of Rs 500 crores for each of their campaigns.

With the stakes so high, both campaigns have been equally high-decibel. The BJP is focusing on Modi’s decisive, determined and resolute nature, contrasting it with the doubtful, vacillating and waffling public image of Prime Minister Manmohan Singh. In contrast, the Congress is hoping that its rights-based approach to politics and governance, as exemplified by legislations mandating the Right to Information, food security, guaranteed work of 100 days per adult per year, etc., will push it over the Rubicon.

The BJP is consciously inserting into its campaign the imagery of a man who came up the hard way, by sellingchai on trains that passed through Vadnagar, in Gujarat’s Mehsana district where he grew up, contrasting it to the golden-spoon-in-the-mouth upbringing of Congress leader Rahul Gandhi.

“Shehzaade!” Modi has mockingly called Rahul over the last few weeks, and large swathes of the public have silently nodded approval. What goes against the young-ish Mr Gandhi is not only the fact that he has been in politics for 10 years but also that his mother, Congress President Sonia Gandhi, has handed over the party’s baton to her son as if the 129-year-old party were a private limited company. It’s called ‘putramoh’ in Hindi, ‘the love of the son,’ an overwhelming feeling that is suffused in the subconscious of most north Indians, never mind that Sonia herself is Italian and this is the 21st century.

For the past several months as Modi has traversed the length and breadth of India, he has spoken of the need to return India to its uniquely destined path, and become the ‘sone ki chiriya’ or ‘golden bird’ that it once was in some hoary past. He has declined to be interviewed — unlike Rahul Gandhi — and never answered a direct question on his own alleged culpability or role in the Gujarat riots of 2002. Each time he has restricted his answer to the “pain” that he felt at the fact that scores of Hindus and Muslims were killed in the communal conflagration that broke out in the eye-for-an-eye rioting that swept Gujarat after 56 Hindu pilgrims were burnt alive in a train coach in February 2002. 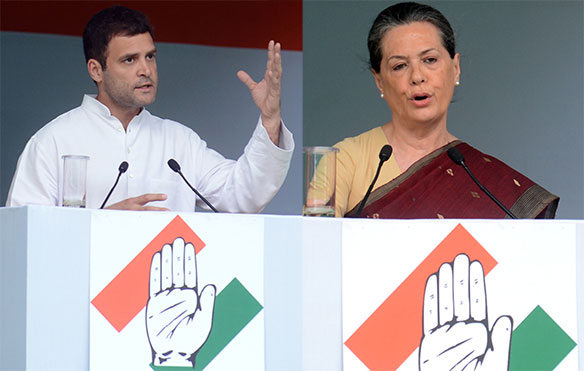 Indeed, Modi has kept his campaign above the communal fray — refusing to be baited by journalists on the Hindu vs Muslim question — until a rally in Jammu in March-end, when he could not resist targeting Pakistan, barely a few score kilometres away on a crow’s flight path. It seemed that the tiger, who had deliberately camouflaged his stripes in the jungle of power and politics these recent months, could not hide himself any longer.

“Three AKs have emerged as a unique strength for Pakistan. The first is the AK-47 that has caused such bloodshed in Kashmir. The second is (Congress leader and outgoing defence minister) A.K. Antony who told Parliament that people wearing the Pakistan Army uniform beheaded our soldiers while our army had said that the Pakistan Army regulars had carried out the killings… and the third is AK 49, who has just launched a new party,” Modi roared, referring to Arvind Kejriwal’s initials and the number of days he had been chief minister of Delhi, but never mentioning him by name.

Certainly, it was no coincidence that only the day before, Kejriwal had announced in front of a grand rally in Varanasi that he would be contesting against Narendra Modi. Undoubtedly, the election campaign has been electrified.

Arvind Kejriwal, virtually a pretender to the throne, is threatening to upset the well-calculated plans laid out by Narendra Modi & Co. (Delhi’s seven seats are still expected to attract a large number of the urban poor, but it is clear that the educated middle-class has had enough of Kejriwal’s antics, which have included sleeping on the footpath in Delhi). Kejriwal realises he has little to lose and everything to gain by targeting Modi’s overweening ambition, and so he is going for his political jugular. Equally interesting is the candidature of one of Uttar Pradesh’s best known gangster turned politician, Mukhtar Ansari — no matter that he is in jail, accused for the murder of a fellow politician more than a decade ago — from Varanasi. As for the Congress, it has succeeded in marginalising itself in recent months, not even declaring a candidate for Varanasi yet. 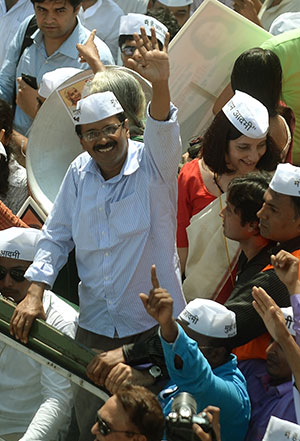 No matter. The world is descending on Varanasi these days. Hinduism’s most important city, and certainly the oldest living city in the world, has become a riveting spectacle, as God-men smeared in ash and dressed in saffron compete for attention with politicians of every hue. Of the 15 lakh-odd population in the constituency, it is important to remember that Muslims, mostly artisans who weave the famous Banarasi silk on their age-old looms — although several are said to be migrating to Saudi Arabia and sundry Gulf countries in search of better jobs — make up about 25 per cent of the population, as large as the Vaishya or intermediate caste community to which Kejriwal belongs. As for the Dalits, they are expected to vote for Behen Mayawati’s Bahujan Samaj Party, which is in direct competition with the backward caste party of Mulayam Singh Yadav, a man who has so sought to identify himself with Uttar Pradesh’s minority Muslims that he is fondly known as ‘Maulana Mulayam.’

If that caste conundrum is not complicated enough, there is another question: Which way will the so-called Muslim vote swing? The short answer is that, at least in north India, Muslims are expected to strategically vote in favour of the candidate that can best defeat Narendra Modi. It used to be much simpler in the bad old days, when L K Advani polarised the Hindu vs Muslim vote over the Babri Masjid and the campaign to build a temple to the Hindu god Ram on its ruins. At the time, in 1992, ‘Maulana Mulayam’ was seen as the good guy who tried to stop the Babri Masjid from being brought down; ironically, in 2014, the Muslims are turning away from Mulayam because of his party’s inability or incompetence, or both, in bringing those affected in the Muzaffarnagar riots (in which a few score Muslims were killed, by rioting as well as by the winter that followed) to justice.

In large parts of India, especially in UP, Bihar and West Bengal, the substantial Muslim vote can make or break an election. In addition, the influence of caste can both neutralise or cement the attractiveness quotient of a candidate. If there is a ‘leher’ or ‘wave’ in favour or against a particular party, as the BJP is claiming there is for Narendra Modi, it must be able to overwhelm all these permutations and combinations in its wake.

So is there a ‘leher’ in favour of Narendra Modi? Since fortune-telling must remain the domain of the fortune-teller, here is my prediction: if the BJP crosses 210 seats on its own, Narendra Modi will be Prime Minister; if it doesn’t, the BJP will still come to power, but the Prime Minister will be another man or woman inside the BJP with the capacity to pull together allies of contradictory strengths.

The fact that the BJP is expected to win power seems like a story foretold. On the other hand, that is exactly what the media had predicted for the BJP in 2004 — only the people of India thought otherwise.

This article was originally published in Newsline’s April 2014 issue under the headline, “The Countdown Begins…”