ArtChowk Gallery was one of the first to herald the arrival of spring with Jamil Afridi’s exhibition, The Garden of Her Memories, which evoked a feeling of loss for the long summer days gone by.

The collection’s eponymous work, ‘The Garden of Her Memories,’ vividly portrays this sense of nostalgia. It depicts a woman lying on her side and thinking of her past: of family, starry nights and playing with children in colourful gardens. Her memories are largely vague, as the people are stick figures and the places are blurs. However, more important than the specifics of the events are the feelings evoked by them — feelings of calmness, safety, warmth and happiness associated with family. But these uplifting things are now lost, gone forever. The woman is alone, a mere outline devoid of colour. That she is looking back makes her essentially an observer rather than a participant in her own life. This feeling comes through in a number of other paintings. Most notable is ‘The Maasi,’ a woman hanging up laundry on the roof of an affluent, suburban house. She is the subtly jarring note in an otherwise peaceful atmosphere of row upon row of buildings and extensive lawns. 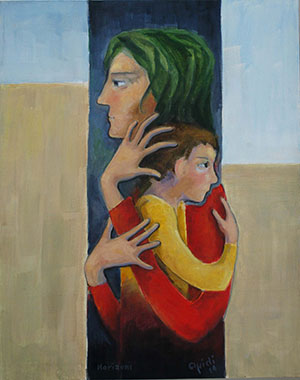 In fact, all the displayed works have a sense of something gone awry. One of the more thought-provoking pieces is ‘Upside Down Power,’ which shows a man doing a handstand on a countryside road. The act, in itself, appears incongruous, given the locale, but the interesting part is that the man’s feet literally touch the sky, casting a shadow on it. The interpretation depends on the viewer’s sense of optimism: Does this mean that the sky is the limit for one’s achievement, or is it that the entire world isn’t big enough to fulfil somebody’s ambition, or that we are always somehow constrained by our surroundings, even though those constraints may not always be obvious?

Afridi’s subjects come alive immediately and effectively convey longing, pain, anger and greed through the postures and hues that he bestows upon them. Their expressions are mostly just half-visible, with one or both of the features of expression — the eyes or the mouth — slightly blurred out. The eyes are usually more prominent than the mouth, suggesting that the most real communication is visual, not verbal. The figures are sometimes naked, sometimes clothed in solid colors and straight lines, drawing attention away from their bodies and onto the mood of the moment.

It seems that the older people get, the more worn-out they look. There is a contrast between an image of carefree boys fishing and swimming near a dirty pond, and the desolate woman staring out at the moon in ‘The Terrace,’ or the men on the brink of a fight, gripping sticks and staring each other down in ‘Clash of Ego.’ Everything decays — the land, the people, or the monuments they raise to their own grandeur, as shown in ‘In the Desert, Mansions’ which depicts a large house built in a Grecian style in the middle of nowhere, with nothing around it but sand and insects. 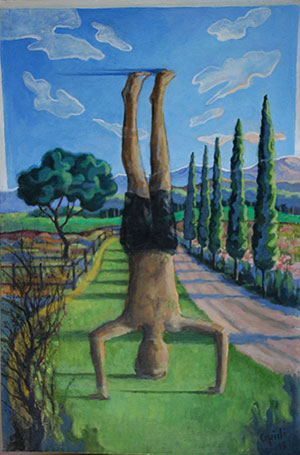 This contrast is most clear in ‘Horizons,’ where a weary mother and child hug and stare into the distance. At first glance, it is merely a depiction of a tender moment, but the real story lies in the background. Both characters stare out at bare empty land and a clear blue sky, but there is a stark difference in their perceptions. For the adult, viewing things from a higher plan, there is much more empty land and less of a bright blue sky, while for the child, who views things from lower down, there is more sky than barren land visible, and hence a greater sense of possibility.

‘Wow!!!‘ gives off a similar vibe of youthful hope and energy. Here, a young man hatches from an egg and into a rainbow of swirling colors, his eyes agape in wonder. His body, however, seems rubbery and infirm, unable to stand on its own. The painting emphasises both the magic and the naivetÃ© of youth.

The artist, in his statements, emphasises the unassuming nature of the work. Rather than dissecting and intellectualising life, Afridi gets to the core of it and communicates feelings that would resonate personally with most viewers, making for a contemplative and enjoyable experience.

This review was originally published in Newsline’s April 2014 issue.