By Mahir Ali | Published 8 years ago

Did Saudi Arabia really feel obliged to bribe Pakistan with US$ 1.5 billion in order to dissuade Islamabad from selling weapons to the Syrian government? Was it a tip for services rendered — or yet to be called upon? Or was the ostensible act of charity intended to distance Pakistan from Iran, whose influence in the region has long been a source of irritation — and fear — for Riyadh?

It isn’t particularly hard to sympathise with the parliamentary opposition’s suspicion that there is more to it than meets the eye. For instance, Pakistani officials have declared that there will be no more arms sales to Syria, while parallel reports suggest that, in fact, the Saudis will supply weapons purchased from Pakistan to Syrian opposition groups via Jordan.

Were that to turn out to be the case, would it really be such a big deal? After all, the history of Islamabad kowtowing to Riyadh goes back a long way. However, it seems the historically warm relationship had somewhat cooled during Asif Ali Zardari’s presidency.

Writing in The Independent last month, Patrick Cockburn quoted the United Arab Emirates’ foreign minister, Abdullah bin Zayed, as telling the Americans that “Saudi Arabia suspects that Zardari is Shia, thus creating Saudi concern of a Shia triangle in the region between Iran, the Maliki government in Iraq, and Pakistan under Zardari.”

That is not particularly hard to believe; nor is Cockburn’s claim that the suspicious Saudis “made clear they would have much preferred a military dictatorship in Pakistan.” With Nawaz Sharif in power, that option has presumably lost its attraction. Sharif obviously feels beholden to Riyadh for prevailing upon Pervez Musharraf to exile him to Saudi Arabia after his government was overthrown in 1999.

Sharif’s sense of obligation makes the US $1.5 billion “gift” all the more intriguing. Surely a stern word from the head of the House of Saud would have sufficed to distance Islamabad from Damascus and even from Tehran — notwithstanding the fact that a cordial relationship with the latter makes strategic sense in both political and economic terms, and there’s much to be said for a relatively neutral approach to the conflict in Syria.

Saudi Arabia, though, is anything but a disinterested party in either of these contexts. In an extraordinary public tantrum last autumn, senior members of the ruling family gave vent in unusually strong terms to their displeasure over the United States’ refusal to directly intervene in Syria and its efforts towards a rapprochement with Iran. Riyadh was, mind you, already mightily miffed by Washington’s reluctant withdrawal of support from Hosni Mubarak, and again by its official lack of enthusiasm for the military coup against Mohamed Morsi.

It is not terribly surprising that when it comes to Iran and Egypt in particular, Saudi Arabia finds itself on essentially the same page as Israel’s Netanyahu regime. Even on Syria, both countries are determined to undermine Bashar Al Assad — although Riyadh would presumably be less alarmed than Tel Aviv were Assad to be displaced by staunchly Sunni elements among the rebel forces.

On the other hand, there is some evidence of efforts by Riyadh to weaken the so-called Al Qaeda affiliates in Syria, notwithstanding their strong Saudi connections. Last month, Saudi Arabia, the United Arab Emirates, Bahrain and Egypt withdrew their ambassadors from Doha; a snub universally interpreted as payback for Qatar’s endorsement of Islamist factions in Syria and its backing for the Muslim Brotherhood in Egypt. Almost simultaneously, Riyadh declared the Brotherhood — which has branches across the Arab world as well as in Turkey — a terrorist organisation.

Both moves were quite remarkable. Qatar is a member of the Gulf Cooperation Council (GCC) in which Saudi Arabia traditionally holds sway. But in recent years, the tiny but phenomenally rich state has been exerting considerable influence in the Middle East using its largesse — and Al Jazeera — to guide the fortunes of nations in the throes of popular uprisings, and doing so independently of Saudi preferences.

Qatar and the Saudis may have been on the same page in Libya and initially even in Syria (although Riyadh has a soft spot for strongmen, it saw Muammar Gaddafi as too unpredictable a maverick, and in the case of Assad, its sectarian predilections inevitably came to the fore), the kingdom saw Doha’s support for Egypt’s Muslim Brotherhood as an unforgivable error — and evidently was unable to persuade the Al Thani clan to change course.

The Saudi irritation with the Ikhwan (Brothers) goes back a century. This Wahhabi outfit was co-opted by Abdul Aziz ibn Saud in his struggle to conquer eastern and western Arabia, Fred Halliday records in the book Arabia Without Sultans. “The Ikhwan, however, refused to accept the territorial limits set by ibn Saud and took to attacking northwards into Jordan and Iraq,” he writes. “In 1930 ibn Saud, using motorised transport provided by the British, was able to crush the Ikhwan in desert battle.”

However, many of the Brothers subsequently displaced by the wave of Nasserism in Egypt and elsewhere found refuge in Saudi Arabia (much as Nawaz Sharif did), and for a while played an influential role propagating the faith.

Saudi Arabia, meanwhile, has gone out of its way to promote Wahhabism/Salafism abroad while keeping a stern eye on jihadist elements at home. It found the blowback particularly galling after sponsored participants in the Afghan jihad of the 1980s returned home (although it is worth recalling that the Grand Mosque in Mecca was seized by Islamist insurgents even before the Soviet intervention in Afghanistan). Yet it apparently saw no contradiction between repression at home and funding for deadly outfits abroad. In a cable released by WikiLeaks, then US Secretary of State Hillary Clinton laments the fact that, “Saudi Arabia remains a critical financial support base for Al Qaeda, the Taliban, LeT [Pakistan’s Lashkar-e-Taiba] and other terrorist groups.” 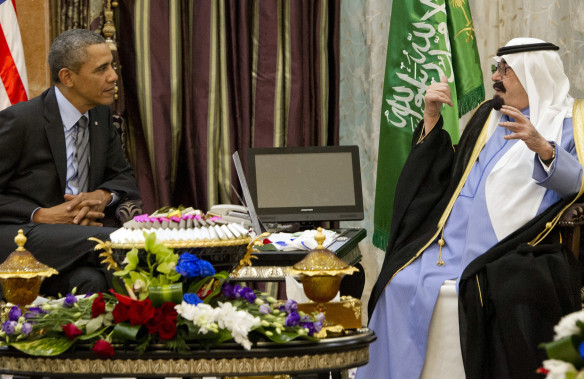 US President Barack Obama meets with King Abdullah on his recent trip to Saudi Arabia.

The Saudis may have, at some level, reconsidered their support for particular groups, but their paranoia about the Shia sect remains largely intact, and the palpable fear of Iran developing a nuclear weapon is only its most visible manifestation. The Iranian-Saudi rivalry precedes the Islamic Revolution: it goes back to days when both states vied for the status of America’s most reliable ally in the region — with Iran inevitably trumping the Saudis on the basis of its population and military strength.

The advent of Ayatollah Khomeini rendered the rivalry more clearly sectarian, and the Saudis backed Saddam Hussein to the hilt in his disastrous war against Iran. They were appalled when he turned on his Gulf Arab neighbours — but would have been relieved to see him remain in power rather than being replaced by a predominantly Shia government over which Tehran exercises considerable influence. The recent surge in sectarian violence in Iraq is often attributed to supposed Al Qaeda affiliates, but a Saudi role can hardly be ruled out.

The most belligerent Sunni fundamentalist outfits in Pakistan are also suspected of having Saudi connections — and Iran presumably backs some of the Shia organisations. There can be little doubt, though, as to which is the deadlier species. And while Syria may be the primary proxy battleground, countries such as Iraq and Pakistan are clearly sharing the pain.

Meanwhile, citing a range of sources, the BBC reported last autumn that the security/diplomatic grapevine was buzzing with intimations of a deal whereby, were Iran to go nuclear, Saudi Arabia would be able to purchase off-the-shelf atomic weapons from Pakistan. Inevitably, both sides vehemently denied the existence of any such plan for nuclear proliferation. It would be a fairly logical course of action from Riyadh’s point of view, given its declared determination to possess a nuclear deterrent in the event of Iran acquiring such weaponry.

Evidence of such a deal would not reflect too well on Pakistan, though — not least on account of previous allegations of proliferation. In respect of antagonising Iran, it would be a downright stupid thing to do. But it would fit a pattern of behaviour that has long entailed supplying not just weapons, but mercenaries to Saudi and various other Arab governments — with or without the odd US $1.5 billion thrown in as an irresistible sweetener.

Last year, US Secretary of State John Kerry visited Riyadh to soothe frayed nerves, with little success, and Barack Obama’s first visit to the Kingdom last month was planned with the same goal in mind. There is, for the moment, little risk of a rupture, even though Saudi foreign policy is closer to the equally right-wing Israeli model than to Obama’s flawed but relatively nuanced vision — and his apparent determination to avoid further military misadventures.

The US not only still needs access to Saudi oil reserves, but will do what it can to avoid catalysing a declaration of independence from Riyadh, which would only add to the chaos across the Middle East. The pull for Pakistan is even stronger, albeit for different reasons. No one could seriously question the logic of cordial, even fraternal, relations with Riyadh. But getting too close entails risks on both the domestic and foreign fronts — above all, the risk of repeating the grave miscalculations that characterised US-Saudi-Pakistan collaboration during the Afghan war of the ’80s. Mistakes for which all three nations continue to pay the price.

This article was originally published in Newsline’s April 2014 issue as the cover story.