Karachi has become attuned to getting great stage entertainment in recent years with successful renditions of renowned plays such as Phantom of the Opera, Chicago and Mamma Mia. So when director Shah Sharahbeel announced the production of Moulin Rouge, promising to bring lots of glitz and talent to the stage, theatre lovers were abuzz with excitement. For those who have seen the 2001 film version of Moulin Rouge starring Nicole Kidman and Ewan McGregor, the play might have appeared to lack the hypnotic magic of Baz Luhrmann’s acclaimed movie. But for what it’s worth, the local musical proved nothing short of being a high-energy, talent-infused, and beautifully choreographed play.

The plot was familiar, as was the dialogue, largely taken from the original movie. A poet named Christian (Hamza Ali Abbasi) moves to Paris and chances upon a cabaret, the Moulin Rouge, where after putting on an impressive performance, he is immediately adopted as the new writer and actor for the club. Meanwhile, we are told that the Duke of Westchester is going to visit the cabaret, and with the help of charming Satine (Joyanne Geary), the star courtesan of the club, the owner, Zidler (Abdul Aleem Shekhani), is hoping to rope in some investment to build a theatre for his nightclub. Satine is supposed to meet the Duke (Gohar Rasheed) privately in order to seduce him, but instead she mistakes Christian for the Duke and proceeds to make her sexy advances on him. As fate would have it, the pair fall in love and before we know it, a triangle is formed with the Duke as the third wheel, who wants Satine all to himself before committing to any investment.Satine is torn between saving the cabaret and being with the man of her dreams, while Christian wants nothing more but to spend his life with Satine. 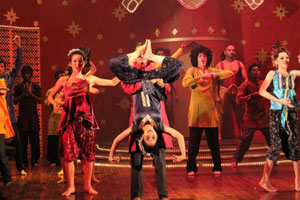 Comic relief came in the form of Chocolat (Syed Ammad Tahir), who made repeated appearances as a dancer with a lustful appetite for rich men, and Javed Saeedi who gave a commendable performance playing a narcoleptic Argentinian who occasionally dropped to sleep amidst the chaos around him. However, he wasn’t the only one falling on stage. Satine suffered from consumption, and tended to faint every now and then. Their falls were rather real, and must have resulted in some nasty bruises during their rehearsals.

The chemistry was apparent between the two lovers. However, charming as she was, Satine failed to deliver on the frailty and elegance that were required of her role. Christian, on the other hand, could not have been more heartfelt in his performance and displayed potential for blossoming into a fine stage actor one day. Gohar Rasheed also did well in playing the role of the arrogant and brashly Duke. His expressions were top notch as was his delivery. 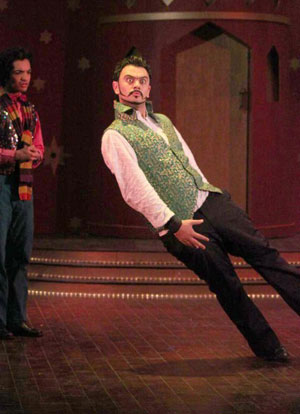 If there is one thing that marred the potential of this play, it was the terrible live singing, or lack thereof. Much of the ‘musical’ aspect of the play suffered the poor quality of the mixed tapes that played out of the sound system and were painful to the ears. The abrupt starts and endings of the songs were sharp and irksome, and could have easily been remedied with a few acoustic adjustments. The few performers who were courageous enough to sing their own songs, including the main hero and heroine, didn’t do a terrible job, but didn’t blow the roof off the joint either. The dancing and choreography, however, were tasteful, and came across as effortless.

The lighting was appropriate for the most part and was creatively dimmed to suggest otherwise censored content. The costumes were fabulous, thanks to Aamyre Tarique, who carefully designed them with the vibrant Bohemian theme of the play in mind. Set designers Khadija Akbar and Sahar Mullick created a very appropriate backdrop that easily transitioned from glitzy nightclub to the rather non-private room of Satine.

The play did well to encourage the aspiring artists who passionately want to bring more talent onto Pakistan’s theatrical stages, and this was definitely a step in the right direction, despite the technical shortcomings. Only next time, let’s hope for more live singing, and less lip synching.