I am writing on Jamil Naqsh — once again. The ’60s was when Jamil started to exhibit in Pakistan. That was also the time when I began to write on art and artists.

Jamil was the first artist I wrote about and also the one about whom I’ve written the most — my admiration for his work remains unabated with the passage of time. 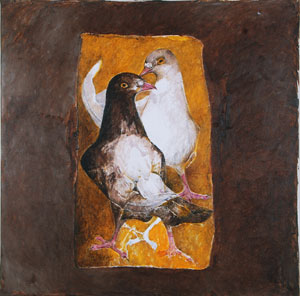 I was visiting Karachi after an absence of four years and Karachi’s newly laid maze of underpasses and overhead bridges made it difficult for me to find Momart — a gallery I had last visited at its inauguration 11 years ago along with my husband, the late Baseer Ashraf.

A look at some of the paintings at Jamil’s most recent one-day exhibition at Momart flooded me with memories — recalling days long past, people now no more.

My first write-up on Jamil was for a brochure for his predominantly blue solo at the Arts Council in Karachi in 1966. His journalist friend, Baseer Ashraf, whom I married soon after, had done most of the work of getting together that brochure. Baseer’s contribution for that brochure was a typical Baseer write-up, called ‘A Portrait of a Friend.’

My own comparatively short piece had described what I had felt after seeing Jamil’s paintings of the pigeons. To me they had seemed mysterious, other-wordly creatures. My feelings echoed what his daughter Mona Naqsh felt about her father’s art — that it had a metaphysical quality which “takes you to another marvellous world where his brush works and lines dream.” 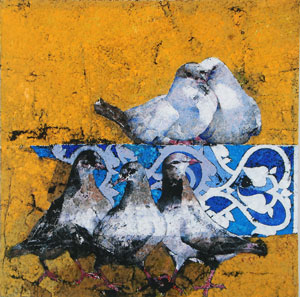 Writing about the March 4, 2010, one-day show, Tyaba Habib, a trustee of the Jamil Naqsh Foundation, had said: “This exhibition is completely different in tone, mood and ethos from those preceding it. The title (bur mazar a ghariban) is vaguely disturbing and carries images of loss, solitude and finality.”

But that was not what the exhibit conveyed to me. As I saw it, Jamil was paying a tribute to his feathered friends by focusing on them with all of his masterly magical skills as a painter — transforming his perception into magnificent, timeless images of beauty.

Floating in space, embedded in brick, peeking as it were from the torn pages of time, wrapped in flurries of light and movement, Jamil’s pigeons conveyed to me a feeling of the joy of life rather than a lament for the uncared tombs of the dead.

Of Jamil’s 41 oil canvases for this exhibit, only one featured a woman with a dove. Jamil had focused on the pigeons more realistically than ever before — reflecting his love for the living bird behind a painterly motif. A love which made the bird as much at home in his home — be it in Karachi or London — as in his art.

A bird he loves enough, as Mona told me, to feed at times, with biryani — and protest about its ill-treatment with an “incredible album of drawings, moving in the extreme…” 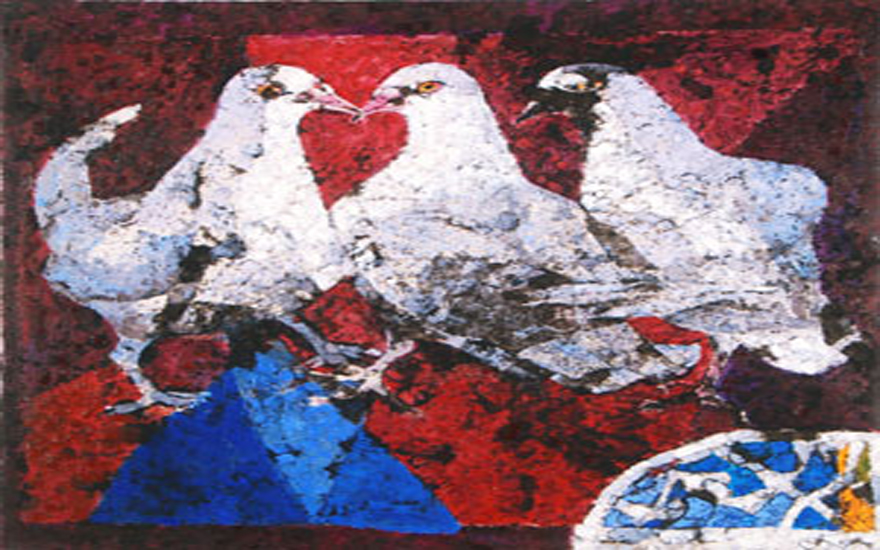