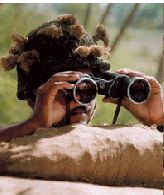 While the threat of ‘imminent,’ possibly nuclear Indo-Pak conflict has visibly receded — and like their respective countries’ state of alert systems, the citizens of both have gone from a state of waiting to exhale, to heaving a collective sigh of relief — celebrations may be somewhat premature.

As the American ambassador to India, Robert Blackwell put it, although the situation may now not be at a “white-hot level of crises,” it nevertheless remains “dangerous,” since “the structural elements that caused it are still in place.”

Foremost among these structural elements is, of course, Kashmir and the desperate bid by both countries to enforce a final solution — but, foreign pressure aside, with neither willing to yield an inch. The stalemate becomes potentially explosive because of the ground reality: a million troops still poised for battle, daily skirmishes across the border and resultant casualties, and continued aggressive posturing by the two countries’ hardline administrations, each mired by its respective domestic compulsions. Compounding the situation, the nuclear bogey. The current Indo-Pak military impasse is already the longest standing in the history of relations between the two states, and despite some easing of tension, the status quo remains unchanged: no war, no peace. But even a spark could ignite the tinderbox.

The question is, even if Pakistan were to honour in entirety the commitment western leaders maintain it has made to permanently halt cross-border infiltration, would India reciprocate in full measure, demobilise and engage in serious bilateral dialogue on all issues that plague Indo-Pak relations, including Kashmir?

Indian Defence Minister George Fernandes’ statement is telling: “Even though there has been a considerable decline in cross-border terrorism as well as infiltration,” he maintained, “deescalation is ruled out because we have no confidence in our neighbour, Pakistan.”

India’s Pakistan policy has always been dictated as much by internal exigencies and foreign policy objectives as it is by provocation by its neighbour. As Kissinger put it, “Pakistan is a thorn in India’s side.”

Never the best of friends, the stalemate between the two nations may have endured with occasional tensions and sporadic wars of words, but for September 11. India’s aim to find a permanent solution to Kashmir — which it unequivocally states is “an integral part” of the Indian federation — received a huge fillip by making common cause with the US’ war on terror. ‘The enemy of my enemy is my friend,’ was given a new twist in the context of Kashmir, as ‘Islamists’ everywhere, including Kashmir, became the western world’s common nemesis. 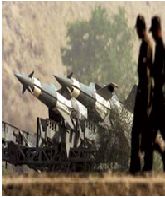 For the Kashmiris it was a double whammy. Their genuine freedom struggle had increasingly been subverted into ‘jihad’ by extremists from across the border and within, and in the post September 11 world order, that was a red rag for the west. As the US-led war on terror widened its net under the ever-belligerent Bush doctrine, India launched a diplomatic offensive, matched by a buildup of its war machinery on the ground, that succeeded in making Kashmir a flashpoint in the same war, and set Pakistan’s Kashmir policy unravelling.

India’s advantage in the situation can be gauged by the outcome of the attempt by Mexico’s representative to the UN to seek an informal meeting of the Security Council to discuss the Kashmir issue. India responded swiftly by launching a diplomatic offensive. Upon its urging, and pressure applied by its Russian ally, the member states abstained from the proposed meeting. Eventually, Mexico backed out.

If further proof were required of India’s diplomatic success in the Indo-Pak standoff, it was amply provided by Canadian Prime Minister Jean Chretien’s remarks at the recent G-8 Summit in Canada, of which he is currently the chairman. Said Chretien, “Pakistan must put a permanent stop to terrorist activity originating from territory under its control.”

Reports that the US is now pressuring the All Parties Hurriyet Conference in Kashmir, which had earlier urged a boycott of the polls, to participate in the October elections, is indicative that any solution to the Kashmir imbroglio the US may seek to broker is not likely to be in Pakistan’s favour. For India thus, it is strategically advantageous to carry the war threat as far as it will go.

With elections in Jammu and Kashmir scheduled for October, no change in status quo becomes even more of an imperative for India.

Acting Indian High Commissioner to Pakistan, Sudhir Vyas may echo Vajpayee’s statement in the Times of India that “India will not accept any claims by Pakistan [that it has stopped infiltration] till the terrorist training camps are dismantled,” when he argues that the demobilisation of troops at the Indian border is entirely contingent upon “evidence of Pakistan” permanently ending infiltration” and closing down its “terrorist infrastructure,” but even the outgoing Indian Minister for External Affairs, Jaswant Singh acknowledged that despite indications that Pakistan had started to honour its commitment to stop cross-border infiltration, troop withdrawal would not be initiated before the Jammu and Kashmir elections.

For the BJP government, strategy is determined by other compulsions as well, and recent developments do not yield much cause for optimism among those calling for peace. The cabinet and party revamp — the largest since the BJP government assumed power in 1999 — does not augur well for any softening of position on the Indian side. Said Congress Party spokesman Jaipal Reddy, “It is a complete takeover by the hardliners.”

Protestations by BJP functionaries notwithstanding, the party’s poor showing in the provincial and bye-elections and bleak prospects for the Lok Sabha polls scheduled for 2004, have clearly compelled the party to reassess strategy, reassemble forces and play the card that catapulted it from obscurity to political centrestage in 1986 — that of Hindu revivalism.

A natural corollary of this shift from the carefully cultivated “moderation” practiced by Vajpayee (the 1999 bus trek to Lahore and the Vajpayee-initiated Agra Summit of 2001) will inevitably be a more transparent and no-holds barred hardline stance towards Pakistan, particularly in respect of Kashmir. As a political analyst put it, “The Indian cabinet reshuffle does not so much signify a change in Indian policy as it does the fact that now the gloves are off.”

Although pressure by western powers has compelled India to demonstrate restraint in its standoff with Pakistan — and the deal has been made sweeter by assurances from the west of a permanent cessation of infiltration by Pakistan into Kashmir and sales of arms from Israel to India that the US had hitherto blocked — there are disturbing indicators that the current calm may not endure.

Reports that 30 alleged Al-Qaeda prisoners of the Northern Alliance, including several Pakistanis, had surreptitiously been flown from Kunduz in Afghanistan, via Dushanbe, to New Delhi — without even the knowledge of Hamid Karzai — sparked fears in Pakistan that this was yet another attempt by India to set up Pakistan. A military official maintained that the men, reportedly in captivity in an undisclosed location in Delhi, “could be framed in stage-managed acts of sabotage by New Delhi, to corroborate Indian claims that Pakistan is still despatching Pakistani terrorists and al-Qaeda operatives to foment trouble in India.”

Squeezed between the demands of the western community on one side, India’s refusal to demobilise and begin even a bilateral dialogue, and pressurised by hardliners within, who see Pakistan’s Kashmir cause increasingly threatened, Pakistan seems to be in a no-win situation.

President Musharraf’s risky two-pronged strategy post September 11 — playing ball with the US in Afghanistan and hardball in Indian-occupied Kashmir — has come to haunt him.

Piqued by repeated admonishments and continuing pressure from the west, frustrated by Indian obduracy in respect of deescalation, and held hostage by the hawks at home, Musharraf himself upped the ante recently. He maintained in two successive interviews with the BBC and Newsweek that neither would he commit himself to any permanent measures vis-a-vis cross-border infiltration, nor could he “care less whether they (India) deescalate or not.” He also declared that there was no question of accepting the Line of Control as a permanent border because “if we had to accept it as [such] why have Pakistan and India fought two wars?” Musharraf’s charged rhetoric prompted The Washington Post to state that Pakistan’s ban on infiltration is more a “tactical” move than a “policy shift.”

Against this backdrop, battle lines it seems will remain drawn for at least the foreseeable future — and the threat of war will continue to be used by both countries to further their respective objectives.

While the military standoff is costing both countries dearly, given India’s larger economy and consequently greater staying power, the toll being exacted on Pakistan is even heavier. The biggest losers on both sides are, of course, the people of the two countries. As long as the military standoff endures, urgently required funds for the development sector will continue to be diverted to bolster defence on both sides. Whether war erupts or not, human life remains cheap in the subcontinent.