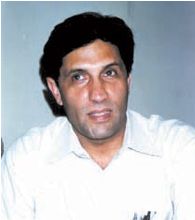 In 1999, OAK (Omar Asghar Khan), as he was known among his colleagues, and Sungi were facing tough resistance from the well- entrenched clergy in Hazara Region, particularly the areas dominated by Pashto- speaking tribes. Sungi’s development projects in remote villages of Hazara were, and still are, focused on sustainable agriculture, conservation of forests and empowerment of people, particularly women, at the grassroots.

On May 29, the day I joined Sungi, I found OAK and the organisation in a predicament. The Kissan Conference, scheduled to begin that day in a village of Pashto-speaking District Batagram, had been banned by the local administration under Section 144 as the religious elements of the district were agitating against it. They were alleging that Sungi and its leader, Omar Asghar Khan, were “agents of the Jewish lobby,” spreading western culture and obscenity and asking women to defy their husbands.

There was a crisis-like situation as the participants — more than one thousand from all corners of the country — had already started pouring in, and were not being allowed to enter the village Shamlai, or Batagram town. The armed extremists were taking out processions in the city threatening to attack Sungi’s zonal office, where OAK along with some colleagues and guests, was holding the fort despite pressure from the local administration, and threats to either leave the city or face arrest.

It was in this situation that I saw a determined and resolute young man — the scion of an upper class family, born with the proverbial silver spoon in his mouth — fighting for the weakest sections of society. Consequently, on a few hours notice, the venue of the conference was shifted to Abbottabad. It was a huge task as Sungi’s management suddenly had to accommodate more than one thousand participants for three days. In spite of that, the conference was a success because of the determination, commitment and skill of the man at the helm and his loyal followers.

Earlier, OAK had been confronted and attacked by the timber mafia and their agents. But he continued to strive for change, both social and political, in an area which is under the control and influence of various mafias and obscurantists. OAK won support and respect from people at the grassroots level because he engaged with them at their level and worked tirelessly for their socio-economic uplift. He once said, “Alliances need to be built with those at the periphery so as to create space for them alongside those at the core.” He would travel hundreds of miles, many times on foot, to meet the people in remote mountainous villages of the Hazara region.

We spent endless nights in those far flung areas with Omar, along with the villagers in their mud houses. And we were not always welcome. Often conflicts arose, which were largely instigated by extremist religious elements or other vested interests including members of the timber mafia and local influentials who felt threatened because of Sungi’s work for the awareness and enlightenment of the deprived communities.

OAK took the opposition in his stride, expressing the view that “raising consciousness and stimulating action to redistribute power enabling fair access and control over resources and opportunities is a primary objective of right-based civil society organisations. As they create space for the non-elite to assert their rights, the power elite exerts counter pressures to reclaim this space and maintain the status quo. Conflict is intrinsic to this engagement.”

When the state renewed its attempts to introduce invasive legislation to control the country’s NGOs, Sungi was at the forefront of the battle against such measures, even though it was already facing resistance from other quarters.

Despite the intensity and scale of the hostility, OAK endeavoured to promote the concept of people’s assemblies. He believed these would enhance the understanding of, and support for, right-based advocacy organisations and mobilise collective action to remove the inequities that marginalise large sections of the population.

Before joining the military regime, Omar consulted with the Programme Management Committee (responsible for running Sungi’s affairs), board members and friends in other civil society organisations several times. Interestingly, after the military takeover, members of intelligence agencies had visited Sungi’s head office in Abbottabad during a night raid and made enquiries about OAK’s personal character, belongings, relations etc., and we had naturally felt threatened by their interrogation. The next day Omar received a message from GHQ, Rawalpindi, that the military authorities wanted to see him.

He held a number of meetings with General Aziz and other officials, and was eventually offered a seat in the federal cabinet as minister for oil, gas and natural resources. However, Omar was interested in the ministry for local government and rural development so that he could pursue, and if possible, implement his ideas of development and local governance. For two or three days, there was no communication between OAK and the military regime. We all assumed that the authorities had thought better of their offer. Then came the message that Omar could have the ministry of his choice. OAK thus became a federal minister in the military government.

Surprisingly, while many of OAK’s friends in various civil society organisations supported the idea of Omar’s joining the military regime, many others who respected, revered and loved him were disappointed. In my humble opinion, this decision tarnished his otherwise impeccable credentials. Yet, even during his stint with the military government, Omar remained committed to democratic norms and remained a staunch supporter of people’s rule.

Thousands of people from almost every nook and corner of the country and particularly from the rural areas of the Hazara region — including many women — attended his funeral in Abbottabad. There was such a large crowd of mourners that it was impossible to get close to his coffin, or see his face. Not a single person in the crowd of thousands present accepted at face value the cause of death advanced by the police. Suicide? Omar, the fighter, the champion of right, brave and upright as he was, committing suicide — not possible.

OAK’s mysterious, tragic death is a huge loss for his family, for his nascent political party, for Sungi, for the people’s movement, and for a progressive, secular, just society. Mostly perhaps, it is a loss for the wretched whose cause he so passionately espoused throughout his life. Personally, I feel as if I have lost a dear friend.