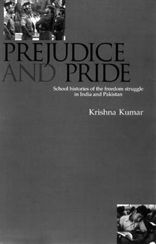 For most of the 142 million people of this country, the Freedom Movement and Partition are parts of a dim history, gleaned from the faint memories of relatives and from school textbooks. Whatever we learn as students is coloured by someone else’s perception and we are never allowed the luxury of interpreting events ourselves. As Pakistan and India teeter on the edge of war, it is important to understand the causes of our enmity.

Krishna Kumar, a professor at Delhi University, has undertaken a historiographical study of the Freedom Movement. His book, Prejudice and Pride, compares the ways in which a shared history is presented in Pakistani and Indian school textbooks. This is the first work of its kind, and shall hopefully spawn more interest in the subject.

Kumar talks of how a nation’s ideology is imparted to its young through education. Arranging the book topically, he looks at texts from various state and privately run schools in India and Pakistan and analyses the manner in which they present what are essentially the same facts. Kumar begins by talking of the challenges schools face in teaching history to children that have already been socialised. He thus also considers Indian and Pakistani societies and their separate concerns for teaching the young. India claims to be a secular society and in its texts tends to play down Hindu-Muslim violence during the Freedom Struggle. Pakistan, with its policy of Islamisation, shows how the two religious groups have always been in conflict. Education is seen as a way of imparting a national identity to the young. Heroes and villains are thus constructed in the narrative of the past. Gandhi, accorded near-deity status in Indian texts, is given little importance in Pakistani textbooks. Pakistan’s hero, Jinnah, is similarly given little status in Indian textbooks. Going through various school textbooks, Kumar shows how both countries distort, play down or simply ignore certain historical facts in order to present students with a certain image of the past. Pakistani texts, for example, speak of the 1857 rebellion as the last concerted effort by Muslims to regain their position of power in India. Indian texts speak of it as a revolt by a tired populace against a common enemy.

Kumar notes how state-run schools present a more doctored version of history to their students than elite public/private schools. Children attending elite schools are therefore likely to get a more balanced view of history than their poorer counterparts. In the last section of his book, Kumar cites essays written by Pakistani and Indian school children. Both groups, especially those from elite schools in their respective countries, believe that war is wasteful and futile and that India and Pakistan should learn to live peacefully with each other. The children, not fully indoctrinated in the language of nationhood, speak freely of war, Kashmir, the Independence struggle, Partition and cricket. The idea of Pakistan — having a separate nation for Muslims is debated by children in both countries, and Indian children unequivocally write of Pakistan with a certain sadness.

In his introduction, Kumar speaks of the “iron curtain” separating India and Pakistan, a curtain so thick that each side sees only what it wants of the other. Neither Pakistan nor India are willing to study and understand each other. When necessary, opinions rather than information are sought to validate preconceived ideas of the other. It is strange that countries so hostile know so little about each other. Kumar ventures that physical proximity and cultural similarities, as well as a shared history, are the reason for this indifference. Indians view Pakistan as a former part of their whole, and as such undeserving of separate study. It is telling that Indian school history ends with Partition and Independence in 1947. According to the Indians, Pakistan was wrenched away from the womb of Mother India. The resentment and hurt is still fresh in Indian minds, as evinced by school children’s essays, included in Kumar’s book.

Prejudice and Pride is a well-written, analytical book. It forces readers to evaluate their understanding of a common history, and to see it from the perspective of the other, demonised side. Kumar’s attempt to look at the school histories fairly and without undue bias is commendable. However, as a product of the Indian system, he has been raised with certain beliefs and opinions. These manifest themselves in his style when writing of Pakistani textbooks’ shortcomings. On the whole, however, Kumar has taken a huge step towards understanding Pakistan and India’s differing views. For countries with such a shared past, it is imperative to make sense of it together. As the Hutus and Tutsis understood after their genocidal war in Rwanda, to live together in peace, one must first come to terms with history.