On March 25, Fakhra Younus’s body reached Karachi airport amid a throng of reporters, MQM party workers, prominent MPAs, women’s rights activists, relatives and sympathisers. Against a sky lit more by camera flashes than the sun, the national flag was draped over her coffin, which was then lifted onto an ambulance as slogans calling for justice reverberated in the background. In her death Fakhra received the attention she yearned for in her 12 long years of self-exile.

Fakhra’s sordid tale was all but forgotten whenNewsline interviewed her last year in Rome. “Thank God you called…at least someone still remembers,” Fakhra had remarked — her loneliness was almost palpable. Twelve years ago, 20-year-old Fakhra was brutally disfigured in an acid attack. Throughout her life she maintained her ex-husband, a powerful ex-MPA, Bilal Khar, carried out this act. She had spent the remainder of her life in Italy as a political refugee, undergoing painful facial reconstructive surgeries. On March 17, she jumped from her sixth floor apartment ending her life, leaving behind her only son, Nauman, aged 16.

Fakhra’s suicide prompted a flurry of media activity and finger-pointing. Bilal Khar — who today lives in Kot Addu with his fourth wife and children — took the stage proclaiming his innocence, sanctimoniously declaring that it was a mistake to marry her in the first place. Concurrently our country’s self-styled leaders did not waste any time in rushing to the pulpit. MQM supremo Altaf Hussain took up the mantle for acid victims nation-wide, and prominent politicians like MNA Khushbakht Shujaat and PML-N’s Marvi Memon made haste to join the cause. But 12 years ago when Fakhra needed this support the most, she found all doors slammed shut. Her pleas for a passport were spurned under the Musharraf regime, which feared any international publicity would bring disrepute into the country. The case filed against the influential Khar resulted in his acquittal, as all witnesses, including Fakhra’s own sister, turned hostile, reportedly under pressure. Meanwhile Fakhra was transported to Rome, with the help of her true saviour and only friend, Tehmina Durrani.

Holed up in her one-bedroom flat in Rome, reliant on Italian government handouts and a few friends, Fakhra lived from surgery to surgery. In need of serious financial help, she had turned to the Pakistan Embassy in Rome, but yet again the country and its officials turned their backs on her. She was forcefully escorted out of the embassy and taken to the local police station where, she recalled, even the police officers shook their heads in dismay at the treatment meted out to her by her own people. Fakhra longed to return to Pakistan, to speak her language, to be among family, but most of all to fight for the justice that had been denied to her 12 years ago when she boarded the flight to Italy, disfigured and dejected. 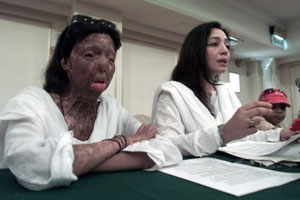 Fakhra was a brave woman who retained her dignity even in the most trying of circumstances. She raised her teenage son alone in Rome, in debt and reliant on the Italian government’s genorosity. In a phone call made to me just two weeks before she died, Fakhra expressed her desire to see her autobiography, Il Volto Cancellato, (The Erased Face), translated into Urdu and English. She had seen the Oscar-winning documentary, Saving Face in the news, and saw hope for herself and others like her. She was cash-strapped and needed the proceeds from the sale of her book to pay for her daily expenditures. But, more importantly, she did not want her story to be forgotten. In her suicide note Fakhra wrote that she was taking her life because of the insensitivity of the leaders of Pakistan and their laws, which could, but would not protect victims like her.

Where were this country’s elected officials when a beleaguered citizen needed them the most? Not only did they not step up to their responsibilities, they hindered every attempt to rehabilitate her. Fakhra’s death rests on their shoulders, those who abandoned her. Today every elected official should hang his/her head in shame because a foreign country, that was in no way responsible for Fakhra and owed her nothing, did for her what her own refused to do. “Where were these people when Fakhra was being shunned by every other person and needed protection 12 years ago?” Abdul Sattar Edhi angrily demanded — a question that should resonate with every Pakistani.

Acid attacks are prevalent in Pakistan, used mostly by men as a show of power to exact revenge. One can only hope that Fakhra’s death and the international publicity received by Sharmeen Obaid’s Oscar-winning documentary jolts the nation awake and a severe and stringent law is drafted to deter future offenders. More importantly, there is a need to look deep within ourselves — Fakhra’s story stands testament to a misogynistic mindset that infects the very fabric of our society, a deep-rooted patriarchy that breeds egotists and punishes women who dare to oppose them. Fakhra’s suicide recently prompted a joint session of the National Assembly, which unanimously called for more stringent laws against acid crimes. Bilal Khar’s name was, however, struck from record. It is important that Fakhra’s perpetrator is identified by a transparent investigative committee and severe punishment be exacted so her case can serve as a warning to even the most powerful of this country.

This article was published in the April 2012 issue of Newsline under the headline “Too Little, Too Late.” Look out for the April issue at newsstands across Pakistan.