Back to the future and Pakistani terra firma, a breed of local babes have also come a long way — even while others have gone in the diametrically opposite direction.

Welcome to the new-old Land of the Pure, where the fourteenth and twenty-first centuries arm-wrestle for greater space, where many of the once hip and happening are now the holy, hijabed and housebound, as others of their sorority break boundaries, traverse bold frontiers and make for a brave new world.

The dichotomy is in your face — on the streets, on billboards, and most visibly perhaps, on the ubiquitous idiot box. Here the burqah and the beard, the revolving faces of power, and hand-wringing Heep-ish lobbyists for one party or the other, face off with twenty, thirty, forty and fifty-something women hosting a myriad talk shows and news programmes. Here, no matter how high the moral ground claimed by the custodians of righteousness, how glib the politicians’ platitudes, and how loud their clamour, the women putting them on the mat will not be shouted down, not be silenced.

On national television at least, all things are ostensibly equal, anything is possible — not least because of the grit and gumption of a band of women who are undaunted by the misogynistic mindset of the ‘moral’ brigade, the chauvinism of the sexist one and the dangers inherent in charting new courses and marching on ground even few men dare to tread.

Cut to 2006. Rather than having to rely on reports by the western media, Pakistani audiences were provided incisive live reports and eyewitness accounts of the Israel-Lebanon conflict, not by the BBC, CNN or Al Jazeera, but by the determined and spunky Geo anchor (now with Samaa TV), Asma Shirazi, who was despatched to the war site and remained in the combat zone throughout the conflict. Interestingly, Shirazi dons the hijab, sending out the message loud and clear that there is no conflict between her faith, her chosen mode of dress and the freedom to negotiate the world on her own terms.

So too there is Munizae Jehangir, giving local viewers live footage from some of the country’s most violent trouble-spots, often at the risk of her life, Naseem Zehra, who refuses to cede even an inch in her talk shows to sacred cows who try in vain to skirt issues often of paramount national importance, Sana Bucha who takes her Lekin, like Klee’s line, out for a walk, Ayesha Tammy Haq, who takes in the world in her wide-ranging show — and often takes on the world when discussing contentious issues, Quatrina Hosain, Shaheen Salahuddin, Mehr Bokhari, Jasmine Manzoor and women anchors in all the regional channels…the list reads on. And when it’s not political or social reportage, these pioneering Pakistani women dare to speak of the hitherto unspoken: incest, pedophilia, abortion.

‘No sex please, we’re Pakistani,’ is now so 20th century.

There are of course still some strictures that come with the terrain: assorted networks’ commercial ratings-driven interests, owners’ political biases or desire to grind personal axes and talk show hosts’ own choice of self-censorship — based interestingly not on gender issues but on a social milieu that dictates the rules of the game. As Sana Bucha says, “There are certain debates I cannot have on television, not because I’m a woman, but because our society cannot take it.”

And anyone who told you that women in field journalism or national television breaking the mould of traditional breakfast and shaadi.com shows have had a harder time of it than their sisters in ostensibly more women-friendly western environments, needs to consider this.

When Hani Yusuf, a young woman reporter with an internship at Newsline and a Masters from Columbia’s graduate school of journalism, was recently invited to work at the foreign desk of a prestigious German national daily, she found herself on the wrong side of the gender divide. To begin with, the heavily male-sparse female ratio meant she was just one of a handful of women on the editorial team, big news stories were firmly kept out of her reach and in the men’s domain, and she was patronised and ignored in turn. A Norwegian male colleague put her dismal situation in perspective: “You’re a woman.” 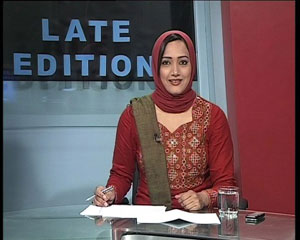 Back home, even while misogyny and sexism thrive unabated, curiously many women journalists in the field report that of all the seemingly insurmountable hurdles they have had to face to get their job done, gender has been, perhaps, the least of their problems.

That resonates in my experience. When I embarked on my personal journey, as a young 20ish reporter in the ’80s — the dark, despondent Zia-ul-Haq era — full of bravado and a foolish naivetÃ© only ivory towers foster, I recall driving alone to riot-ridden, blood-drenched Orangi, entering dark rooms of musty jails where prisoners on death row spent their last days, and doing a virtual safari in Heera Mandi when the flesh bazaar still existed in all its decadence and pathos, and never once encountering any overt gender bias — even if my youth and class issues sometimes stymied the way.

Meanwhile, even as Benazir Bhutto was soon to become, at 35, the youngest ever Pakistani head of state, one of the youngest in world history and the first Muslim woman at the helm in the modern age, in the liberated US of A, voters — including those of Italian descent — were almost rabidly reluctant to even consider Geraldine Ferraro as Vice President of America. Said an Italian New York cabbie to me when I asked, “Italian, schmallion, she’s a woman.”

And therein lies the paradox — and hope. Will the real Pakistani mindset please reveal itself.

There are the endless reports of the vilest crimes against women, laws that seem to sanction these, and an ever-expanding canvas of women adopting attitudes (and attire to match) that reflect not the hankering for a utopic ‘Pan-Islamic’ world that one could perhaps understand, even subscribe to, but a growing alienation from ‘the other’ — the vast, nebulous mass of all those that do not conform to their increasingly insular, increasingly exclusive world order.

But simultaneously, there is the connectivity yielded by the digital age, where all information is available by a click on the keyboard, and which is a new generation’s lifeblood — and lifeline.

And this, along with an intrinsic part of the Pakistani psyche — male and female alike, past and present, which subscribes to logic and rationale, to peace and progress, and has a recognition of the need to become part of the world community rather than a pariah, without surrendering sovereignty or religious and cultural values, which not just permits, but exults in Benazir Bhutto’s ascent to power, which reveres sufi maestro Abida Parveen and gyrates with pop-rock princess Kiran Chaudhry, which celebrates filmmaker Sharmeen Obaid Chinoy, and which allows the bold and beautiful to have their say on television platforms across the country — is where hope dwells.

They say, ‘You can’t keep a good man down.’ Clearly not a good woman either, if she chooses to just do it. At the end of the day, nothing succeeds quite like success.

This article was originally published in the April 2012 issue of Newsline under the heading “Breaking News” as part of a larger cover story on women in electronic media.