Karachi is known informally as the city of lights, an ironic title given its current state of anarchy and chaos. In the early days after Partition, Karachi was a beacon of hope and opportunity for migrants who came from everywhere. Fast forward to several decades later and Karachi has aged tremendously. It is no longer a starry-eyed child nurtured by ambition. Instead, it has become a deranged, angry soul, a violent, turbulent, bi-polar manifestation of hurt, pain and strife. If Karachi were a person, has anyone considered how much psychotherapy it would need?

2012 began as a relatively peaceful year compared to 2011, when target killings were rampant and culminated in July’s infamous bloodbath where more than a hundred people lost their lives in a matter of three days. Now it seems that the halcyon ‘peace’ of Karachi has, once again, spiralled into anarchy and nothing has changed much in the past year.

While the government has lurched from crisis to crisis, little alleviation is in sight for the common man. Rising inflation bolstered by higher fuel and electricity prices has driven the common man to the brink of misery and deprivation. The latest in a series of unnecessary violence represents not only the state’s failure to protect society’s most vulnerable, but its complicity in promoting a culture of fear and violence that goes unchecked.

Karachi is a hotbed of political activism. In a city teeming with over 18 million people, political conflicts have evolved over time into ethnic conflicts, most prominently between the city’s Pakhtun migrant population and the so-called Muhajirs, represented by the ANP and MQM parties. To add to the mix are numerous smaller political outfits or religious sectarian groups. Rivalries between these two have often spiralled into uncontrollable bloodbaths.

And so within this convoluted scenario, in the early morning hours of March 27, an MQM worker and his brother were assassinated. Immediately, the city was imposed with a shutter-down strike ostensibly for ‘mourning’ purposes by the MQM. With public transport suspended and the looming threat of violence, most opted to stay indoors and out of sight. More than Rs 10 billion was the estimate of the tremendous loss hitting industrial producers, traders and manufacturers. In addition, losses caused by burning cars, public transport and petrol pumps were common around the city. Around 45 vehicles were reported torched by angry mobs, with little prevention by the authorities. Industrial production units remained closed. Worse still, 11 people were reportedly killed in indiscriminate violence across the city. 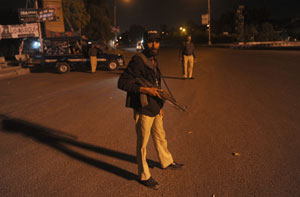 Arif, a gardener who lives in Manzoor Colony, describes the killing of a local shopkeeper in harrowing detail. “The gunmen came once and ordered him to close shop. They returned soon afterwards, a second time, and warned him again while the shopkeeper was in the process of literally pulling down his shutters. The third time, they didn’t even hesitate, they just shot him point-blank in the chest, even though he was closing up.”

The madness did not stop there. On Wednesday, March 28, the killing of two ANP activists triggered another wave of chaos as 53 vehicles were torched and another 14 people killed. Subsequently, on March 29 another strike was called, this time by the ANP. According to Atiq Mir, the chairman of the Karachi Transport Ittehad, even though approximately 80% of the city’s markets defied the orders to close shop, transport problems prevented the supplies of grain, fruit, vegetables, livestock, pulses and medicines from reaching consumers. Mir claims this alone cost small traders a daily loss of Rs 2.5 to Rs 3 billion. This does not taken into account the ongoing loss to industries or manufacturers.

Perhaps, the hardest hit were the daily wage labourers. An estimated 2.5 to 3 million people in Karachi subsist on daily wages; 40% of labourers in the Korangi Industrial area alone are daily labourers while in areas like SITE, 60-70% are reputed to survive on daily wages. A strike, therefore, not only deprives these labourers of their daily livelihood, it deprives their families of eating even a single meal a day.

Danial, a Christian tailor, earns approximately Rs 3,000 a week. Losing a day of activity costs him and his family at least Rs 600 — an uncomfortable prospect, especially since he has to support seven children and his ailing mother. His wife, Safia, works as a sweepress. On days wrought with violence, if the couple can afford it, they pool in with others from their community to secure a private taxi to drive them to their place of work, to earn their daily wages. Similarly, Rashid, who works as a driver, describes how his neighbors from an ANP-dominated area, pool together their funds with him and collect Rs 500 to pay for a private taxi. “There’s no other way. And these taxi-operators are just as crooked as those shutting down life around us — they charge us exorbitant rates. But what do we do, our hands are tied. If we don’t work, we can’t feed our families. If we go to work, we risk being killed,” he says.

The city’s authorities and the PPP-led government have been powerless to protect the citizens of Karachi. As Atiq Mir reiterated, security in the city is insufficient to protect businesses and workers since extortionists roam openly without any fear of the law. Fresh investments from traders are halted as they struggle to cope with their financial burdens. Ordinary workers struggle the most. The prospect of any financial normalcy returning to Karachi seems bleak.

For the third time that week, Friday, March 30 saw late-night incidents spiral crazily into violence where 13 people were killed, leading to another shutter-down strike call for Saturday, March 31. The week alone has seen three days of strikes causing billions of rupees of loss to the citizens of Karachi. If this continues, there won’t be much of a city left to protect. The violent, bi-polar tendencies of Karachi switch from normal to a warzone in the space of a few hours, depleting the patience and security of its citizens. One can only hope that the present government, instead of touting democracy as the saviour of the country, musters the courage to fire-fight this current mayhem, bring the miscreants to justice and prevent any one political party from shutting down Pakistan’s economic hub. Judging by their current efforts, however, there is little hope in sight. Karachi remains, an ignored, troubled soul, always on the verge of yet another usual bout of bloodletting and pain.

This article was originally published in the April issue of Newsline under the headline “City of Blights.”