In the wilderness of Sindh’s interior, the sleepy town of Dokri is home to one of the world’s greatest ancientwonders: the houses, granary, baths, assembly halls, towers etc that make up the fabled Moenjodaro on the banks of the River Indus.

Today, this magnificent archaeological site is on the verge of total destruction because of official apathy and corruption.

According to local officials, out of Moenjodaro’s 370 walls, nearly 150 are on the verge of collapse. Though the budget allocated to preserve the country’s heritage is always a pittance, the reasons officials cite for this latest tragedy is the fact that there are no funds at all allocated for the upkeep and maintenance of one of the historical wonders of the world. “They have not allocated even a single penny for the current fiscal year for preserving Moenjodaro.”

A visit to these ruins reveals the extent of damage caused by the state of negligence. According to experts, the DKG area in particular, needs immediate attention because recent rain-water has seeped into the crevices, and damaged the majority of the structures creating cracks in walls. The leaning walls are clearly visible and even a layman can see that these walls will not be able to withstand one more bout of the incoming monsoon rains. The rains have affected other areas as well. Some portions of the stupa, as well as other structures, have also been badly damaged. Given that the ground is permeated with salts, archaeologists say, whenever it rains, the rainwater will carry ground-salt with it, corroding everything in its path. “In most cases, rains disintegrate the structures and constant vigilance is needed to keep the structures intact,” says an official at the site.

Moenjodaro, also on UNESCO’s list of world sites for preservation, is crumbling, not only because of ignorance, but also due to misappropriation of funds. Only a few years ago, fed up with official corruption in Pakistan, UNESCO threatened to remove Moenjodaro from its list of world heritage sites. “These world bodies donate funding, but instead of spending the money for the upkeep of the monuments the funds are misappropriated through salaries awarded on paper to phoney consultants, or used to line the pockets of local government officials and fund their inflated travel allowances,” says a local official in Larkana. 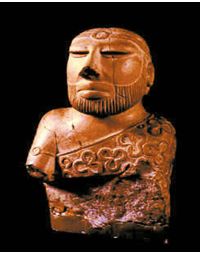 The nazim of Larkana district wrote several letters to the federal government asking them to either hand over the control of the upkeep of the ruins to the district government, or send experts as well as funds to preserve the site from further decay. To the dismay of local government officials, they found that a Committee for the Preservation of Moenjodaro had already been established and members were drawing huge salaries from international funds allocated for the Authority for the Preservation of Moenjodaro. However, all the Authority officials are based in Islamabad, a 1,000 miles away from the site. “Actually some members of this committee visited the site, stayed in the hotel for a couple of days, had fun and disappeared,” says the DCO Larkana district. “They did not visit the site for any serious investigation.”

Archaeologists maintain that a minimum of five people are needed for the upkeep of one section. Since the ruins are divided into seven sections, a skeleton staff of 35 is required. At the moment only 10 people are working on the seven areas of the site. Likewise, the only engineer working on the site was transferred a year ago and the authorities have yet to replace him. “It is humanly impossible for 10 people to supervise such a huge area,” says a site official. As a result, even when visitors come to the site, especially during the holidays, they walk all over the already crumbling structures. Since only one-third of Moenjodaro has been excavated, sometimes the rains expose unexcavated artifacts which are carried away by visitors. “When they have appointed staff for a committee to protect Moenjodaro, what are they doing in Islamabad? Why don’t they move them or their office to the site where staff is badly needed?” asks Khursheed Junejo, nazim of Larkana district.

Official apathy can be gauged from the fact that only two years ago, unknown criminals broke into the Moenjodaro museum and took away 40 important seals. These rare seals were discovered from over a dozen sites. The seals were engraved with animal motifs, especially bulls, while many seals were inscribed in a script, which is yet to be deciphered. The stolen seals include one which depicts a unicorn and seven pictographs, another depicts animal figurines and 10 pictographs on one side, and still another features an elephant and manger on one side, and four pictographs on the other.

A detailed inquiry conducted by the local police revealed the involvement of some senior officials of the archaeology department, as well as a UK-based archaeologist in the theft. The local police requested the archaeology department to hand over the accused to the police for interrogation. A seven-page-long report submitted to the authorities said the police have got solid evidence that the three main accused in the theft had met with two archaeologists 12 days before the robbery. “We have collected evidence that shows that they had met with the accused in a seminar organised by UNESCO for the preservation of the ruins of the Indus Valley Civilisation, that was held 12 days prior to the theft,” says the report. During the investigations, police officials also discovered that earlier some 120 old seals from the museum had been replaced with replicas. “One of the museum officials, who was involved, was forcibly retired by the authorities, but no major action was taken against him and the case was hushed up,” the report noted.

The report not only demanded the arrest of these two archaeologists, but also raised doubts about the authenticity of the rest of the artifacts in the museum. “We have many doubts about the originality of the artifacts on display in the museum. They have to be re-certified,” the report said, questioning the credibility of the official curators of the museum. However, all requests from the local police that the archaeology department hand over the two officials have remained unheard.

Official apathy towards these archaeological treasures has a long history. In the 70s, at least 171 recorded rare objects, including some seals that belonged to the Moenjodaro museum, disappeared without a trace and no inquiry has yet been initiated into the scam. Sources said that at least one of the missing seals was later spotted at an auction at the Christie’s Amsterdam auction house in 1990. This square seal depicting a unicorn and six pictographs had been officially excavated from Moenjodaro and its picture published in Marshall 1931 III, pl. cxv, no 549, with a museum number: 55.35, clearly inscribed on it after 1971. Intriguingly, most of the old registers in which these objects were recorded were later replaced by new registers that do not mention the missing objects at all. The old registers, meanwhile, have disappeared.

The late Professor Syed Ghulam Mustafa Shah, who jointly edited the book, Corpus of Indus Seals and Inscription, with Asko Parpola of Finland, mentioned in the preface that of all the seals discovered by Sir Mortimer Wheeler in 1950 during his excavations at Moenjodaro, only one is currently displayed in the museum. Some years ago, a seal was seen in a private collection in Monaco. Archaeologists and other researchers have demanded that the government carry out a thorough inquiry into the case, but nothing has been done so far.

According to informed sources, whenever the issue of Moenjodaro is raised, the authorities in Islamabad claim that they don’t have enough funds available for the maintenance of the ruins of Moenjodaro. This is absolutely untrue. According to inside information, funds amounting to 0.934 million US dollars provided by UNESCO after two agreements signed during 1991-1992 and 1991-1994 are still lying unused with the federal government. Not a single penny has been spent on Moenjodaro from these funds. Inside sources maintain that UNESCO has been pressing the government to either return these funds or use them for the allocated purpose. However, to date, neither have these funds been returned to UNESCO, nor has any work been initiated in Moenjodaro. Similarly, in the wake of the rain damage during the 2003 monsoons, UNESCO sanctioned 10,000 dollars to the department of archaeology for measures to save the structures from further decay, but these funds again, could not be utilised and the authorities had to return the money to UNESCO.

Apparently UNESCO has, once again, offered the federal government 15,000 dollars to undertake preventive measures before the coming monsoon, but so far no work has begun on the site. Deliberate and wilful official callousness and corruption is responsible for the slow, but steady destruction of this invaluable historical site.